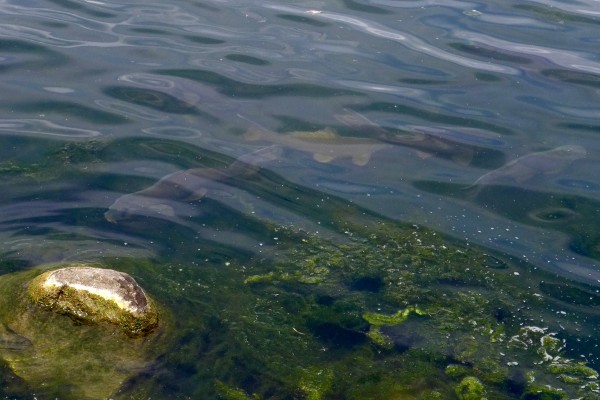 Carp spawn on the shores of Lake Mendota on May 25, 2016. Photo: Kelly Tyrrell, UW-Madison

Last Wednesday, the Center for Limnology at UW-Madison shared the following tweet from a graduate student in the department:

If you’re near @WiscLimnology or @LakeMendota today – stop by the shoreline to witness carp spawning. Hundreds of carp + clear water phase!

We wasted no time hurrying down to the shoreline to catch these large fish in action. Thanks to Mendota’s healthy clear water phase this year (related to things like algae and a tiny clean-up critter called Daphnia), it was easy to see the common carp, Cyprinus carpio, mingling amidst the lake weed.

(Common carp, says limnology graduate student John Rodstrom, should not be confused with the highly invasive species typically known as Asian carp, which threaten the Great Lakes region. While common carp are not native to Wisconsin – they hail from Eurasia and Rodstrom says they are considered a nuisance in many areas  – in general, they are now well-established throughout the U.S. except in Maine and Alaska)

The fish – which can surpass the weight of an 8-year-old child – swam together, swirling, their bodies coming close before they parted again. Like in a dance, fish swam close to shore and away again.

“Common carp are broadcast spawners, meaning that they release their eggs directly onto the substrate without making any kind of ‘nest’ and they do not take care of their fertilized eggs,” says Rodstrom. “Males fertilize the eggs after the females have released them.”

As such, multiple males likely fertilize the eggs of any given female during spawning season. Females may lay up to 2 million eggs, which compensates for the high mortality of the developing or young fish.

“If a high percentage of your offspring aren’t going to survive, it helps to have a lot of them,” says Rodstrom. 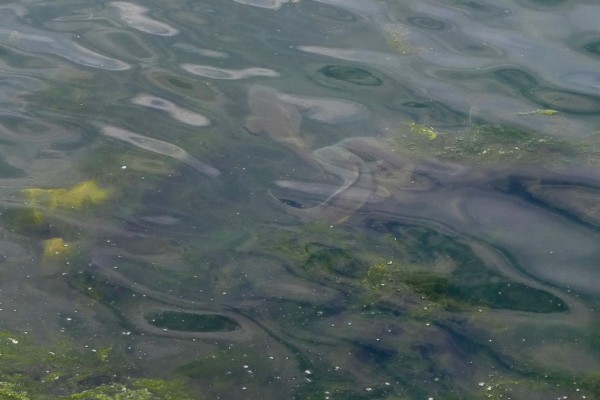 Carp can be the target of anglers when they spawn, due to their high concentrations at the edge of lakes and Rodstrom says the state record for a common carp is 57 lbs. 2 oz. using hook and line,  59 lbs. 0 oz and was 46 inches long caught by alternative methods such as a spear, bow and arrow, or crossbow. Other than humans, large adult common carp have very few natural predators.

However, Rodstrom says carp themselves can be detrimental to native fish and plants. The fish feed on the lake bottom, stirring up sediments that can reduce water clarity and release settled nutrients, leading to algal growth. In 2013, UW-Madison and Wisconsin Department of Natural Resources scientists – including Dick Lathrop, Kurt Welke and David Liebl – published a review of efforts to manage water quality in Lake Wingra, primarily through work to remove carp from the small lake. The results, captured in photos, show a dramatic impact on the lake.

Though carp spawning may have already drawn to a close, Rodstrom says it’s still a great time to catch other fish performing their annual at-shore ritual.

“You can also see native fish spawning right now, such as small mouth bass. The clear water phase of the Madison lakes is a great time to observe many fish species near shore,” Rodstrom says.

And of course, the fish will be at it again next year, when the lake reaches the right temperature and conditions are just right for the dance.