Home » Animals » Dragons and turkeys and insects, oh my! A day in the life of an animal control specialist

When a foot-long bearded dragon appears on a rock near Bascom Hill, or a turkey flies through a stained-glass window in Science Hall, who do you call? It turns out, the answer is almost always Richard Ness, an animal control specialist for UW–Madison’s Facilities Planning and Management.

To find out what a day in the life of a campus animal control specialist looks like, I talked to Ness about some of his more unusual encounters. Later, I joined him as he responded to calls.

An alumnus of the university, Ness has both a Bachelor’s and Master’s degree in entomology, and these days, insect calls make up much of his work around campus. However, he occasionally gets oddities like the sun-basking bearded dragon, spotted just after students left for summer.

“It really was like any other call, and it really wasn’t hard to find,” says Ness. “Usually lizards are really quick, but it just sort of sat there.” 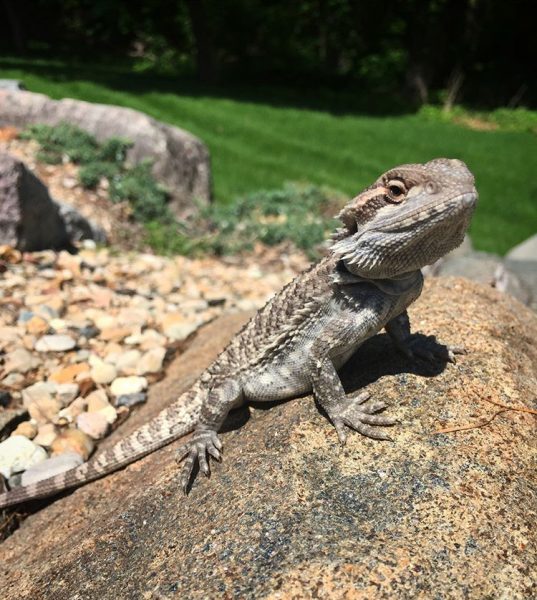 Found just outside of Bascom Hall, this foot-long bearded dragon seemed quite calm as Ness gently captured it. Photo by Mason Muerhoff.

To catch it, Ness waved a butterfly net to distract the lizard as he approached, but it sat so calmly that he was able to gently grab the lizard from its warm, sunny rock.

“It was so easy to catch, it didn’t even flinch,” Ness recalls.

Originating from Australia, bearded dragons are often kept as pets due to their hardy nature and easy care compared to other exotic reptiles. Ness assumes this one was a pet released by a student that was moving out.

The turkey, however, was not so calm. After flying through a stained-glass window in Science Hall, the disgruntled bird – ostensibly upset that a glass window had got in its way – stormed around the lobby of Science Hall as Ness tried to shoo it out the front door. Finding no luck in this strategy, Ness eventually grabbed the shrieking turkey and released it outside, where it strutted off to be annoyed by something else.

A simpler call involved a flying squirrel that somehow found its way into a campus office.

“A lady called and nonchalantly said: ‘Hey can you come by the office, I have a flying squirrel here,’” Ness recalls.

Seeing as the woman had already caught the squirrel and placed it in a box, Ness was tasked with finding a suitable place to release the animal.

He phoned David Drake, a professor and extension wildlife specialist for the UW–Madison Department of Forest and Wildlife Ecology, who recommended Ness release it near any forested-area off campus. These animals are native to Wisconsin.

“I get bat calls fairly frequently, but they’re easy to catch,” he says. “The things that keep me busy are mice, roaches and ants.”

On our ride-along, I gained a better understanding of what a typical day looks like for Ness. Insects were the subjects of two calls.

The first involved an ant colony that infested an electronic parking meter. When we arrived, the parking meter had already been shut off and a few ants crawled around the face of the machine. 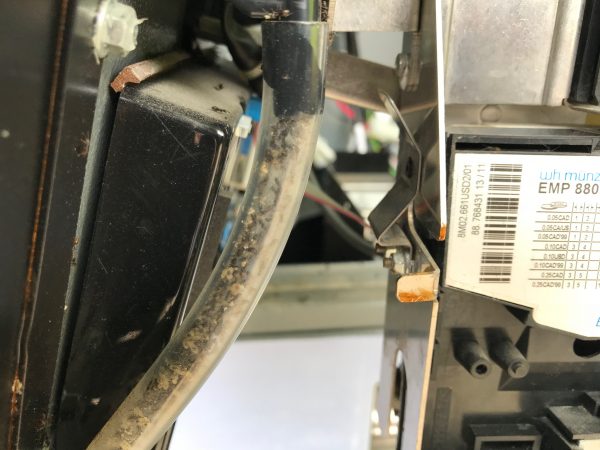 The invading ants found a particular clear tube as a suitable place for their eggs. Photo by Tyler Fox.

However, when the service door was opened, hundreds of ants poured out of the machinery and crawled out of the many nooks and crannies. Using a flushing spray, Ness forced the ants out of their metal residence.

Suspecting the species to be odorous house ants, Ness collected some samples and took them to the university’s Insect Diagnostic Lab, which confirmed his intuition. The name comes from a unique coconut smell given off by the ants when they’re crushed.

The next call involved cockroach sightings in a nearby campus building, a call he receives frequently. Ness explained that one of the easiest ways for cockroaches to get into campus buildings is through abandoned drain or sink pipes.

Once the water evaporates in the plumbing, roaches living underground follow the air current up to the surface, which often leads them to forgotten sinks and drains.

Exploring the basement of the building in question, Ness couldn’t locate any primary sources of intrusion for the roaches. However, he did spot some rather large roaches and subsequently exterminated them, while I observed quite a distance away.

These are just some of the experiences that make Richard Ness’s job so unique, and campus couldn’t function without his help. I thank Richard for allowing me to accompany him on his journeys for a day and I wish him good luck in his future animal endeavors.