A rare bird species, the Kirtland’s warbler, has experienced variability in its population in recent decades. But now, the small yellow-breasted songbirds are branching out into new terrain, with historic success.

Sitting comfortably at about 4,000 individuals, the Kirtland’s warblers have started leaving the now-saturated real estate in their native Michigan jack pine forests in search of new homes.

In 2007, eight male Kirtland’s Warblers were documented breeding on a red pine-dominated timber plantation in central Wisconsin. And just two years ago, the birds were spotted breeding in northwest and northeast Wisconsin, too.

The question now is why, and how, they have able able to expand into Wisconsin with such success. 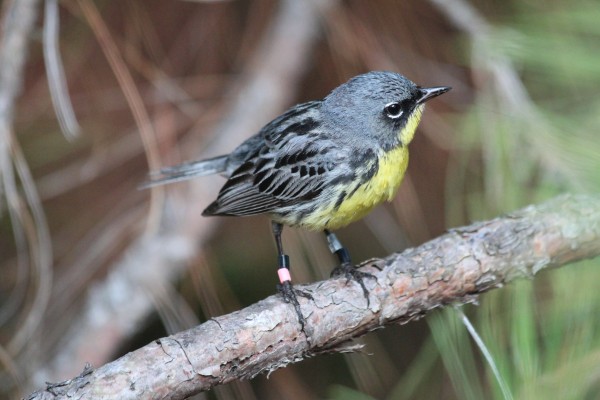 Ashley Hannah, a University of Wisconsin–Madison graduate research assistant in the SILVIS Lab in Forest and Wildlife Ecology, has been studying Kirtland’s warblers since 2014. She wants to know what it is about these spaces in Wisconsin that are fostering the rare bird’s successful relocation.

Each male Kirtland’s warbler has a distinctive song, which Hannah uses to track the elusive birds.

“The males sing very loudly from the tops of pine trees,” Hannah says. “We would also try to locate females but they don’t sing and are very secretive.”

In 2016 Hannah began monitoring the birds by following the musical males to their nests and identifying individuals by their unique leg band combinations. She also tagged chicks in those nests with leg bands and radio tagged some individuals to investigate their movements after leaving the nest.

She also spent time at the Smithsonian Migratory Bird Center, studying Kirtland’s warblers habitat use patterns in their wintering grounds in the Bahamas.

“When I was assisting with that project we actually found a bird that had been banded as a nestling in Wisconsin the previous summer,” Hannah says. “So it was really exciting to see one of the chicks I had watched as a nest monitor on the wintering grounds.”

Through thousands of hours of camera footage recorded at nesting sites back in Wisconsin, Hannah wants to find out how predation plays into parental activity at the nests. That work is ongoing.

Understanding more about the songbird fledgling period, Hannah says, will be critical for deciphering how populations of the Kirtland’s warblers change.

The older they get, the farther they travel from their nests. In general, warbler fledglings prefer areas with denser, higher foliage and more tree cover, likely to reduce predation, Hannah says. But their nesting period is still the most vulnerable time for the birds.

The Kirtland’s warblers have historically resided in the northern jack pine forests of lower Michigan. By 1971, their population had shrunk from around 1000 birds down to about 400. Their decrease in numbers was partially due to habitat loss caused by human development, road construction and deforestation. But warblers were also preyed upon by the bizarre parasitism of the the brown-headed cowbird.

Cowbirds evolved as nomadic birds, eating the insects that followed herds of ungulates, like bison, across the plains of North America. Because they had to follow the herds for food, they could not stay in one place. 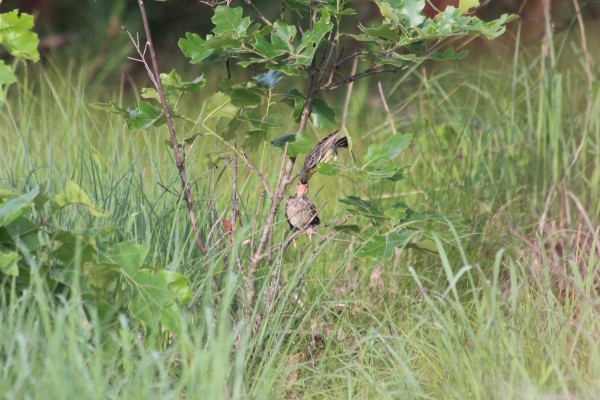 So the cowbirds would lay their eggs in other birds’ nests. They intimidate the host mothers into raising the cowbird chicks, at the risk of the deaths of their own chicks. If a cowbird chick is in the nest, it is rare for any of the Kirtland’s warblers’ chicks to survive.

Cowbirds still affect some central Wisconsin warbler nests every year, Hannah says. But there are no cowbirds in the northern Wisconsin habitats where the trees are thicker and there is less agriculture providing the open spaces cowbirds prefer.

“As long as habitat is available and parasitism of nests is low, and there is little risk of inbreeding depression or other… events wiping out the entire (Kirtland’s warbler) population,” Hannah says, then the populations will be self–sustaining.

“However, without enough available habitat and cowbird trapping, the population will not be sustainable,” Hannah says. “Kirtland’s warblers will always be conservation reliant.” 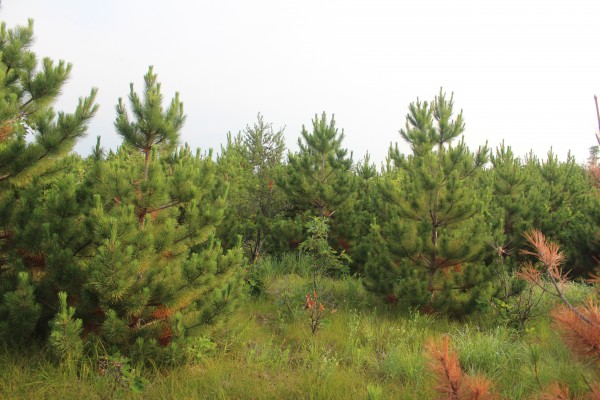 Kirtland’s warblers have very specific tastes in real estate and only roost in dense jack pine stands that are about five to 20 years old. which Since jack pines only regrow following a wildfire, wildfire suppression reduces viable habitat for Kirtland’s warblers.

But the warblers have curiously branched out from this strict habitat into the red-pine dominated landscapes around Wisconsin. Hannah hypothesizes that the tree stands occupied by Kirtland’s warblers in Wisconsin are similar enough to Michigan’s warbler-inhabited stands in terms of density and ratio of red pine to jack pine to support Kirtland’s warbler populations.

Warblers also prefer stands that have vegetation closer to the ground, shorter shrubs, and contain taller trees with low level live branches. They also choose environments that have sandy soils. A ground nesting-species, Kirtland’s warblers rely on the sandy soil around the pines to act as a drainage system so that their nests do not become soggy.

Her research, Hannah hopes, will be useful to managers who oversee the land on which the warblers have decided to settle.

“Without human intervention — habitat creation, maintenance, and cowbird trapping — the population will start to decline because the historical conditions that the species thrived in are no longer possible,” Hannah says.