“Jacquelyn Gill is a talented young paleoecologist at the University of Maine — achieving lead-author status as a graduate student back in 2009 on a much-cited paper in Science that shed light on what did, and didn’t, contribute to the great die-off of mammoths and other ‘megafauna’ in North America as the last ice age ended,” a recent article in the New York Times begins.

Gill published that much-cited, illuminating paper while she was a graduate student here at UW-Madison, under the guidance of Jack Williams, a professor of geography and director of the Nelson Institute Center for Climatic Research. She is now a promising force in her field and has excelled as a science communicator.

Mastodons graze on black ash trees in a pleistocene swamp. A study by Jacquelyn Gill, Jack Williams and other researchers at the University of Wisconsin—Madison shows that the disappearance of North America’s large herbivores not long after the retreat of the ice sheets that covered much of the continent triggered a dramatic reshaping of the landscape. Illustration by Barry Roal Carlsen, UW-Madison

Hosted by Holthaus and co-hosted by Gill and Andy Revkin of the NYT Dot Earth blog (who wrote the NYT article cited above), the three describe it as a “dialogue between the climate scientists, newsmakers, journalists and the people on the front lines of climate change.” They recently produced an episode called Climate forensics: How scientists reconstruct the past to understand change today, in which Gill describes how and why she and other scientists, like Williams, study the climates of the past.

“We don’t have time machines yet so I can’t go look at mammoths or glaciers at the end of the Ice Age,” she explains in the episode. “So that means that what we end up doing is something I call climate forensics. Instead of a crime scene the work in my lab involves reconstructing a past ecosystem.”

Using cores of ice from unspoiled locales, pollen grains embedded in ancient lake sediments or the secrets locked in ancient coral, Gill and other scientists look for clues that indicate what past climates were like, and then use these clues, or proxies, to understand the flora and fauna that thrived or failed under particular climatic conditions.

For example, as Revkin explains in the article cited above, in Gill’s widely referenced paper she and her research team relied on fossil pollen, charcoal and the spores of fungus found in large herbivore dung to piece together the extinction of Ice Age mammoths, mastodons and other megafauna in North America and assess the impact these extinctions had on the landscape. The dung fungus has proved to be a particularly powerful proxy.

The fungus sporulates only after passing through the digestive tract of a large herbivore like a mammoth, where it completes its life cycle. These spores then make their way into lakes and settle into the mud at bottom. After centuries, these layers are covered by more recent layers of sediment, becoming pressed and stacked like layers of rock, preserving the muddy bottoms of the past on a physical timeline. Scientists can look to see what’s in these layers to understand what conditions were like at the time.

When they find fungal spores, it suggests large herbivores likely roamed. When spores are absent, so too must have been the megafauna with which they are associated. Fossil pollen in these same and adjacent layers provides a proxy of the environment, since it reveals what plants were present and in what abundance.

“I approached my PhD wanting to figure out what the ecological consequences were of the loss of these big animals because we know big animals today and their extinctions have major impacts on ecosystems,” says Gill in Warm Regards. “It’s like, if a mammoth dies in the forest, does anyone care? And in this case, the proxy I ended up working with is a fungus that grows on animal dung. We have a lot of animals who have a lot of poop and when you have a lot of poop, that’s a lot of habitat for this fungus and the fungus produces lots of spores and they fall into the lake right along with the pollen so you’re able to count pollen grains and spores right in the same sample.”

“This is an apples to apples comparison that tells you exactly when large Ice Age herbivores like mammoths and giant ground sloths went extinct and what happened in the environment immediately afterward, within decades,” she adds. “You can tie that back to what the climate’s doing and drill down and see if the loss of these animals was related to a change in the climate or to some other factor on the landscape, like people.”

Recently, Williams and another UW–Madison graduate student, Yue Wang, took part in a study of the extinction of a population of mammoths on a remote Alaskan island that outlasted their mainland counterparts by thousands of years. Dung fungus proved critical to that study as well, reinforcing how important this proxy is to paleoecologists. Gill and Williams were among the first scientists to show a reliable correlation between these spores and the extinction of megafauna like mammoths. 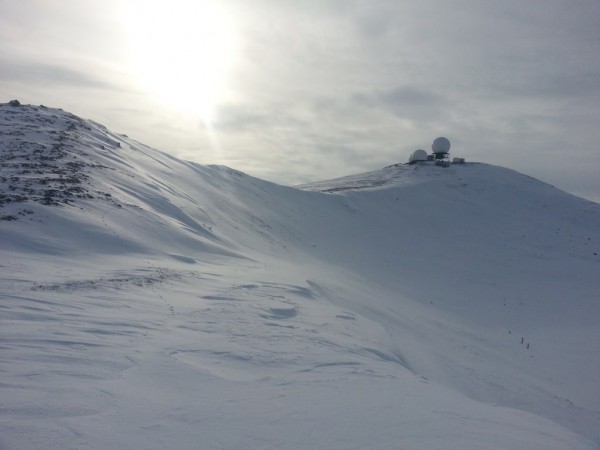 Remote St. Paul Island off the coast of Alaska was once part of the Bering Strait. Here, a population of mammoths outlived their mainland counterparts by several thousand years. Today, the island is home to a small Aleutian fishing village; seals, arctic foxes and caribou; and, as seen here, a weather station. Photo courtesy of Jack Williams and Yue Wang

But these kinds of studies don’t just provide windows into the past, they allow scientists to better predict how conditions today could impact our future.

“The work that ecologists are doing today combined with the work that paleoecologists and paleoclimatologists do (with) the past combines to provide really important context,” says Gill in the podcast. “Overall, I think what the paleo record can do is contextualize what’s happening now by giving us a sense of the range of responses: What kinds of species are more extinction prone and why? What kinds of species experience big population booms and busts when we have big changes in climate and what specifically are they responding to?”

“I like to think of the paleorecord as letting us know when we need to be worried or when we can back off and let nature do its thing,” Gill adds. “But the difference between … 8,000 years ago and today is there are a whole lot of people living here today with very complex systems that aren’t terribly flexible, like the City of Boston, the City of New York, Portland … The important thing is that studying the past gives us some sense of what’s coming, but what it can’t do is tell us how human societies are going to respond. That’s going to take working with all different kinds of scientists.”

And for that, Gill is well prepared.