Home » Animals » Most of the world does not refrigerate their eggs. So why does the US? 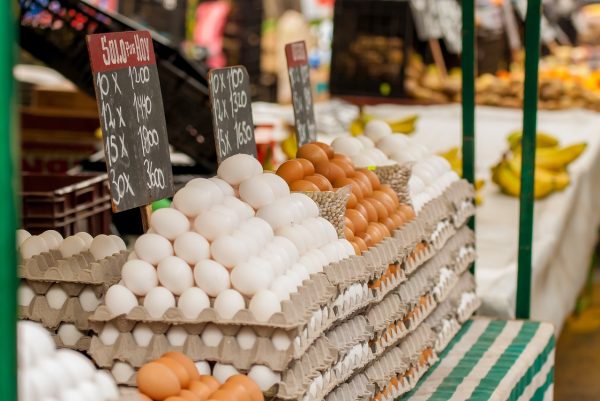 Egg sellers throughout the world display their eggs in open-air markets like this one. Photo by Creative Commons.

If you’ve ever travelled abroad and visited a food market, you might’ve found a peculiar sight: open stands with shelves of unrefrigerated, unwashed eggs on display. In the U.S., this would be unthinkable. So why do we take such care to wash our eggs, transport them in temperature-controlled trucks, and then display them in the refrigerated section of the supermarket?

According to University of Wisconsin–Madison faculty associate and poultry specialist Ron Kean, we require that our eggs be washed because of bacteria that may live on the shell of the egg.

“There are two benefits of washing eggs: one, it gets rid of any surface contaminates, and two, it provides a cleaner, nicer looking egg,” Kean says.

So then why chill the eggs? It turns out, washing an egg removes a protective barrier called the cuticle. Removing this cuticle makes the egg more porous, which reduces its shelf life and lets bacteria enter the egg.

Refrigerating eggs, Kean says, is a necessary step in protecting the egg after it’s been sanitized: “chilling prevents diseases like salmonella from multiplying and it maintains the quality of the egg.” 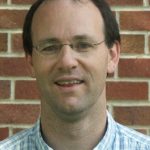 The many countries that do not refrigerate their eggs are able to do so because they maintain the cuticle. Some U.S. processors coat their eggs in mineral oil after washing them, which greatly extends the shelf life of washed eggs, and this coating in combination with refrigeration can extend the freshness of eggs by at least a month.

He explains that as eggs get older, their albumen (the egg white) becomes thinner and runnier, which is why older eggs will run clear across a pan when cracked open. And the yolk of fresh eggs sits taller and doesn’t break as easily. But the yolk also generally degrades at warmer temperatures whether the cuticle has been washed off or not.

Since the U.S. requires all processors to wash their eggs, should you wash your own eggs if you own chickens? Interestingly, the United States Department of Agriculture says ‘no’. The USDA reasons that only by using large-scale manufacturing equipment can eggs be properly sanitized without exposing them to other bacteria.

Egg processors have mastered the process of washing eggs at precisely the right temperature to kill salmonella without cooking the egg, as well as transporting and storing them without exposing them to pathogens. Consumers are advised against washing their own chickens’ eggs as this may inadvertently force water and bacteria into the pores once the cuticle is removed.

Additionally, once eggs are refrigerated, they must stay that way until they are consumed. This is because a chilled egg left out at room temperature will begin to sweat, which may facilitate the movement of bacteria on the shell into the pores.

While washing eggs is a key step in preventing salmonella from occurring on the outside of the egg, the bacteria can still be found within the egg. 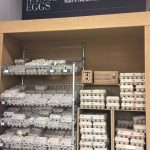 “[Salmonella] can pass from the cloaca (the rear opening of the hen), up the oviduct, and then to the ovary,” Kean says.

An ovary infected with salmonella can produce eggs that contain the bacteria within the yolk. That’s why the USDA advises that all eggs be cooked until the yolks are firm, and dishes containing eggs should be cooked until they reach an internal temperature of 160 degrees Fahrenheit. Kean also mentioned that if everyone cooked their eggs completely, they’d “destroy the salmonella and we wouldn’t have an issue.” Thankfully, salmonella-related outbreaks have been increasingly rare in eggs, largely in part due to the USDA’s rigorous requirements.

In addition to washing eggs, egg producers are also required to vaccinate their hens and prevent them from encountering other animals which may harbor salmonella, like rats. This combination has resulted in an incredibly low infection rate. Only 1-in-every-20,000 eggs contain salmonella these days.

Kean wagers that some countries prevent producers from washing eggs to encourage them to produce a higher quality, cleaner egg from the start. Technically, both methods of storing eggs are safe if the eggs are cooked thoroughly, but U.S. producers are required to take special precautions to keep all possible infections from eggs at a minimum.