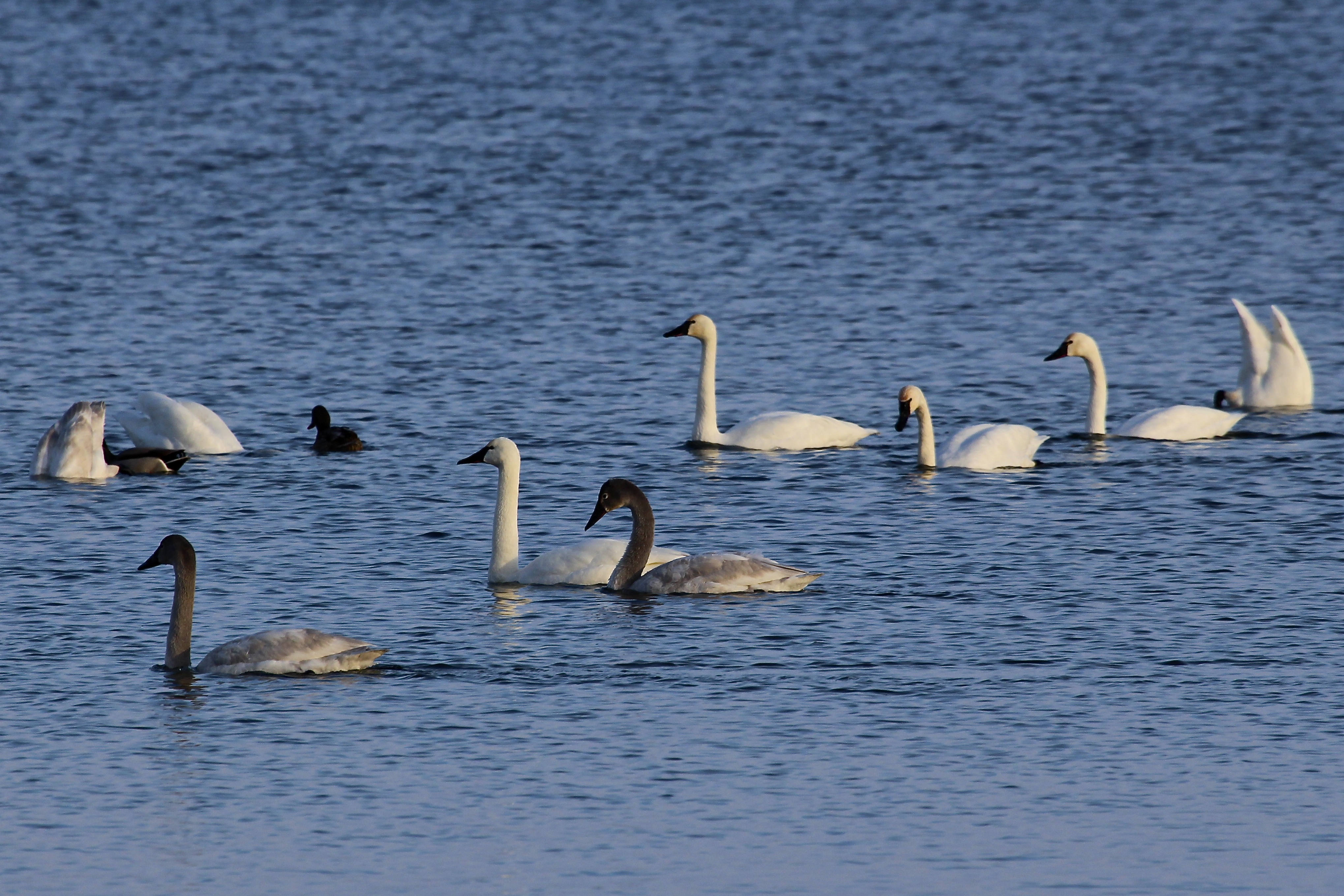 Home » Animals » The return of the tundra swan 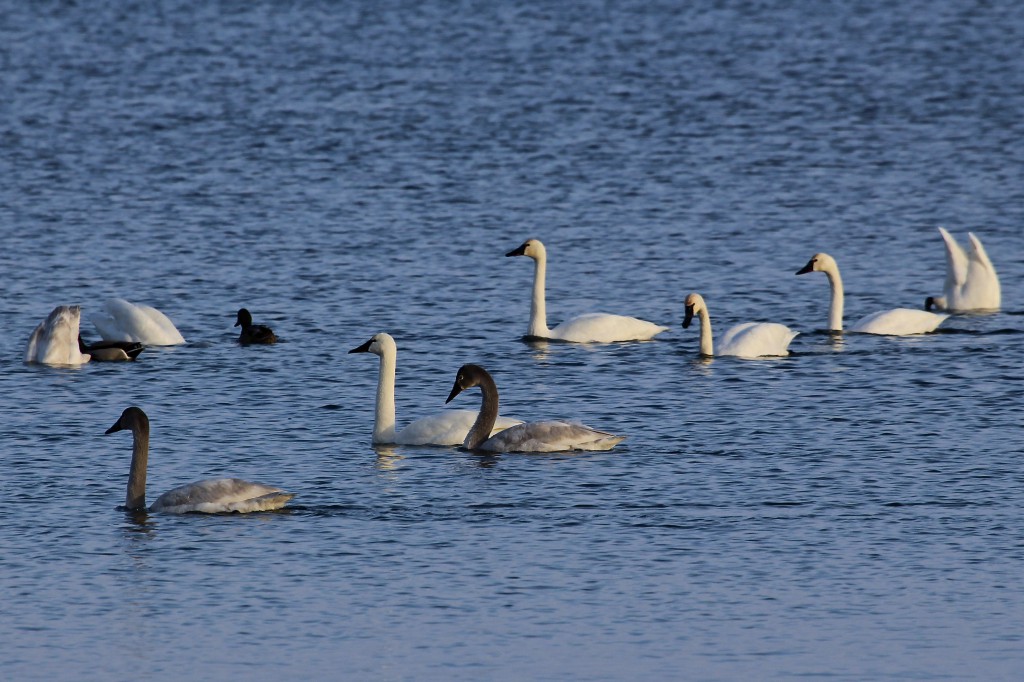 Two weeks ago, back when it still felt like real winter, I was out for a run along the Lakeshore Path. There was a noticeable film of thin ice creeping from shore and plates of frozen water clanging together in the rolling chop.

But that sound was soon drowned out by another: the chattering, chirping and honking of large and majestic white birds, flocking together and mingling with the more common ducks and geese.

The birds are tundra swan, and they’ve stopped over in Madison on their annual migration from the arctic. There seem to be fewer hanging around these days, but look out on the lakes and you may still see a small group sticking together. They’re likely to be back in the Spring. For now, we checked in with Matt Hayes, a large bird expert and PhD student under Mark Berres in the Department of Animal Sciences, to learn more about these beautiful, social animals:

Where are they coming from?

MH – I expect the populations that we see here, either during migration or during the winter, they’re breeding in far up north Canada. So they’re in the Northwest territories, the Yukon, in the islands up there. They nest up there on the tundra.

The birds here have a really unique migration pattern because they will come down along the Great Lakes and they’ll skim along the bottom part of the Great Lakes. The populations seem to kind of split and I don’t know that anybody really understands it. Part of the population heads east toward the Chesapeake Bay area, to the east coast, and then the other populations head down to the Southern Atlantic coast, the Gulf of Mexico.

Will they stop back here on their way back to the Yukon?

MH – I expect they probably would. We do get a lot of tundra swans here in the spring as well. I don’t know of anyone out banding, marking those, but I can’t attest to that for sure. Several bird species have this elliptical pattern; they take one pattern south and then they bend back when they head back north.

Why are they stopping here on their migration?

MH – Any kind of open bodies of water, we have the five lakes here – Mendota, Monona, Wingra, Kegonsa and Waubesa. Goose Pond, which is up near Deforest, is a great spot for tundra swan, especially in spring. They like the shallower bodies of water, they can dig around, forage, still find food. So anything that allows them to be on the water where they feel safe but still be able to find food is going to be good habitat for them.

Do you know what they eat?

MH – A lot of different things. They’re vegetarians as far as I understand, for the most part (they also eat some mollusks and arthropods), so they’re going after any kind of leftover vegetation material. But a lot of times during migration they’ll go after a lot of the tubers and the storage starch materials underneath the soil.

Do you know typically how long they’ll stick around?

MH – I’d say it’s probably weather dependent. I’d say as long as it’s ice free, they’re going to be hanging around here. The larger bodies of water where the swans hang out are ice-free so they’re probably going to hang on as long as they can find food and keep foraging. If we have a mild winter they’ll only go as far south as they have to.

One of the things that struck me was the sound. It was so loud. They were chattering and chirping and honking, all the sounds you usually associate with a large bird like that. Is there a particular name for what they’re doing, do they have different calls depending on different circumstances?

MH – They’re definitely communicating with each other. Historically, they used to be called whistling swans, they have a higher pitch to their voice. The communication has got to mean something but I expect part of it’s communicating in terms of: ‘Hey do I see a predator?’ or ‘Hey, you’re in my space, I’m feeding here.’ It’s probably a combination of looking out for each other versus interacting and trying to feed.

MH –  Yeah, during this time of year they’re flocking together. Part of that’s to feel safe, and part of that is learning different things from each other. Swans are one of those long-lived species that have a really long time period before they are considered an adult, so they’re probably still learning things from each other. It’s a combination of safety in numbers as well as learning different things.

What are some of the best ways to enjoy them while they’re here?

MH – Binoculars, a spotting scope, get out while you can and enjoy them while you can, just be able to check them out. Observe the behaviors, pick up what’s out there, see what you can find. 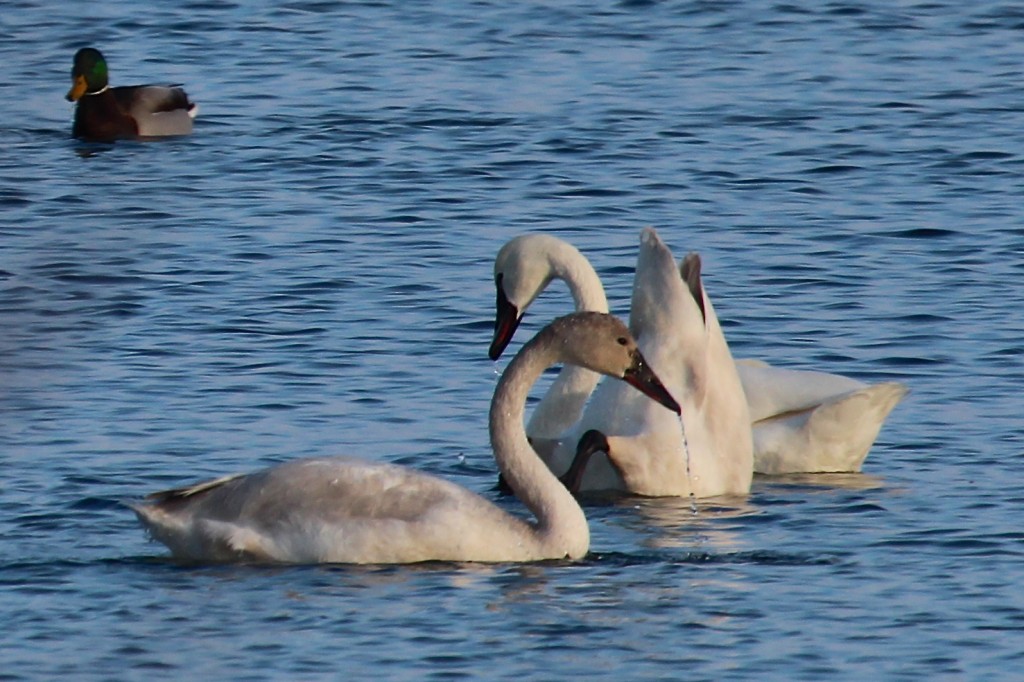 One thought on “The return of the tundra swan”