WARF has assisted generations of UW–Madison inventors patent their discoveries and advance them to the marketplace. Artistry of Innovation showcases nearly nine decades of genius from WARF’s patent collection, presenting a breathtaking array of disciplines, from Cold War engineering to the stem cell revolution and bacterial communication.

The opening reception is Friday, Sept. 30 from 5-7 p.m. in the Union South art gallery on the University of Wisconsin-Madison campus. The reception is free and open to the public. The exhibit closes Nov. 14. 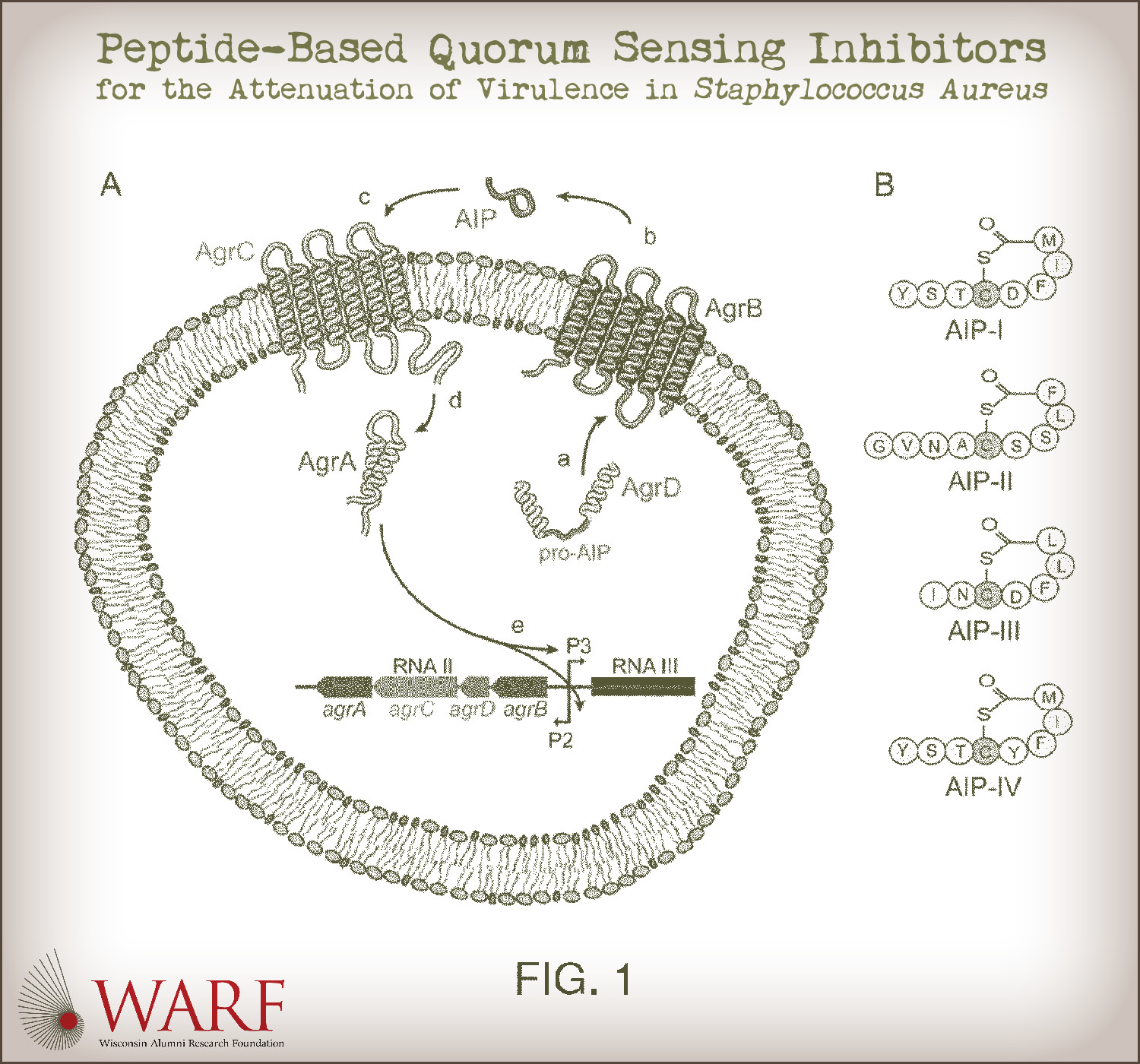 Peptide-Based Quorum Sensing Inhibitors for the Attenuation of Virulence in Staphylococcus Aureus, 2016: U.S. Patent 9,227,996 “Quorum sensing” is a chemical signaling process that many types of bacteria use to "count" themselves and work as a group. UW-Madison researchers are targeting this process as a new strategy against bacteria, including those that cause dangerous Staph infections. This figure shows the quorum sensing circuit of Staphylococcus aureus. Inventors: Helen Blackwell, Yftah Tal-Gan, Danielle Stacy 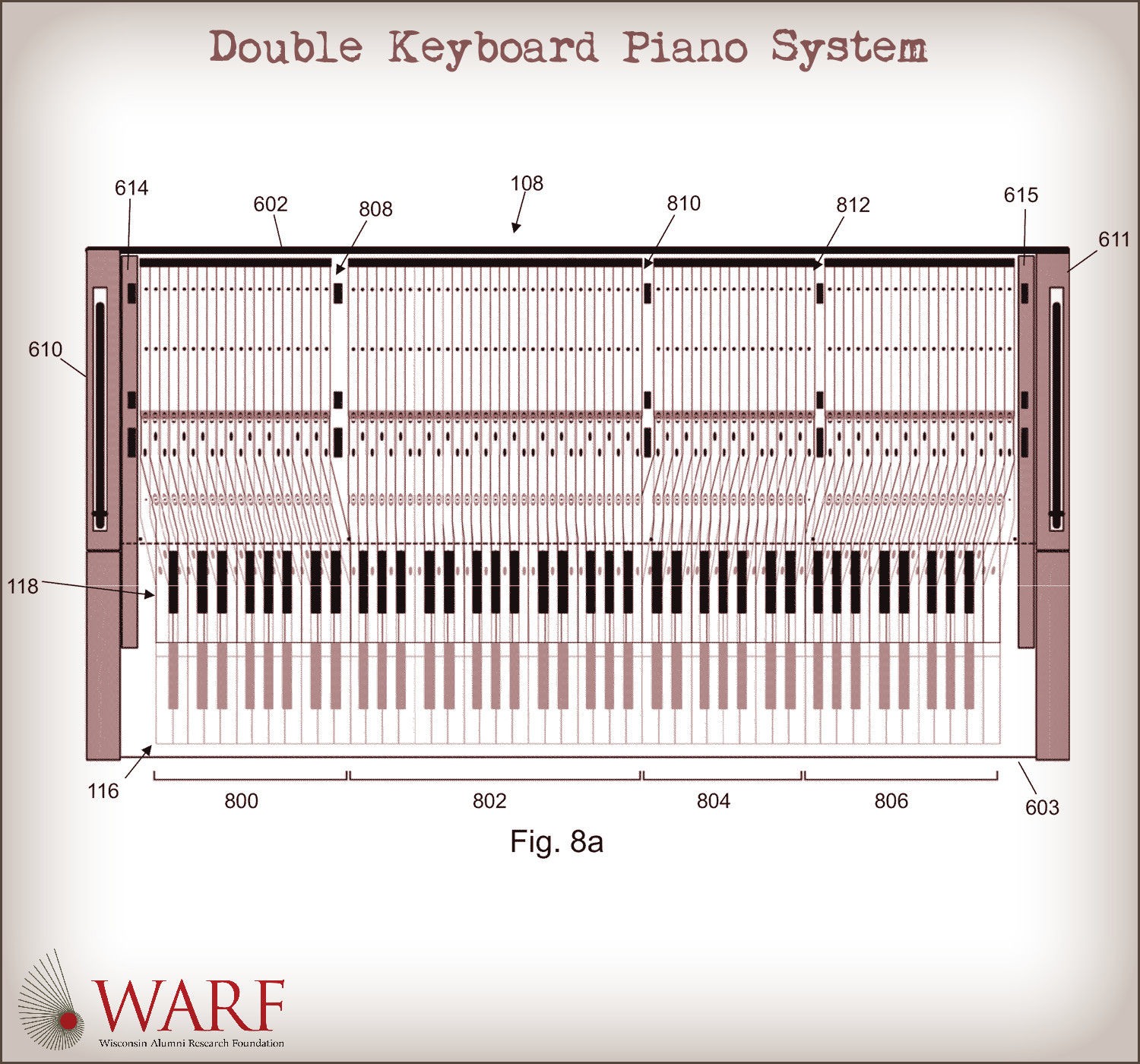 Double Keyboard Piano System, 2014: U.S. Patent 8,664,497 The duplex piano uses a piano's normal means of tone production, controlled by a pair of keyboards. Several piano makers have built these curious devices, but they are bulky and hard to play. Christopher Taylor, a renowned pianist in the School of Music, modified the design to create a modern piano capable of producing richer sounds and more diverse chords that is now ready for the stage. (Watch Taylor play the only Steinway double piano.) Inventor: Christopher Taylor 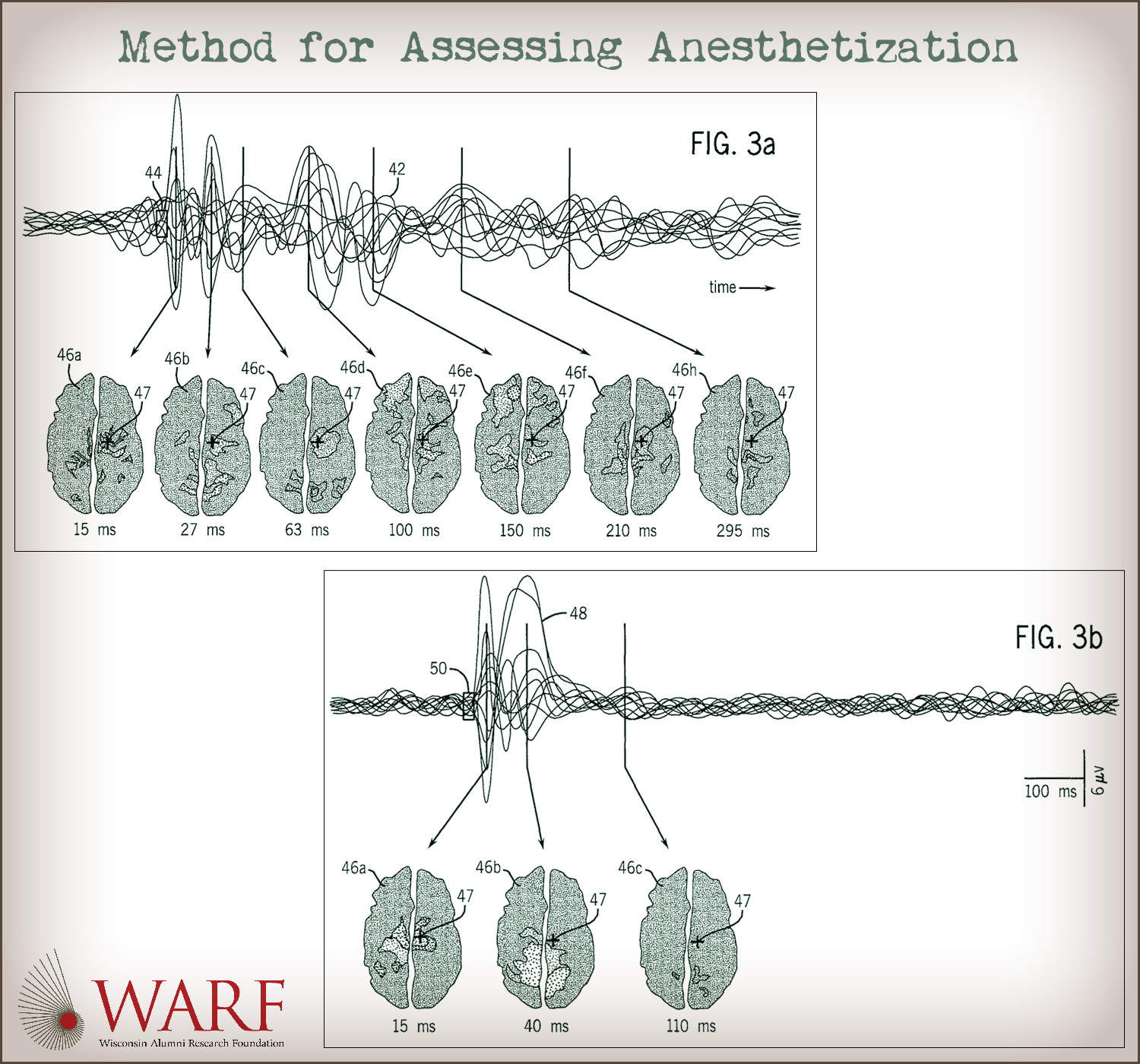 Method for Assessing Anesthetization, 2013: U.S. Patent 8,457,731 Anesthetics are critical to modern surgery, but during one operation in one or two thousand, a patient may temporarily regain consciousness or even remain awake. To avoid this nightmarish scenario, a UW-Madison sleep and memory expert has developed a method to collect and analyze electrical signals from the brain. Fig 3a: A brain while awake; Fig. 3b: A brain under anesthesia. Inventor: Giulio Tononi 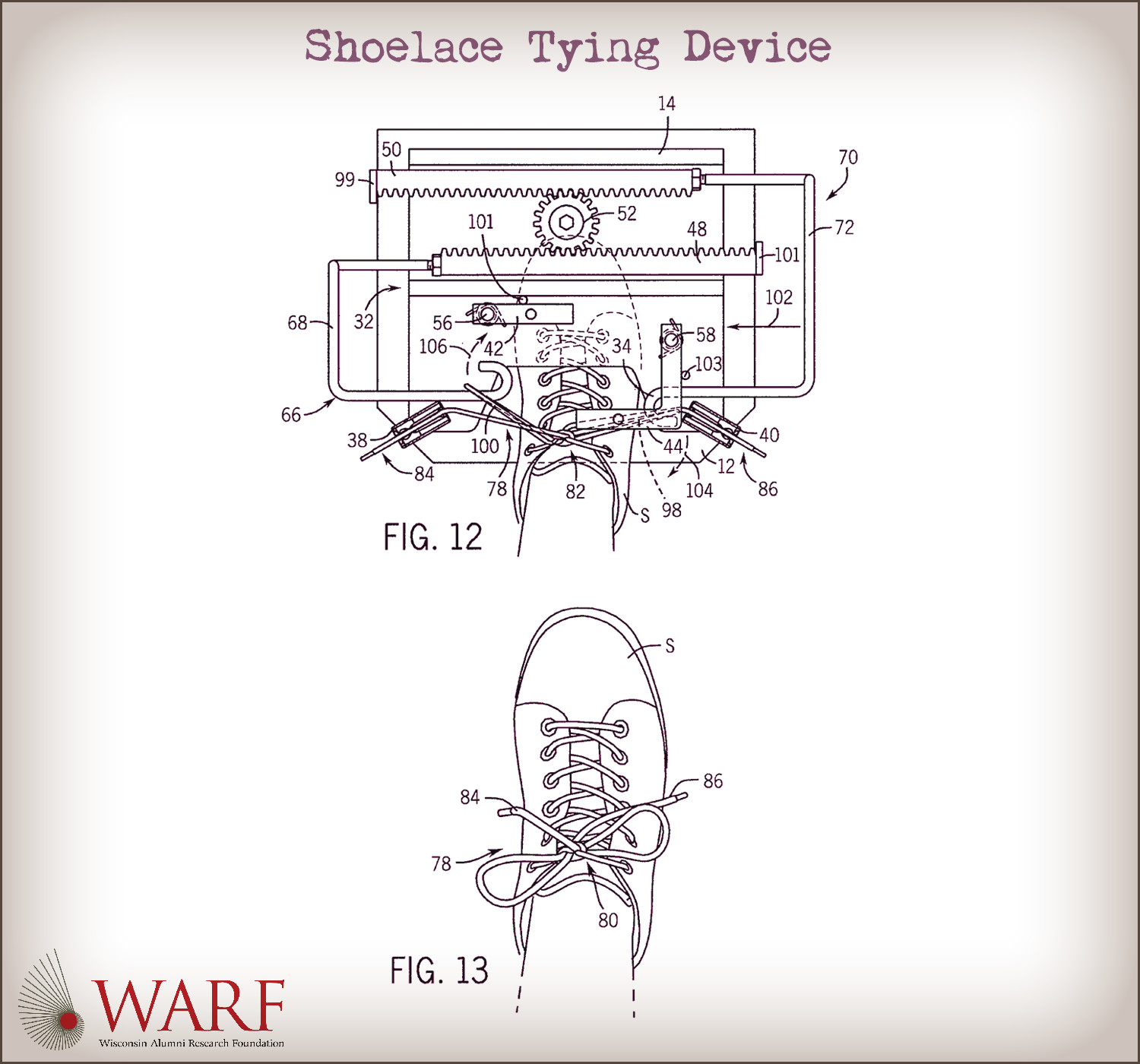 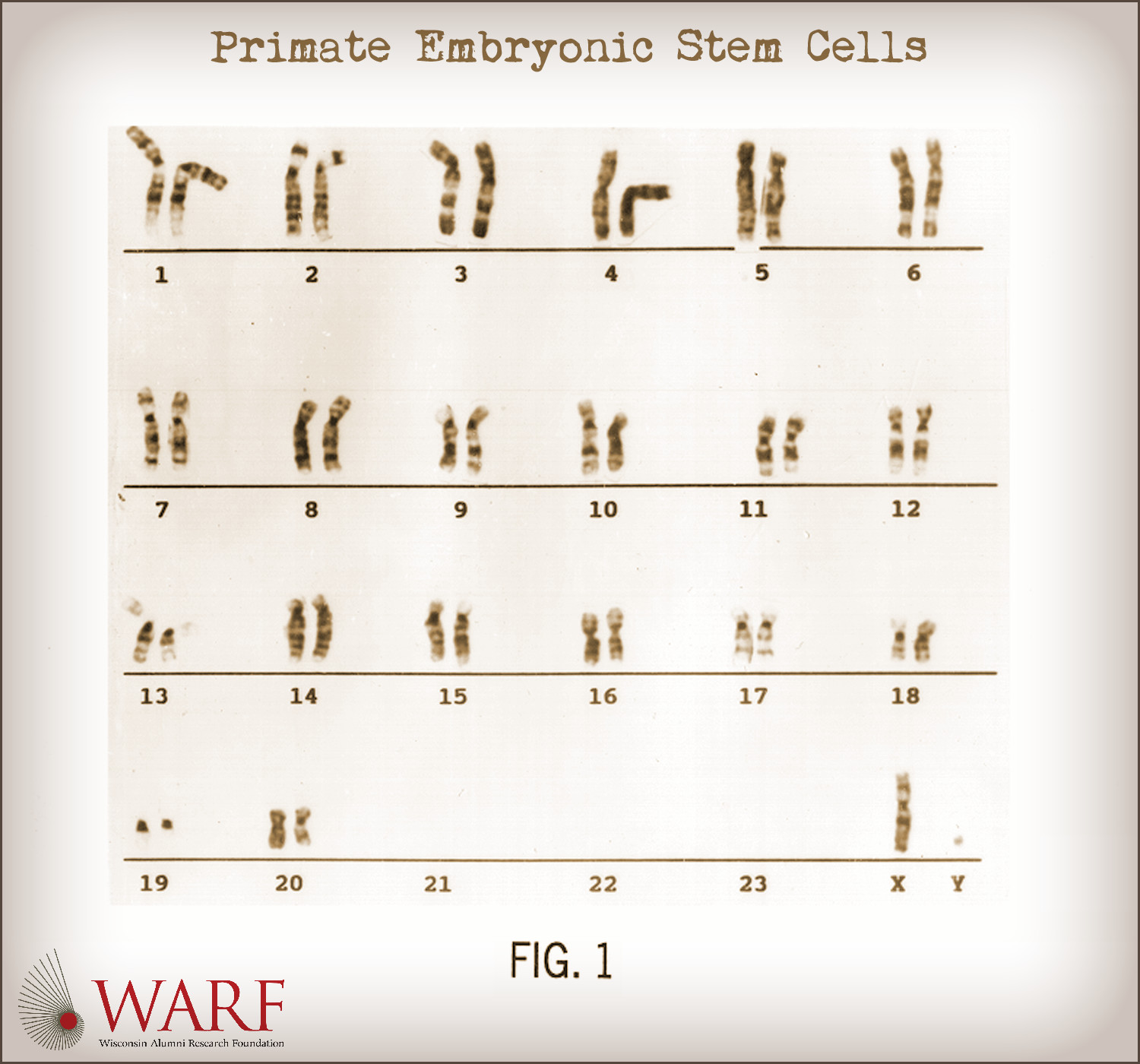 Primate Embryonic Stem Cells, 2006: U.S. Patent 7,029,913 In the 1990s, James Thomson led the first team to isolate and culture embryonic stem cells from non-human primates. In 1998, he repeated that with human embryonic stem cells – a feat celebrated as the "Discovery of the Century." His trailblazing research continues to open new frontiers in basic science and applied health. This photomicrograph shows the chromosomes of a rhesus embryonic stem cell line after 11 months of continuous culture. Inventor: James A. Thomson 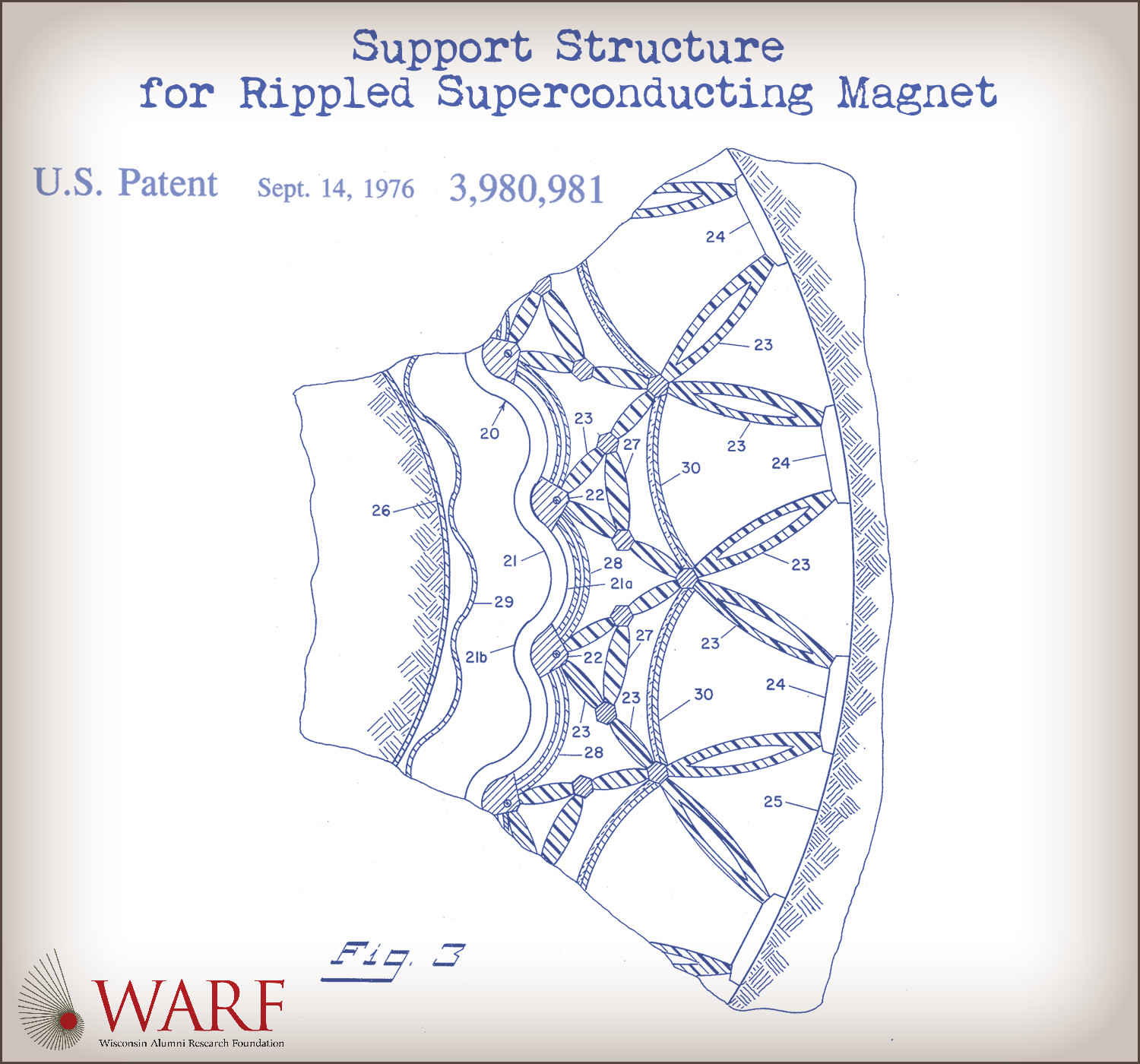 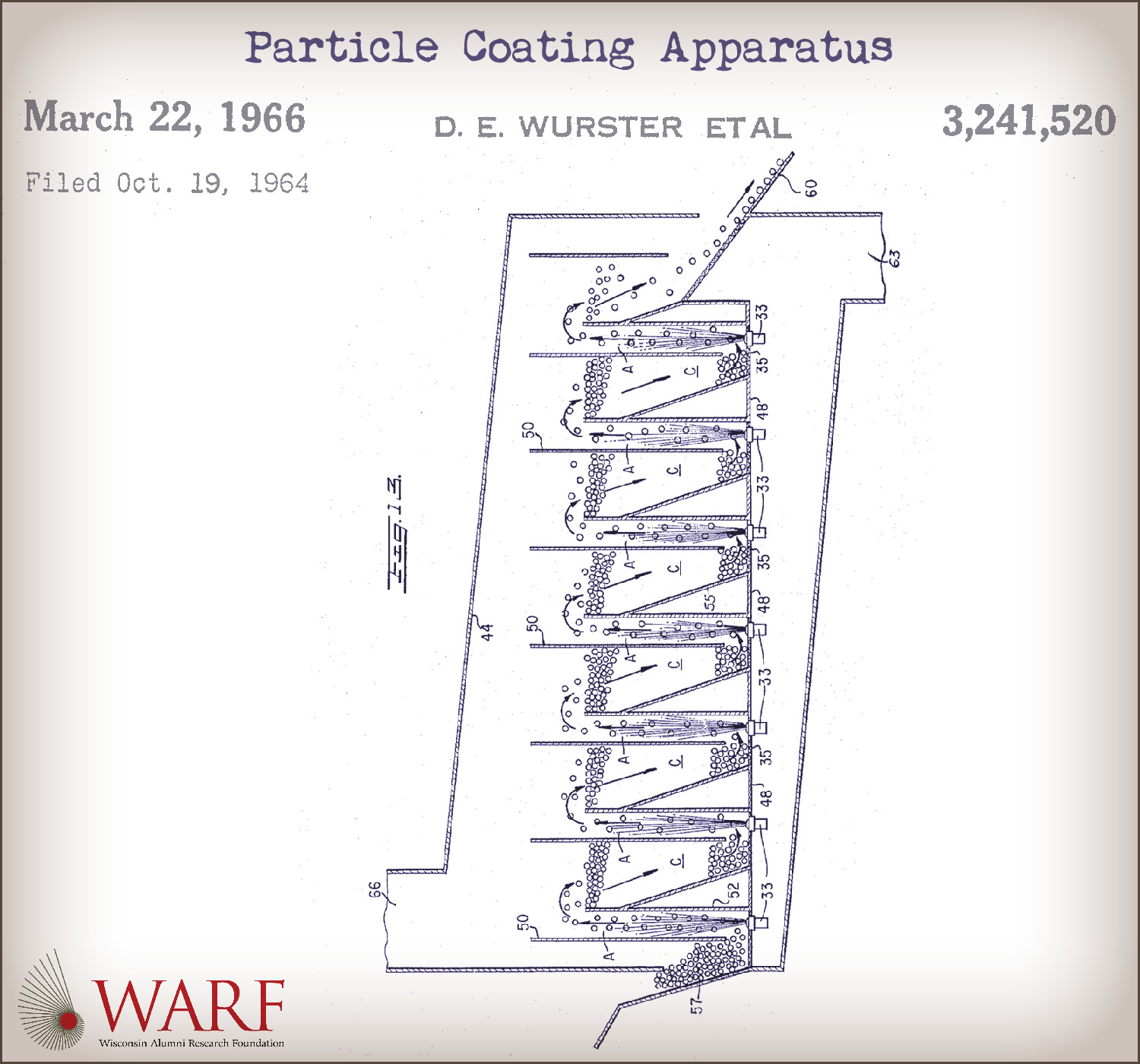 Particle Coating Apparatus, 1966: U.S. Patent 3,241,520 One of WARF’s landmark patents is a pharmaceutical particle coating technique developed and refined by Dale E. Wurster in the 1950s and 60s. This process is still used by industry to mask the unpleasant taste of drugs and control the rate of release in the body. This figure shows a vertical cross-section view of a coating apparatus. Inventors: Dale E. Wurster, James A. Lindlof