I sat down with Iwai and Burkard recently to discuss their collaboration, where I was inspired to learn that my preconceived notion of science and art as entirely separate fields could not be further from the truth. Below is a condensed and edited transcript of our meeting.

And if you’re interested, you can read more about the exhibit here. The Watrous Gallery will host an opening reception, at which Iwai and Burkard will speak, on Friday, December 2 from 5:30-7:30pm. The Gallery is located on the third floor of the Overture Center, 201 State Street in Madison.

On how they began working together

Sarah Perdue [SP]: Tell me how this project began, and how you started working with each other.

Leslie Iwai [LI]: I moved here in 2011 and have created several art installations and artwork since 2001. A friend who is a rheumatologist here, Christie Bartels, started coming to some of my exhibits. I created a show called Interstitial Garden, with layered three-dimensional, translucent works, and she said, “That reminds me of the body, have you ever looked at the interstitial space of the body?” And I hadn’t thought of it but some of the things she said resonated with things in my show. So she introduced me to Mark and his work, seeing the potential connections that could be created. I have a background in chemistry and math and I like reading science text, but the weird thing is, when [Mark] had first coined the term klerokinesis, it stuck out to me. I am a word nerd. It meant “allotted inheritance.”

[Klerokinesis is a type of cell division that Burkard and his research group discovered in human cells. To learn more about the process and how Burkard discovered it, check out this news story.]

Mark Burkard [MB]: Which was nice because the scientist who reviewed the paper hated that word. He made me take it out because many years before someone had discovered a similar process in slime molds and they called it cytofission and they said it was not illuminating to provide two names. So now we have two names and both are going to be featured in the show.

LI: I think it’s illuminating. They both have to be featured. And I thought it was really neat that [Mark] brought in someone to talk to about a word.

[That someone is UW classics professor William Brockliss.]

MB: So what happened is [several years ago when we were doing the research] we had the chair of radiation oncology from Memorial Sloan Kettering visiting here. I told him what we were seeing. He asked, “What do you call this?” I said, “Abnormal division of cells.” And he said, “No, you gotta come up with something better.” I talked to my colleagues, cytokinesis, that’s Greek isn’t it? I looked up the Classics department, Brockliss is a Greek scholar so I emailed him, asked if he’d have a cup of coffee and discuss it with me.

LI: When I read that, I thought, this is right up my alley. Words are deep, and then you reach into the body and into the cell and smaller, smaller, smaller, and these stories are still being told. I did an honors thesis in fractals and I like the idea that the complexity does not reduce as you get smaller. I figure our stories are just that complex as you go deeper in the body.

MB: I didn’t know you studied fractals. That makes so much sense now. You have patterns at the macro level that you have reflected at smaller and smaller levels, kinda like what you’re doing here.

MB: The way the discovery happened was, we were trying to take normal cells and turn them into cancer. And the normal cells, the way that a lot of people said you do that is you block the division process, and they turn bad. We were trying to do that. We’d put in a chemical at a very specific time that would block cytokinesis and then we’d take those cells and say, ok now we’re going to get a lot of cancer cells. But we couldn’t get any out! We finally looked really closely and what we found was they were recovering from that, by this really unusual division process that we call klerokinesis or cytofission. It would take a long time for this to occur and it was very unusual.

SP: How did Mark’s research in cytofission inspire your pieces, Leslie?

LI: I was definitely inspired by images, they were huge to me. And inspired by our discussions. I’d take notes and draw diagrams and ask questions.

MB: [At the gallery] there’s going to be a scientific image and a story, and behind that will be all of Leslie’s interpretation and images in 3-D. One of the themes of the pieces that she’s made is this idea of slowly coming apart. A connection and coming apart. And then you have the two young girls. She has this beautiful photograph of these two young girls who are connected by their hair. But again, that’s another way of showing on the macroscopic scale that people are connected.

LI: I love that photo series. The girls are my friend’s daughters and we did this photo shoot for over seven hours. I thought it was interesting because the idea of daughter cells was something I brought to Mark. I brought these sewn-together lace doily things. I thought, why are they called daughter cells? There’s something so beautiful, so domestic. I liked how you responded to that, the delicacy of that piece. And I thought these girls are at the cusp of becoming women. That they’re not women yet but they’re still daughters.

[Daughter cells are the two cells that result after one cell divides.]

MB: I think you wrote that the initial inspiration or idea was different than what you had later.

LI: Totally. I think my first understanding was, cancer, oh bad, gotta get out of this, there’s a distress situation. And the more I looked into it, the more I thought about it, it went from being about leaving or escaping to this idea that the cell is taking its time.

MB: The first theme was escape, an escape hatch, I’m going to recover from this bad situation. And the end was more how slow this process was and the discrepancy in the division. And then it was, as you said, a long goodbye and finding your own space independently and surviving independently with your own piece of what you needed, for good and bad. What was the middle theme?

LI: I’d say the middle was this slowness. The first thought was quickness and it has a lot of fear in it, there was some fear in how I was looking at and thinking about the process.  And then when those images of the girls came to me, I thought this was personal. The personal stories of people leaving or surviving or going and I thought, there’s a sadness but then there’s something good. But it takes time. I was talking to Mark, I think at our last meeting I said, I’m not totally focused on cancer, I’m focused on this process. And he said, Leslie half of my work is cellular research, just understanding cells. And I thought that’s important. Looking at the cancer but looking at this story that’s bringing something out from cancer. 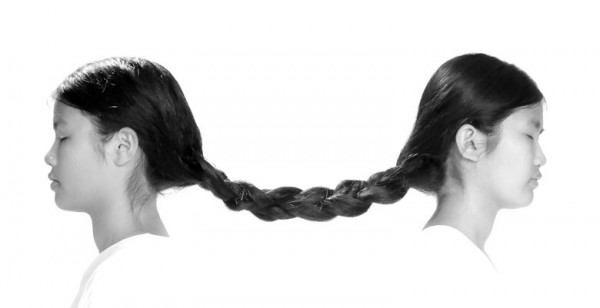 Art and science aren’t so different after all

SP: I’m struck by the fact that the artistic process is similar to the research process. You have a question, you find a way to ask it, and then you get data that directs your research often in an entirely different way than when you started.

LI: I feel like I’m in a little lab myself. Yes, we’re taking about different things. But it’s still touching the human spirit and the human condition.

MB: …learn from each other.

2 thoughts on “When science becomes art”