A team of three from University Communications at UW–Madison – videographer Justin Bomberg, photographer Jeff Miller, and me, science writer Kelly April Tyrrell – have traveled 8,779 miles from Madison, Wisconsin to Johannesburg, South Africa in order help tell important UW-focused stories about origins: from the origins of life on Earth, to the origins of galaxies in the universe, and the origins of humankind. Read below for more and also join us on our South African adventure on Instagram and on Facebook. 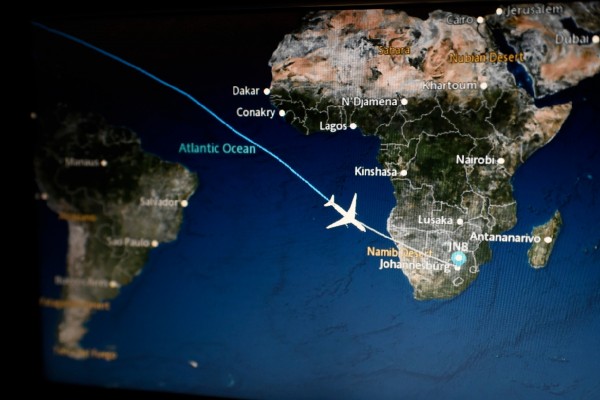 A capture of the screen on the long-distance flight from Atlanta to Johannesburg. South Africa as part of a team project on origins at the University of Wisconsin-Madison on July 11, 2017. (Photo by Jeff Miller / UW-Madison)

It was a slightly bumpy start for the team, with videographer Justin’s bag a bit too heavy and a passport name discrepancy that stymied photographer Jeff’s initial efforts to get checked in, but problems were quickly solved and we soon breezed through security at Dane County Regional Airport.

Despite a delay of 40 minutes leaving Madison on a warm and sunny summer day, the flight to our layover destination in Atlanta, Georgia was quick and uneventful. We landed just 20 minutes later than our originally scheduled time of 2:00 and with no shortage of hours to spare before our 8 pm departure. Final destination: Johannesburg, South Africa. 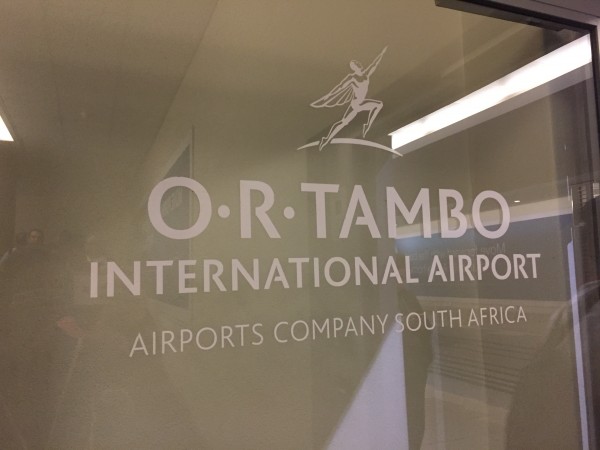 The real journey perhaps began in 2015, when a particularly talented team of tiny, female anthropologists masterfully shimmied their way into a claustrophobic chamber of the labyrinthine Rising Star cave system, in the Cradle of Humankind in Guateng (pronounced How-teng) Province, South Africa. Led by University of Witswatesrand (Wits) anthropologist Lee Berger and University of Wisconsin–Madison anthropologist John Hawks, the crew there gathered more than 1,500 bones representing 15 individuals of a never-before-described human ancestor now dubbed Homo naledi (named after the Sesotho word for star).

Today, Hawks and Berger have evidence that Homo naledi lived between 226,000 and 335,000 years ago, may have deliberately buried their dead, and represent a new species of hominin, the ancestral line shared by humans.

In the time since that find, my office – University Communications – has pondered over ways to continue to help share the story of some of our earliest known ancestors, and help illuminate the contributions UW–Madison faculty, staff and students have made to the endeavor. And so it was in March 2017 when I was asked to consider traveling to the Southern Hemisphere to find and tell a host of good stories about our work in South Africa. It is here where several important anthropological sites are clustered together in the Cradle of Humankind.

It turns out there is more than just new stories about old bones. As I type this, eight UW–Madison undergraduate students are working hard in field school at Swartkrans, across the street from Rising Star, studying the anthropologically critical site that has yielded fossils of hominins, stone tools from the Stone Age, and the earliest evidence for human controlled fire. The professor leading this field school, Travis Pickering, has studied in the Cradle of Humankind for more than two decades and is part of a collaboration with Wits anthropologist, Ron Clarke, on an endeavor to classify the most complete Australopithecus skeleton ever found, a specimen named Little Foot. 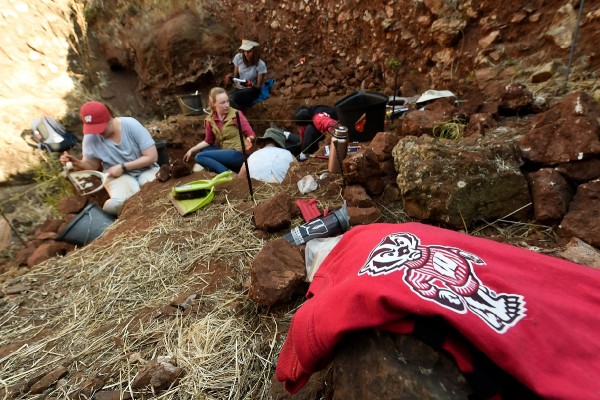 Undergraduate students work at Swartkranz at part of a field school in South Africa taught by Travis Pickering, professor of anthropology at the University of Wisconsin-Madison on July 12, 2017. (Photo by Jeff Miller / UW-Madison)

But there are also UW–Madison astronomers studying the data that is traveling millions of light years through space and funneling their way into a special instrument built by engineers and machinists at UW–Madison over a decade ago, mounted on a high plateau in Sutherland, South Africa on the Southern African Large Telescope. Here, one of the world’s largest optical telescopes peers through dark Southern Hemisphere skies to help illuminate some of the mysteries of the universe.

At the same time, UW–Madison geoscientists are looking for the earliest signs of life on Earth, in rocks once deposited in shallow seas that covered the planet, perhaps more than a billion years before microorganisms began exhaling oxygen into our atmosphere.

We’ll also explore UW–Madison’s long and enduring scientific presence in South Africa, particularly during the bitter years of apartheid, the years in which the nation was rebuilt, and today, as UW contributes to the next generation of scientists in the African nation. And, especially as it trains Wisconsin’s next generation of students, too.

4 thoughts on “Adventures in South Africa to follow ‘origins’ stories”