Home » Archaeology » From anthropology to astronomy, stories from the road in South Africa

After several days of immersing ourselves in anthropology with UW Professor Travis Pickering, his undergraduate field school students and his South African collaborators, on Sunday, July 16, Justin, Jeff and I gathered our belongings, ate a quick breakfast at our hotel in Johannesburg, and headed to O.R. Tambo International Airport for a quick, two-hour flight on South African Airways into Cape Town. 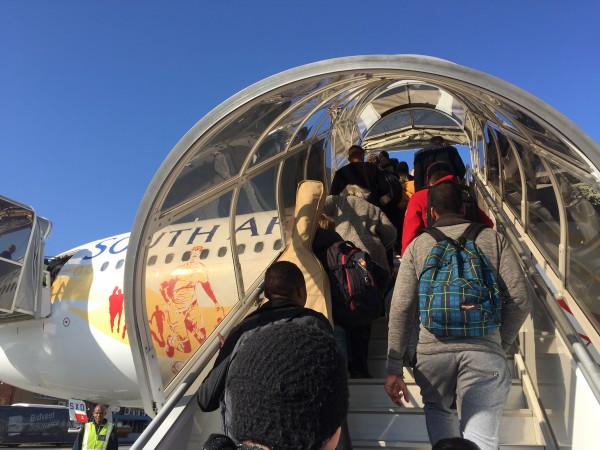 Boarding our plane in South Africa, after taking a shuttle bus across the tarmac. Photo: Kelly Tyrrell

It was an interesting experience flying domestically in another country on a local airline. We could wear our shoes and even bring liquids through security! It was a good reminder that things work differently around the world and many of the things we are accustomed to in the United States are pretty unique. 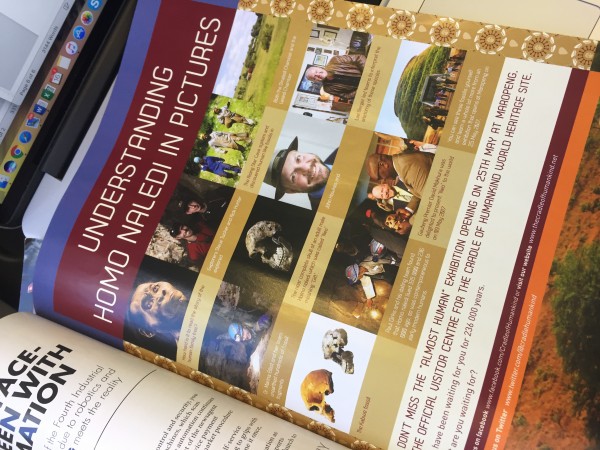 But, some things aren’t so different. While perusing the in-flight magazine, Jeff and Justin came across something remarkably familiar: A full-page ad about Homo naledi, including a photo *that Jeff had taken* of UW Anthropology Professor John Hawks, who was part of the team that excavated and described the newly discovered human ancestor. It was really neat to see this here in South Africa, as it was John’s work that helped motivate the trip.

It was also really stunning to look out of the window of the plane and see dramatic, rocky, snow-capped mountains emerging from the South African landscape. It can be easy to think of Africa as flat, arid savannah and safari-land, but South Africa is a beautiful, vast and varied nation. We’ve seen everything from bustling city to dry undulating grassland to scrub-dotted desert. There have been no lions or elephants or giraffes, but there have been colorful birds, bickering baboons, and bounding springbok. 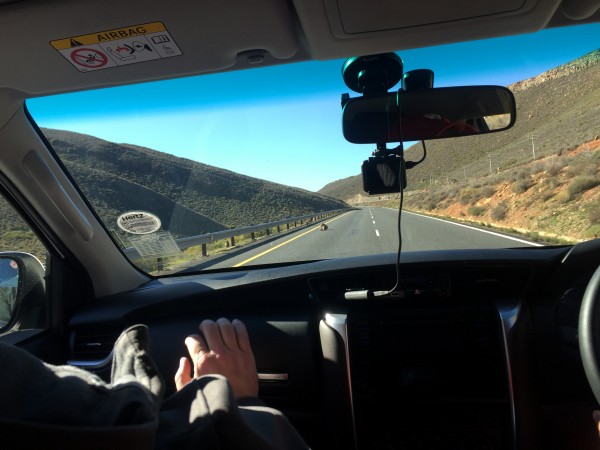 Please pardon the terrible photo, but yes, those are baboons in the middle of the highway, en route to Sutherland and SALT. Photo: Kelly Tyrrell

Once we landed at Cape Town International Airport, we were met by Eric Wilcots, professor of astronomy, and Julie Davis, one of Eric’s graduate students. We worked out the puzzle that was fitting all of our bags into a single Toyota SUV and headed up to Table Mountain National Park, a spot where we’d be able to survey the Cape Town landscape. From there we could see Table Bay to the northwest and False Bay to the southeast, the old South African Astronomical Observatory (now headquarters for the Southern African Large Telescope, where we were ultimately headed, and the administrative center for astronomy in South Africa), mountains, homes, townships and more. 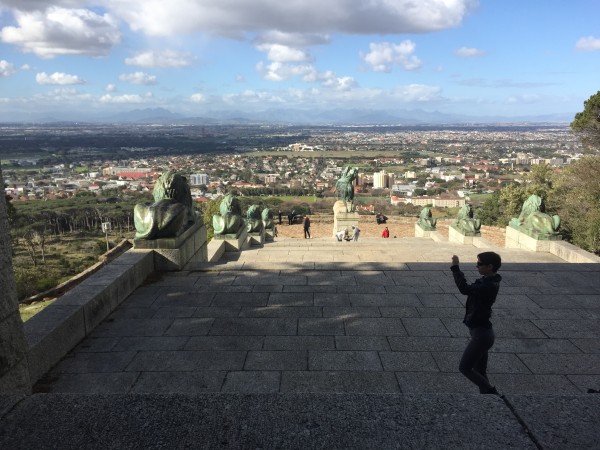 After taking in the sights we got back on the road for the hour drive to Stellenbosch, where we stayed for the night. We had dinner at our hotel, partaking in South African foods like bobotie and malva pudding and woke the next morning, Monday, to a lekker breakfast. Lekker is an Afrikaans word that means delicious, though here they pronounce it something like ‘lecka.’ Afrikaans is one of the 11 official languages of South Africa, derived from Dutch, and also one of the most common. 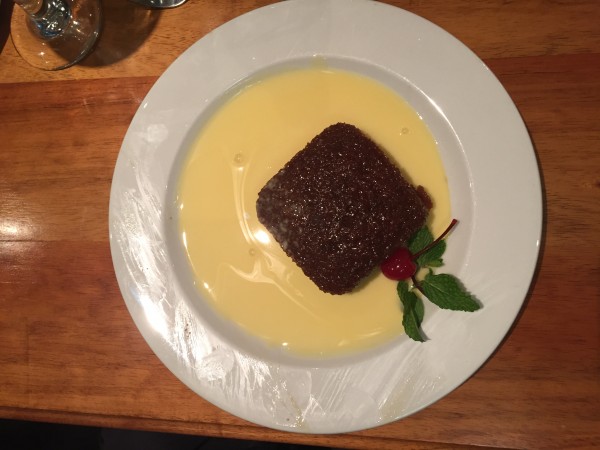 After breakfast, we headed over (and under, via tunnel) the mountains of Western Cape (Hottentots-Holland and Hawequas) en route to Sutherland, the tiny town just below the hill that hosts SALT, which is the largest telescope in the Southern Hemisphere. The “bucket” that catches the light passing through the telescope is a set of 91 hexagonal mirrors perfectly aligned into a dish nearly 11 meters wide.

We spent several days here, in a hostel built and maintained for the staff and visitors of the observatory, which sits nearly 6,000 feet above sea level atop an isolated, desert hill in the Karoo Hoogland, the local name for the region. We drank in the Milky Way, which in the Southern Hemisphere stretches from horizon to horizon and glows like a pale fire in the sky. We got lost in stars so numerous they were disorienting. We learned about the telescope, which helps scientists collect data about galaxies and stars, and helped give people back home an experience through Facebook Live of the telescope just starting to peer into the sky. 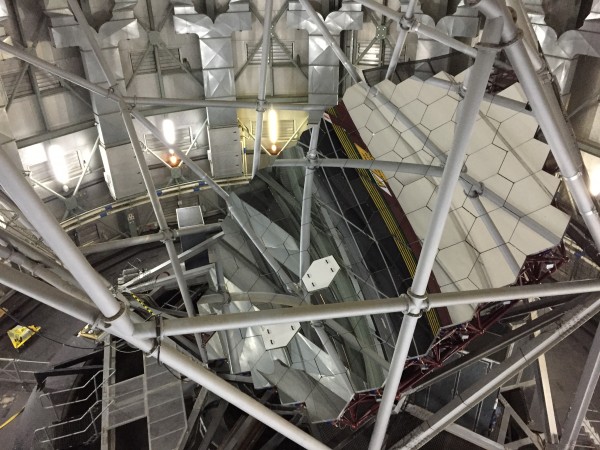 The primary mirror array on the Southern African Large Telescope, made up of 91 perfectly aligned hexagonal mirrors that capture light and allow astronomers to learn more about distant stars and galaxies. Photo: Kelly Tyrrell

We shivered in the cold – it is winter here after all but there was sky to be observed, ate delicious food prepared by the wonderful team here, talked astronomy for hours and hours, ran down and then back up the hill for fun (at least, Julie and I did), stayed up way too late, and even celebrated Jeff’s birthday.

It’s been a fantastic adventure and we are all excited about the stories we have to share. Our next leg of the journey will involve learning about the origins of life on Earth through clues left behind in rock more than 3 billion years old, found only here in South Africa and in Australia, for reasons you’ll have to wait to learn. Did we mention we will be sharing stories when we return? From there, we will meet with John Hawks and get to see Homo naledi, on display in a museum in the Cradle of Humankind. Then, it’s a long plane ride back home. But we have too much to do before then to feel too sorry for ourselves. 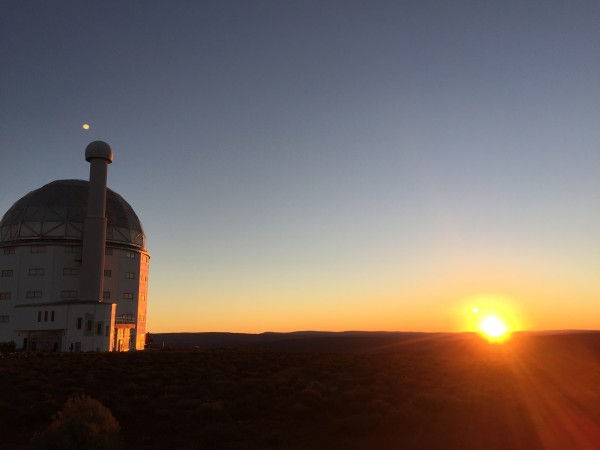 The Southern African Large Telescope at sunset, as it prepares to start collecting data from the heavens. Photo : Kelly Tyrrell