Today (yesterday, as you read this) we departed Johannesburg, headed toward Madison by way of Atlanta. As I type this sentence, we are 7,371 miles away, six miles above the Earth, soon to be over ocean.

Our South African journey culminated as it began, in the Cradle of Humankind, in pursuit of stories about our origins as human beings. 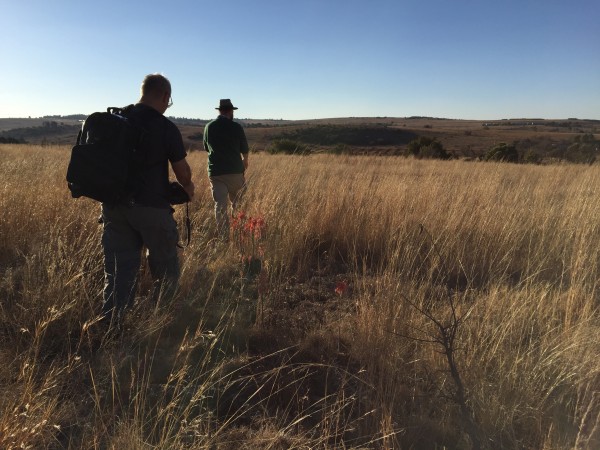 UW–Madison photographer Jeff Miller makes photos of John Hawks at the top of the Rising Star cave system in the Cradle of Humankind in South Africa. Photo: Kelly Tyrrell.

Since my last post, we returned to Johannesburg from Sutherland, home of the Southern African Large Telescope. We visited the University of Johannesburg to meet with Nic Beukes, a professor of geology known to those in his field – including UW Madison geologist and Nic’s collaborator, Clark Johnson – as the “god of early earth geology.”

To enter the university, we passed through tight security, as it has seen destructive and violent protests in recent years, a reflection of the tumult and tough economic conditions the country has faced since the fall of apartheid. Sometimes, security searches visitors’ “boots” (that is, trunks, in South Africa) in order to enter, because, as one of our hosts there explained, protestors have smuggled people and “Molatov cocktails” in this way.

Nic, a fit man with smiling brown eyes, a shock of white hair, and rich with the respect of all those who cross his path (those in his department affectionately call him “Prof”), showed us around and explained his work studying some of the oldest, geologically unadulterated rocks in the world. It is these rocks that he and Johnson examine for evidence of early life on Earth, tracing back through time more than 3 billion years. Chemical signatures in the rock show that microorganisms known as cyanobacteria were “breathing” oxygen in shallow seas, around a billion years before oxygen appeared in the atmosphere, before plants begin to produce it through photosynthesis.

The rocks were brilliant shades of red, green, blue and gray. They were assembled in long metal trays, arranged by their depth on the landscape, originally gathered in the Barberton Mountains of northeastern South Africa. 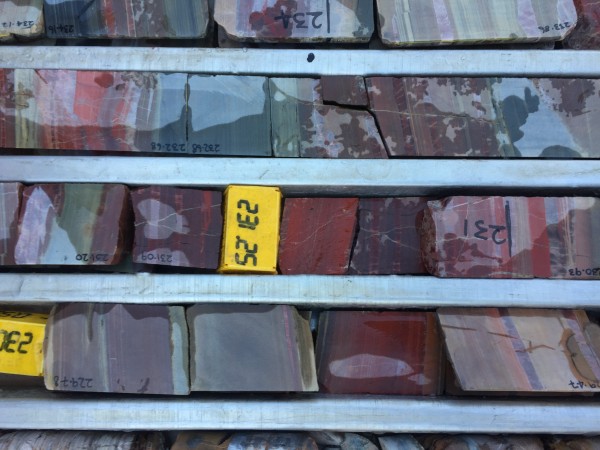 Sections of colorful rock from the Banded Iron Formation, collected in the Barberton Mountains of northeastern South Africa. These rocks contain evidence of the earliest life on Earth, in the form of iron and uranium deposits that could only have been due by microorganisms in shallow seas that would have covered the planet more than 3 billion years ago. Photo: Kelly Tyrrell

We met with Nic’s younger colleagues, one studying formations in old rock, called stromatolites (you can see these in the Geology Museum) associated with cyanobacteria, dating as far back as 3.5 billion years, and another using the Earth’s magnetic field – trapped in rock – as a clock to help reveal more about the context of these rocks and they evidence of life they contain.

We took a day of rest after this, our first in 10 days, and explored more of South Africa. Justin found his way to a Johannesburg green (the kind involving clubs) and Jeff and I ventured on a game drive. Traversing an ancient crater now converted into a national park, we marveled at rhinos and giraffes, zebras and elephants, warthogs and lions. As in much of the U.S., major wildlife in South Africa now resides in reserves and parks dedicated to conservation. Johannesburg is a large and sprawling metropolis, attracting people, cuisine and consumerism from all over the world. A hippo would be as foreign here as a buffalo in New York City. But two-and-a-half hours from there, at Pilanesburg National Park, we found four of South Africa’s Big Five. 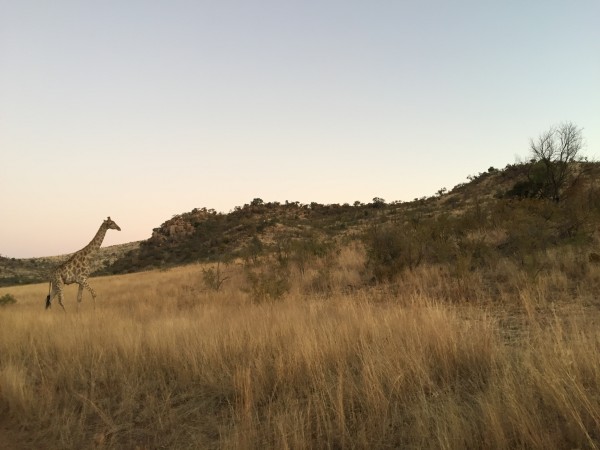 At Pilanesburg National Park in northwestern South Africa, a giraffe crosses the road ahead of us while on a game drive. Photo: Kelly Tyrrell

Rest day accomplished, the following morning we drove 45 minutes northwest once again to Swartkrans, where we met with anthropology professor Travis Pickering for final (video and photo) shots and a few more questions. Jeff and I then visited the Apartheid Museum, in southern Johannesburg. The museum was a sobering experience, tracing the history of segregation and racism in South Africa, which manifested in 1948 as apartheid, defined by institutionalized national policies intended to separate the races of the nation.

The ground for apartheid was sewn during the nation’s early colonial days, in the 1600s, and its seeds were planted in the late 1800s, when the discovery of gold and diamonds deep underground fueled pre-existing tensions between the country’s Dutch and British colonizers, and exploited cheap African labor, soon spiraling into policies meant to prevent racial mixing and maintain white supremacy. Apartheid was not dismantled until 1991, under South Africa’s late president, Nelson Mandela. 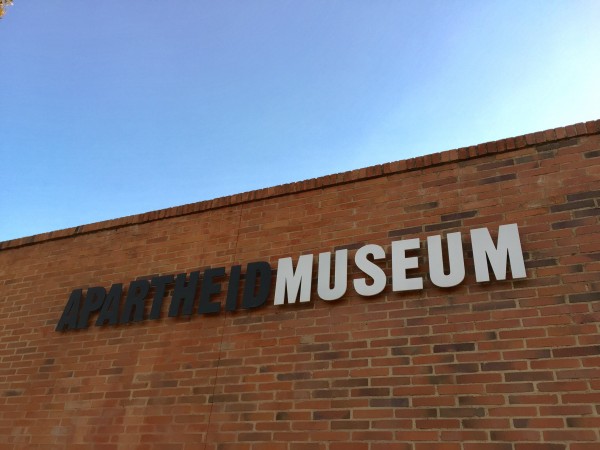 A visit to the Apartheid Museum in South Africa chronicles a dark chapter of the nation’s recent past. Apartheid was dismantled in 1991, ending decades of institutional oppression of non-white South Africans. A visit to the museum is an important and sobering experience. Photo: Kelly Tyrrell

Among the most important lessons we learned here, with our stories in mind, is Africa’s place as the origin of our humanity. But we also learned so much more.

From there, we met with anthropology professor John Hawks, whose participation in the discovery of a brand new human ancestor – Homo naledi – in the Cradle in 2015 was the impetus for our trip to South Africa in the first place.

We joined Hawks at the Rising Star cave system, about a mile away from Swartkrans, and stood in awe at the mouth of the cave where six diminutive anthropologists – all female – ventured into its tight and harrowing chambers to recover more than 1500 fossil bones and a nearly complete fossil skeleton from a species never before described anywhere in the world. Today, the fossils are on display for all in a museum called Maropeng in the Cradle of Humankind. 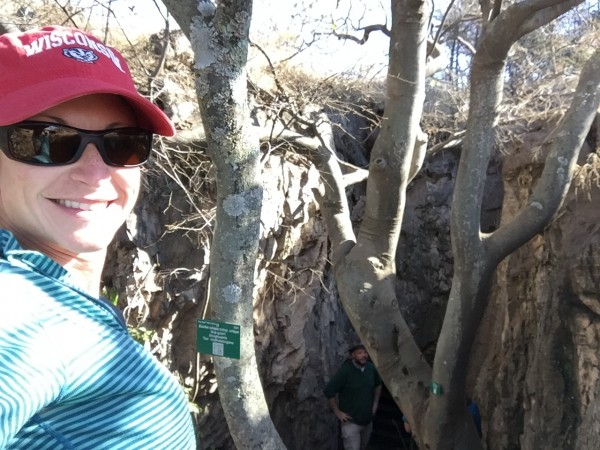 A selfie from a tree at the entrance to the Dinaledi chamber of Rising Star cave in the Cradle of Humankind, where six lithe female anthropologists recovered more than 1500 fossil bones of Homo naledi, a newly described human ancestor. Professor John Hawks, who was part of the team that discovered Homo naledi, stands at the cave entrance in the background. Photo: Kelly Tyrrell

We had the fortune of visiting the fossils before the museum opened to guests for the day (which meant an early, breakfastless start to our final day in South Africa), and a private tour with Hawks. We lingered until after the museum opened and the early-bird guests to Maropeng were treated with not only a visit to the Homo naledi fossils in the final “chamber” of the exhibit, but also a visit with Hawks himself. We felt quite fortunate to be a part of such a special occasion for visitors, who asked question after question until museum guides led them out and on their way. With a flight to catch, we, too, departed the Cradle. 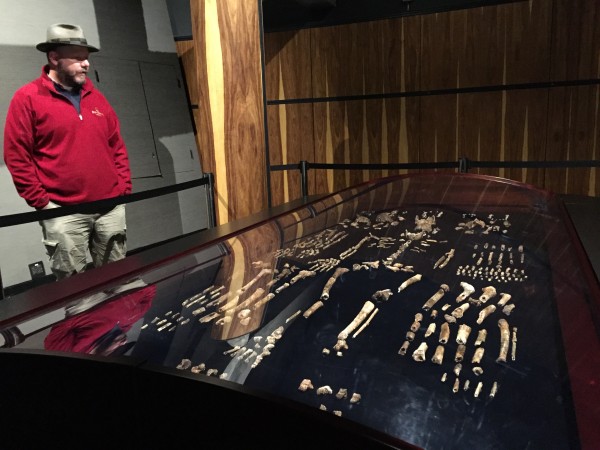 Anthropology Professor John Hawks stands with the assemblage of fossil bones of Homo naledi, recovered from a dark and narrow cave in the Cradle of Humankind in South Africa. Photo: Kelly Tyrrell

Fourteen days (fifteen as you read this). That is how long it has been since we arrived at Dane County Regional Airport on a muggy Monday morning, and, coffee in hand, boarded a plane that helped deliver us to the arid South African landscape. To the origins of humankind. The origins of life on Earth. And to a remote window into the sky helping us grasp the origins of our universe. I feel I have traveled a lifetime since.

It is a fortunate team that gets to stand in a cave where our ancestors once carved stone tools in order to survive the threat of large cats on the prowl. A team that gets to stand under a blazing nighttime sky wondering at all those balls of gas, the very same from which we are all assembled. A team that has the privilege of holding the very Earth from which we derived in their own mortal hands. For the rest of our lives we will remember the fortunate circumstances that brought us to South Africa, to learn and discover and marvel at it all with the very experts at UW–Madison who call this their life’s work. In exploring our origins, these professors and their protégé are helping Wisconsin students – all of us – understand from whence we came. I know I will never forget and I hope the stories we share in the coming months help you take part in that adventure, too.