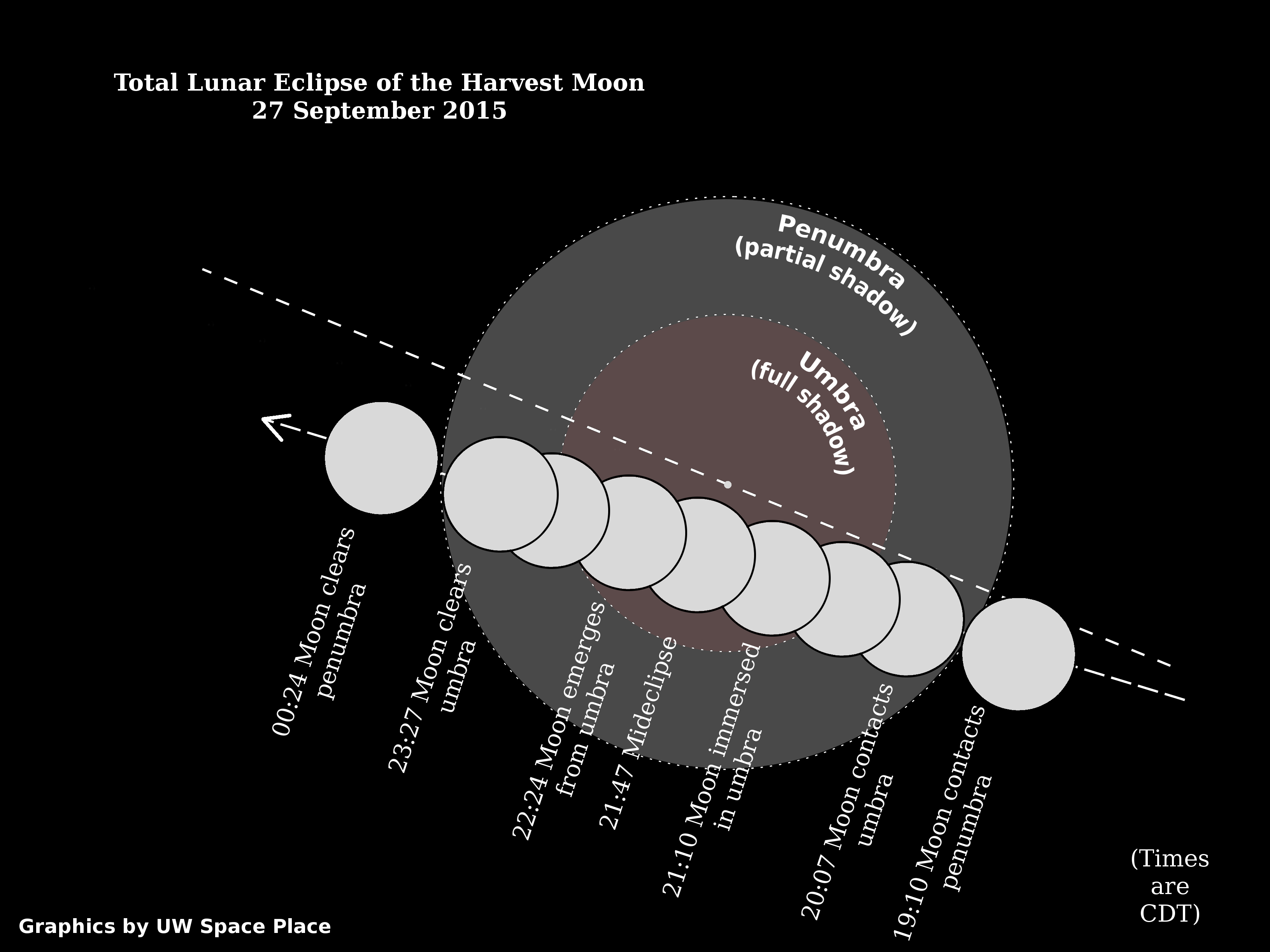 On Saturday, 27 September 2015, the full moon – a harvest moon – will be at its closest point to Earth along its orbit. And it will also be in total eclipse. This rare event, called a Supermoon by some, hasn’t happened since 1982 and it won’t again until 2033. If our fickle fall weather cooperates, we’ll be able to see it on Sunday night. Jim Lattis, from the UW-Madison Department of Astronomy and UW Space Place, explains why the term Supermoon is mostly hype – except on the coasts, outlines the best times for viewing it, and more: 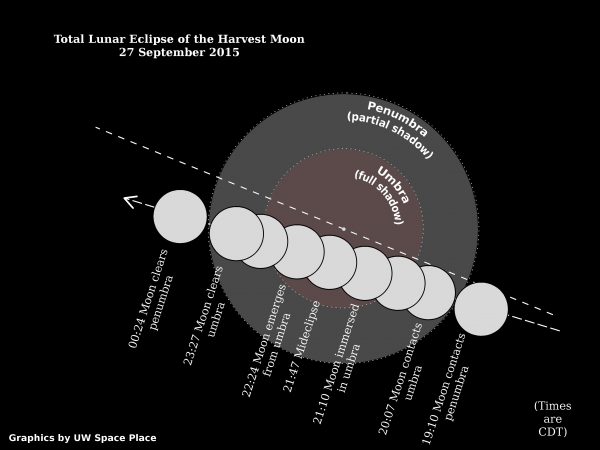 September this year offers a very nice lunar eclipse for observers from Western Europe, across the Atlantic Ocean, and across the Americas.  Lunar eclipses always happen at full moon, because that is the only time it is possible for the Moon to pass through Earth’s shadow. As the full moon closest to the autumnal equinox (which is today, 23 September), this will be 2015’s Harvest Moon. So it’s an eclipse of the Harvest Moon. Because the eclipse happens to occur very close to the time of perigee (the point in the Moon’s orbit when it comes closest to Earth), it will be near its greatest apparent size from our point of view. Though the term is misleading, this is often called a “Supermoon.”  In truth, its closest approach is not that much closer than its average distance, so the “Supermoon” effect is largely in the eye of the beholder.

To roughly illustrate the “Supermoon’ effect, you can make a simple scale model. Try holding an ordinary kitchen match (not burning!) about one foot from your eye. The match head will appear to be about as large as the full moon. Now move the match an inch closer to your eye. It will appear be larger than before because it’s closer. The match head one foot away is analogous to the average apparent size of the full moon. The match head an inch closer illustrates how much larger the “Supermoon” appears. (In fact, the difference in the apparent sizes of the match and the “Supermatch” is greater than the difference in the apparent sizes of the average full moon and the super moon.) There is certainly a difference, but without some kind of comparison or measuring device, no one would notice the difference between the average full moon and a “Supermoon.” So the term “Supermoon” is just another bit of hyperbole deployed in the constant struggle for your attention.

There is, however, one super effect a “Supermoon” can have, but it has nothing to do with its appearance. It is the enhanced effect on ocean tides. Ocean tides are higher than average at full and new moons owing to the combined tidal forces of both Sun and Moon. These are called the “spring” tides. (No relation to the season of the year.) And when perigee coincides with new or full moons, the spring tides are extra high. (So perhaps they should be called super spring tides?) This can be a major concern in oceanic coastal environments, especially if a super spring tide should coincide with a flood tide brought in by a major storm or hurricane. 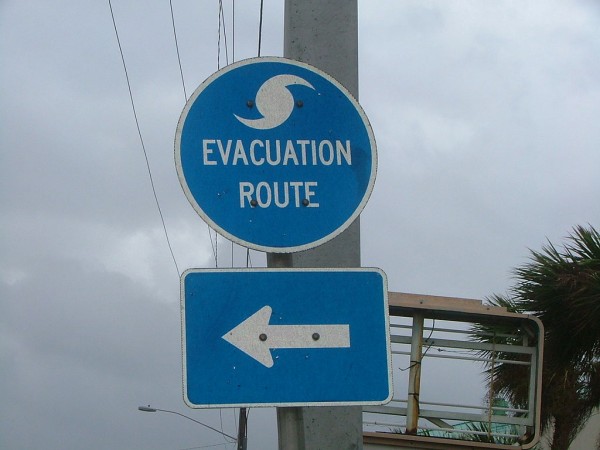 Because this month’s is a relatively deep eclipse, totality lasts nearly an hour and a quarter. In North America’s midwest, the Moon will be well up in the eastern sky (moonrise occurs about a half hour before the eclipse begins) and high overhead as the event ends around midnight. Specific times for the import stages of the eclipse are listed below:

The Earth’s shadow consists of an inner region, called the umbra, where there is no direct sunlight, and an outer region, the penumbra, where the sun is only partially blocked. Because the Moon’s surface is still illuminated by direct sunlight when it passes through the penumbra, only a slight darkening, nearly imperceptible, happens. But when the Moon crosses into the umbra, the effect is dramatic.

Even when the Moon is totally eclipsed, immersed in the umbra, it is not totally dark, because Earth’s atmosphere scatters and refracts some sunlight onto the lunar surface. This indirect sunlight is reddened, for the same reason the setting Sun is red, so the totally eclipsed lunar disk can take on a dull reddish color, though the amount of reddening and the resultant color depend on Earth’s atmospheric conditions at the time of the eclipse. 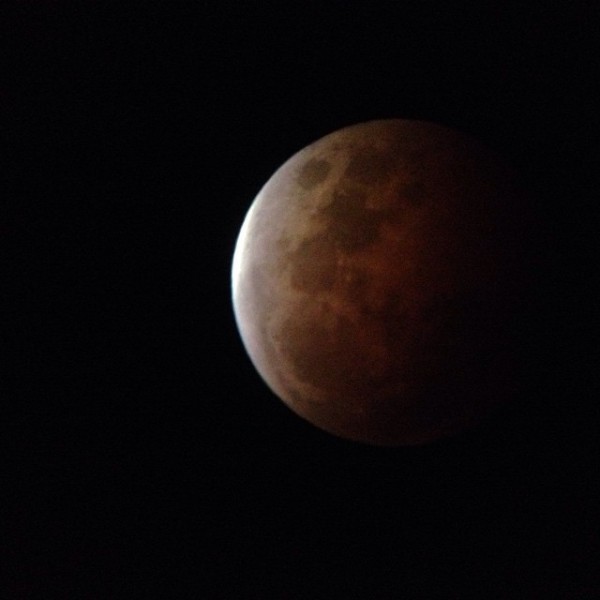 Late stages of a total lunar eclipse – a “bloodmoon” – as seen from Madison, WI on 8 October 2014. No photographic enhancement here!//Credit: Kelly Tyrrell

Like the “Supermoon,” another bit of hyperbole around lunar eclipses is the use of the term “Bloodmoon.” This comes, of course, from that dull red appearance that the disk of the totally eclipsed moon can take on.  However, to suggest that the typical color is anything like blood red is a considerable exaggeration, perhaps a result of fervid imaginations. Dim, glowing charcoal reds, or dull, coppery reds are more apt descriptions (photographic enhancements notwithstanding). The color actually is highly variable and sometimes even absent. Several total lunar eclipses in the 1990s were nearly colorless, an effect commonly attributed to high altitude volcanic dust from the eruption of Mt. Pinatubo, which erupted in 1991. So to use “Bloodmoon” as synonymous with total lunar eclipse is more hype.

Observing a lunar eclipse is about as easy as astronomical observing gets. You don’t need a finding chart to locate the Moon! And unlike a solar eclipse, where eye damage is a distinct hazard, observing a lunar eclipse requires no precautions or special equipment. Just find a comfortable place under a clear sky. Binoculars or a small telescope aimed at the Moon can add a lot to the experience. It all happens at a slow, majestic pace, so there’s plenty of time to compare naked-eye with binocular views and to come and go, even relocate, during the event.

And if you prefer to watch with others, join UW Space Place at Madison’s Wingra Park on Sunday from 8 until 10 pm.