The following is a guest post from Jim Lattis, director of UW Space Place and astronomy historian from the UW-Madison Department of Astronomy:

The Perseid meteors are one of our best and most reliable meteor showers of the year. Their peak activity typically now occurs on the nights of August 11-13, although it is not uncommon to see Perseids for a week or so before and after their peak. Early morning hours from midnight to dawn, preferably in a dark location, are the best time to observe them. As you watch them scratch out luminous paths through our outer atmosphere, try to imagine what you would make of the sight if you thought that interplanetary and interstellar space were devoid of matter. What are those streaks of light? Glowing volcanic gases, perhaps? Pockets of explosive methane? 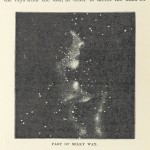 From page 188 of The Half Hour Library of Travel, Nature and Science for young readers//Credit: By The British Library, via Wikimedia Commons

As an astronomical topic, meteors – the flashes of light we see in the dark sky for only a moment –are a relatively recent phenomenon whose nature ended up taking scientific thinking about the universe in new directions. Before the early 19th Century, meteors were considered to be atmospheric (i.e. meteorological) phenomena, as indeed Aristotle himself had considered them, and as their name suggests. For astronomers of the early 1800s, extraterrestrial matter fell into just a few categories: stars, planets and their moons, comets and asteroids. Asteroids were numerous, but confined to the distant zone between Mars and Jupiter. Comets were mysterious gaseous bodies that violated the regularities found in the planetary orbits. Beyond that, space seemed empty; a true void. A space-filling aether was imagined by some as the medium by which light propagated, but that aether could not be substantial without slowing down the planets.

The first celestial connection for meteors came about in the wake of the famous meteor storm of November 1833. By collecting reports of many geographically distributed observers, astronomer Denison Olmstead, of Yale University, showed that there was an identifiable “radiant point” from which the meteor trails seemed to emanate. The fact that the radiant point moved with the stars and seemed fixed in the constellation Leo suggested to Olmstead that the meteors were the trails of extraterrestrial particles, perhaps a cloud of particles in orbit around the Sun. He suggested an orbit that would bring the Earth into proximity with the cloud annually, and the annual emanation of meteors from Leo in mid-November became known as the Leonid meteor shower.

This was a new concept of celestial matter: particles that were neither comets, nor planets, nor asteroids. Pursuing this idea, researchers found historical records that began to reveal evidence of occasional -perhaps periodic, perhaps annual – episodes of enhanced meteor activity. The meteors of mid-August, occurring near the feast of St. Lawrence, were known in folklore as the “Tears of St. Lawrence,” and in 1835 Adolphe Quetelet identified their radiant point as within the constellation Perseus; these are the Perseid meteors. 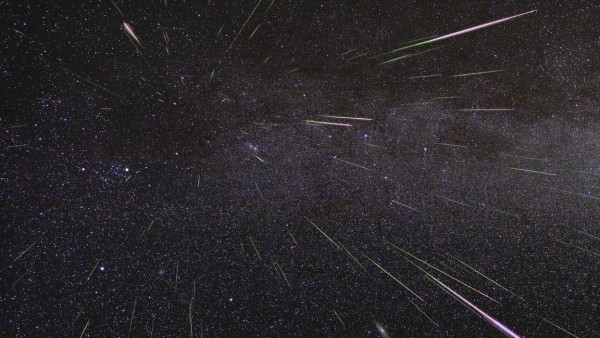 An outburst of Perseid meteors lights up the sky in August 2009 in this time-lapse image. Stargazers expect a similar outburst during next week’s Perseid meteor shower, which will be visible overnight on Aug. 11 and 12//Credit: NASA/JPL

In 1866, Giovanni Schiaparelli showed that the presumed particles of the Perseid swarm must share their orbit with the bright Comet Swift-Tuttle, which had appeared in 1862. The connection between meteoritic particles (which we now call meteoroids) and the comet was not clear: Do comets decay into the particles, or do the particles coalesce into comets? Or, do they have some other common source? After all, not all meteors occurred in showers, and not all showers were associated with comets. We now know that comets produce the particles, but regardless of that, meteoritic matter became an established component of the interplanetary world, and the vast reaches of cometary orbits suggested that meteoritic matter might come from far beyond the solar system.

The hypothetical reserves of interstellar meteoritic matter was in the background of thinking about stars and their formation, but again whether as cause or effect was not 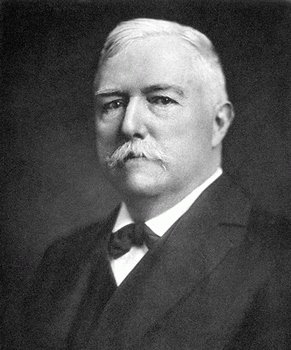 Edward Emerson Barnard (December 16, 1857 – February 6, 1923) was an American astronomer. He was commonly known as E. E. Barnard, and was recognized as a gifted observational astronomer. He is best known for his discovery of Barnard’s star in 1916, which is named in his honor.//Courtesy of: Wikimedia Commons

clear. That vast amounts of matter might be out there was also suggested by studies of “dark nebulae.” The studies of pioneering astrophotographer E. E. Barnard suggested that what looked like extensive voids or rifts among the stars of the Milky Way might rather be dark clouds obscuring the light of star fields behind them. What might these dark clouds hold? Swarms of meteoritic particles? Clouds of gases? Perhaps fine bits of matter of intermediate size, something like dust? And how is it distributed? Primarily in the dense clouds, as mapped by Barnard, leaving the rest of interstellar space effectively transparent? Or in addition to the dark clouds, might it be more thinly dispersed, with effects so subtle that they had gone unnoticed?

These questions became vitally important to how astronomers compared the apparent brightness of stars in efforts to judge their distance. If two similar stars have different brightnesses, then the dimmer one must be farther away, or perhaps it is dimmed by obscuring matter, or perhaps both effects are at work.  It turns out, in fact, that interstellar matter has very significant and measurable effects on the brightness of stars, but this was not definitively shown until 1930 by astronomer Robert Trumpler of Lick Observatory.  Quantifying the effects and using them to find correct distances was pioneered by UW-Madison Washburn Observatory astronomer Joel Stebbins, who was also able to show that most of the mass of that interstellar matter was neither gas nor meteoroids, but what we now call interstellar dust. Light scattering by dust produces reddening of the light, which neither gas nor larger particles do. The photometric methods developed by Stebbins could measure this reddening and analyze the clouds of interstellar matter.

Thus, the modern concepts of the stuff we find in space emerged from those streaks of light that we see in the night sky as “falling stars.” The “Tears of St. Lawrence” are really bits of the comet named 109P Swift­-Tuttle. The small flakes and particles produced by the comet form a debris field along its orbit, which Earth traverses each year in mid­-August. That’s why the meteor shower is an annual event. The comet, with an orbital period of about 120 years, last passed through our neighborhood of the solar system in 1992, so it will be nowhere nearby us this year, but as Earth passes through the comet’s litter, the bits that hit our upper atmosphere will be vaporized in flashes, making the visible trails we call a meteor shower.

In a typical year we might see something like 60 or so Perseid meteors per hour near the peak, although the rates are sometimes much higher for brief intervals (as they were in the years just before and after the comet’s passage in 1992 and as some experts are predicting this year). The number we can see, however, also depends greatly on the local sky conditions and, critically, the phase of the Moon. Strong moonlight (as well as urban light pollution) greatly reduces the number of visible meteors. This year the roughly first quarter moon will set by about 1 a.m., making observing conditions in the predawn hours ideal. All you need is a lawn chair, a dark sky, and the fortitude to spend a few predawn hours gazing up into the rest of the universe while cometary bits comparable in size to snowflakes and peppercorns give up their energy in a silent shower of light. 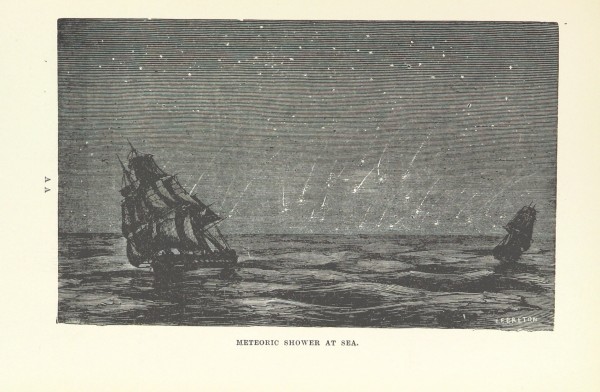 From page 369 of The Half Hour Library of Travel, Nature and Science for young readers//Credit: By The British Library, via Wikimedia Commons