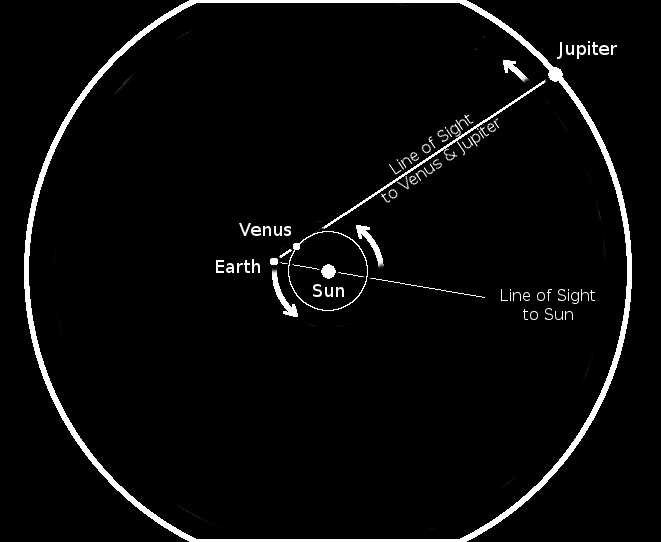 Home » Astronomy » Jupiter and Venus dance in the sky*

A simple diagram of Earth, Venus and Jupiter and they make their way around the Sun. From Earth, Jupiter and Venus will appear very close together in the night sky on 30 June 2015.//Credit: Jim Lattis, UW-Madison

*Or as the New York Times put it: Watch Venus take Jupiter in a race around the Sun

You’ll have a unique view of the sky tonight. Jim Lattis, director of the UW Space Place and a Department of Astronomy faculty associate, explains why: 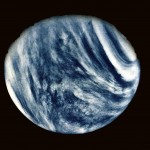 All planets orbit counterclockwise around the Sun, which the diagram above shows. Now, imagine Earth a week or so ago. At that time, the lines of sight to Venus and Jupiter would have diverged at a greater angle to each other, but as Earth has swung around, the lines of sight have converged, with Venus “catching up” with Jupiter. As Earth moves on from tonight, Venus’s line of sight will swing ahead of Jupiter’s, so that Venus will “overtake” Jupiter—as seen from Earth, of course.

The motions of both Venus and Jupiter have contributed relatively little to this dance in the evening sky—it’s mostly Earth’s motion that is changing things. As Earth continues to move, the line of sight to the Sun is also moving and will catch up quickly with first Jupiter and, before long, Venus. This 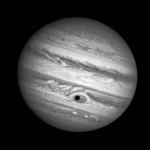 means that both of those planets will soon be immersed in evening twilight and effectively disappear from view during July.

The best place to view these planets in coming days is one having a low western horizon, such as looking westward from the eastern shore of a lake (post-Terrace sunset?), or perhaps from a hill top. No special equipment is needed to appreciate a sight like this, but a pair of binoculars can be handy.

To see more posts here from Jim, check out:

Also, click here to watch UW-Madison astronomy students talking with Channel 3000 about Universe in the Park and tonight’s dance.