Home » Astronomy » Mars is at opposition, so what does that mean?

By Jim Lattis, Director of UW Space Place at the University of Wisconsin–Madison

You may have heard that Mars reached opposition on 27 July 2018. But what does that mean? It means that Mars is bright and easy to find in the night sky. It’s called opposition because that’s when Mars is 180 degrees away from – so directly in line with – the sun. When the sun is setting, Mars is rising and will cross the sky all night, setting at sunrise.

Opposition is also when the planet’s distance to the Earth reaches a relative minimum. Because it’s closer, it appears bigger and brighter in our sky. Already since spring, we’ve seen oppositions of Jupiter (9 May), then Saturn (27 June), so it’s been a good summer for planet viewers. (Uranus, Neptune and Pluto have also reached opposition this year, but they are all dim enough that most casual star gazers won’t see them at all.)

Planetary orbits drive opposition and oppositions of Mars are a bit more complicated than those of others because the Martian orbit is much more elliptical than the orbits of planets such as Jupiter and Saturn. As astronomer Johannes Kepler described in the early 1600s, planets follow elongated circular paths – ellipses – rather than perfectly-circular paths around the sun. 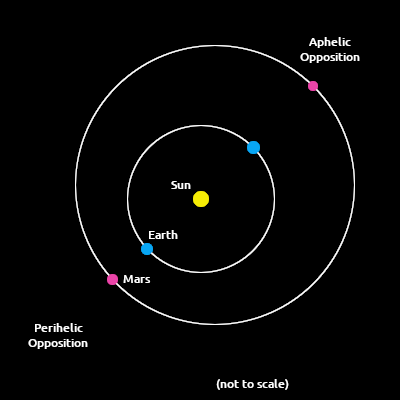 Mars at opposition. The Red Planet has a more elliptical orbit than other planets, which means its distance from the Earth at opposition can vary greatly. Image: Jim Lattis, UW–Madison

However, even perihelic oppositions effectively never happen precisely at perihelion, so there are small differences from one event to the other. For instance, at the opposition of 27 August 2003, the minimum Earth-Mars distance was just shy of 56 million kilometers. That means Mars appeared up to 10 percent brighter in 2003 than in 2018.

This is nothing to get excited about, really, but it excited people nevertheless. It turns out the opposition of 2003 brought it slightly closer to Earth than in all previous Mars oppositions in the previous 60,000 years. This slight edge in “favorability” of that opposition was responsible for a frenzy of interest among astronomy enthusiasts around the world. But the dramatic nature of that event was more about its historical context than its intrinsic virtues.

Headlines declaring the closest opposition in 15 years – which would be this year’s – just don’t get the same amount of attention. 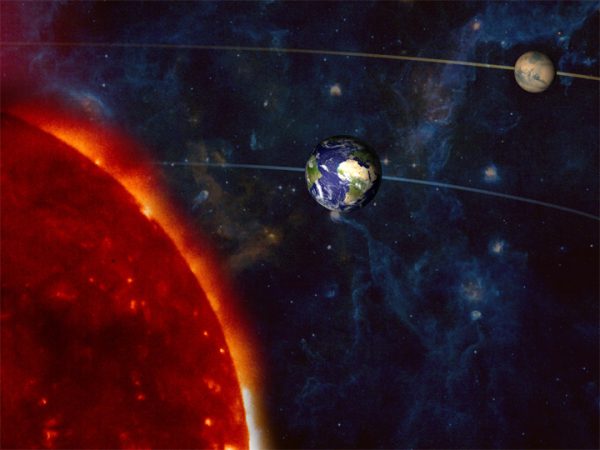 Artist’s illustration of Mars at opposition. Note that the sun, Earth and Mars align, with the Earth in the center. Not to scale. Credit: NASA/JPL-Caltech

Despite the favorability of both the 2003 and 2018 oppositions, neither one was particularly easy to observe for would-be viewers in the northern temperate regions of the Earth. The perihelion of Mars’ orbit lies in the direction of the southern parts of the ecliptic (the plane of Earth’s orbit), roughly toward such constellations as Capricornus and Aquarius. Hence, perihelic oppositions favor southern observers and always occur low in the sky, near the horizon, relative to us northerners.

In 2003, Mars at opposition was nearly 16 degrees south of the celestial equator, making it inconveniently low on Wisconsin horizons, and in 2018, Mars at opposition is more than 25 degrees south, so far worse than it was in 2003. In practical terms, this means that even the best of (northern) telescopes look at Mars through our dense and unsteady atmosphere, making the reddish disk blurry and unsteady even on a good night. The really good Martian oppositions favor the southern hemisphere, while we northerners get the best views of the far less-favorable aphelic oppositions, which occur in northern parts of the ecliptic, out in the direction of constellation Leo, for example.

This doesn’t mean you shouldn’t look for an opportunity to see Mars this summer, of course, but if Mars viewing is a priority, pack up your telescope and make for parts closer to the equator! But also make a note of October 2020, the next opposition of Mars. While it won’t be a record-breaker by any means in terms of distance, it will happen considerably farther north, about 5 degrees north of the celestial equator. Even if it will be a bit farther away, in the clear skies of October views of Mars should be breathtaking. 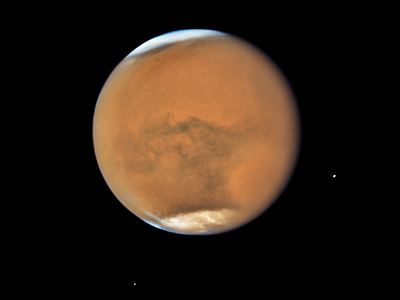 NASA’s Hubble Space Telescope photographed Mars on July 18, 2018, near its closest approach to Earth since 2003. The planet was observed near opposition, when the Sun, Earth and Mars are lined up, with Earth sitting in between the Sun and Mars. This proximity gives the Red Planet its brightest appearance in the night sky since the 2003 opposition. Credit: NASA