This is a guest post by Jim Lattis, the director of UW Space Place.

Drop by the Washburn Observatory on the University of Wisconsin–Madison campus from 6:30 a.m. to noon on Monday, Nov. 11, to get a safe, rare glimpse of Mercury as it crosses the face of the Sun. This free event is hosted by the Astronomy Department and is weather permitting.

In 2004 and 2012, we saw our neighboring planet Venus transit the bright disk of the Sun in the form of a small, black disk crossing the star’s face. Transits of Venus are rare, and there won’t be another until December 2117. These events are analogous to a solar eclipse, in which the Moon crosses the face of the Sun. But while the Moon can completely block the sun — creating the unique effects of a total solar eclipse — no planet’s disk can do the same.

Mercury transits typically occur in pairs: one in May followed by one in November, about three and a half years apart. The May transit is often skipped. The most recent transit of Mercury was in May, 2016. After this year’s event, the next Mercury transit will occur on Nov. 13, 2032.

Seen against the solar disk, Mercury’s disk is so small that a telescope is required to make it visible. In fact, it would take over 190 Mercury disks to span a solar diameter! In contrast, Venus’ disk could be seen on the Sun without magnification. The diagram shows the path that Mercury’s disk will take across the face of the Sun and gives times local to Madison.

So come out Monday to take in this special event. In case of extensive cloud cover, this event will be canceled.

We want to remind you that  aiming a telescope or binoculars at the Sun is a dangerous operation, requiring special equipment and techniques, and therefore best left to experienced observers. At the Washburn Observatory event, we’ll be able to view the transit safely. 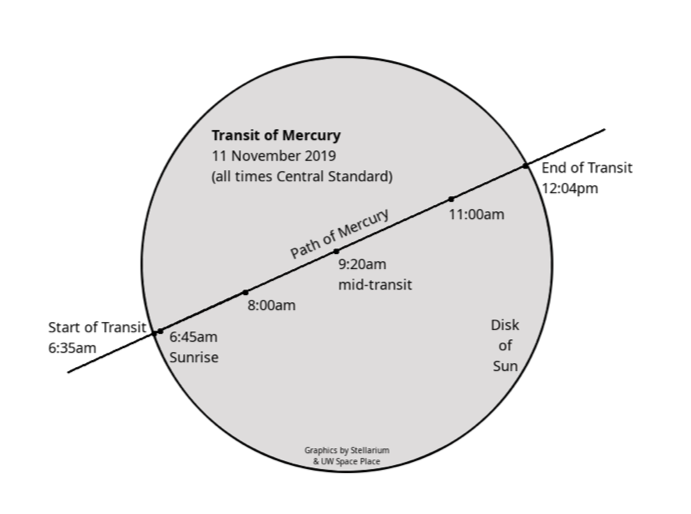 The 2019 Mercury transit across the Sun will start just before sunrise and end around noon on Monday, Nov. 11.