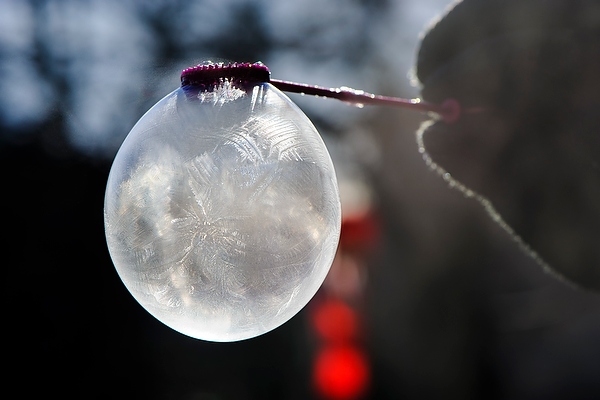 Ice crystals form on the orb of a soapy bubble that froze during subzero weather atop Bascom Hill at the University of Wisconsin-Madison on Jan. 8, 2014.//Collaborative photo by Jeff Miller and Bryce Richter, UW-Madison

As we begin another frigid week in Madison – one dominated by subzero temperatures and below-normal highs and lows – UW-Madison’s Steve Vavrus, senior scientist in the Nelson Institute Center for Climatic Research, has co-authored a new study that may explain why. The study, also from Rutgers University’s Jennifer Francis, looks at the effects of a wavy jet stream, caused by Arctic warming that is outpacing warming at the equator.

Last week, Rutgers issued a news release to explain its findings and implications. The Nelson Institute linked to that here, but it’s also pasted below. Or, you can click here to find a story from Lehigh Valley Live/The Express-Times of Pennsylvania:

Prolonged cold snaps on the East Coast, California drought and frozen mornings in the South all have something in common – the atmospheric jet stream which transports weather systems that’s taken to meandering all over North America.

Rutgers University climate scientist Jennifer Francis and colleagues, including University of Wisconsin-Madison scientist Stephen Vavrus, link that wavy jet stream to a warming Arctic, where climate changes near the top of the world are happening faster than in Earth’s middle latitudes.

A new study from Francis and Vavrus, an atmospheric scientist at UW-Madison and senior scientist with the Nelson Institute’s Center for Climatic Research, published in IOPscience, backs up that theory, with evidence linking regional and seasonal conditions in the Arctic to deeper north-south jet stream waves which will lead to more extreme weather across the country.

“The real story is how persistent the pattern has been. It’s been this way nearly continually since December 2013…Warm in the west, cold in the east,” Francis said. “We think with the warming Arctic these types of very wavy patterns, although probably not in the same locations, will happen more often in the future.”

This research has been controversial since the Hurricane Sandy disaster, when the wavy jet stream steered the storm on its sharp left turn and smack into the Jersey Shore. Francis and other researchers say the jet stream’s configuration was a key ingredient in the monster storm.

Very wavy jet-stream patterns have been occurring more often since the 1990s, Francis says, and are now affecting weather around the northern hemisphere. This mid-February cold snap, for example, that has left millions of people waking up to below-zero and single-digit temperatures, might not be as deep as some southward dips, called troughs, in the jet stream. But the overall pattern has been around for weeks, and is also responsible for Boston’s record snowfall this winter and the worsening drought in western states.

In contrast, an opposite pattern in winter 2012 led to more than 3,000 high winter temperature records being broken in the eastern U.S., Francis notes.

“California is still dealing with this record-breaking drought, and Alaska is having one of its warmest winters on record,” Francis said.

The phenomenon called Arctic amplification – defined as the enhanced sensitivity of the Arctic region to warming compared to lower latitudes – is changing large-scale upper level flows in the atmosphere, the paper suggests. Looking back at records dating to the late 1940s, it is evident that Arctic amplification of global warming is now continuing through all four seasons of the year, according to Francis and Vavrus.

One challenge addressed by the new study is measuring the extent and strength of those jet stream waves, Vavrus said.

While using a traditional measure of surface air temperature changes between Arctic regions and lower latitudes, Francis and Vavrus also present an alternative measure of the thickness of temperature layers higher in the atmosphere.

Even scientists who are skeptical of the findings say it’s a good effort to resolve the problem of differentiating real changes in the jet stream’s behavior from random noise. This is an issue  inherent in climate research – teasing out real long-term climate change from mere year-to-year variability of weather.

Francis and Vavrus acknowledge criticism that their work is looking at relatively recent years since Arctic amplification emerged as a clear signal. Still, the researchers say there is no mistaking the trend since the 1990s: the Arctic probably hasn’t been this warm since the last major inter-glacial period 125,000 years ago.

Back then, Francis said, the Earth was several degrees warmer than now and sea levels were several meters higher. “The recent changes we’ve seen are clearly linked to increasing greenhouse gases, and there’s no sign of abatement in our use of fossil fuels. This does not bode well for impacts of extreme weather and the ecosystem as a whole,” she said.

“The biggest challenge in our research,” Francis said, “is that rapid Arctic warming started very recently, so detecting a clear atmospheric response and linking it to a particular cause may take another decade. In the meantime, Mother Nature seems to be acting out.”