In a September 8, 2016 article in the New York Times, President Obama called the trends in climate change “terrifying.”

Today in Madison, it’s November 1 and the mercury is forecast to hover around 70 degrees. Nationwide, the National Oceanic and Atmospheric Administration (NOAA) predicts a November of near-record warmth.

So, we bring you a Q&A the Nelson Institute of Environmental Studies’s Jenny Peek recently did with UW–Madison climate expert, Galen McKinley:

The Earth is warming at a pace “unprecedented in 1,000 years,” NASA scientists report, threatening to breach the global temperature limits set in the Paris climate treaty that takes effect in November.

“In the last 30 years we’ve really moved into exceptional territory,” Gavin Schmidt, director of NASA’s Goddard Institute for Space Studies, told The Guardian in August – a month that tied July for the warmest ever recorded.

With temperatures on the rise and the concentration of carbon dioxide in the atmosphere moving permanently above 400 parts per million, climate change continues to demand national and international attention. President Obama told The New York Times that climate change trends are “terrifying,” and he recently signed a Presidential Memorandum requiring the federal government to consider climate change impacts a threat to national security.

To learn more about why the Earth is warming so fast, what research can be and is being done to adapt to climate change and mitigate its impacts, and learn more about opportunities for hope, we talked with Galen McKinley, a UW-Madison professor of atmospheric and oceanic sciences and Bryson Professor in the Nelson Institute Center for Climatic Research.

Why is the Earth warming at an unprecedented rate?

McKinley: Warming is due to human emissions of greenhouse gases, including carbon dioxide and methane (CO2 and CH4). These emissions are due to human fossil fuel use, cement manufacturing, land clearing and more.

Do you agree with NASA experts that it’s “very unlikely” that the planet can stay within a 1.5-degree Celsius temperature increase limit agreed to in the Paris climate accord?

Yes, I agree with this. Plots such as this one (below) from the National Oceanic and Atmospheric Administration (NOAA) indicate that it is quite possible that this year will be above 1 degree Celsius in excess of the 20th century mean. The climate system is not yet in equilibrium with the CO2 and CH4 already emitted, so continued warming is inevitable, even if we started making strong emission cuts right now. 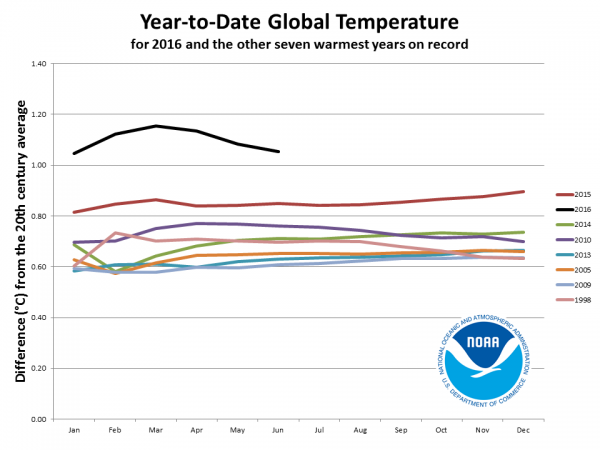 Year-by-year temperature difference (in Celcius) from the 20th century average. The chart shows the seven warmest years on record, including 2016.// Image: NOAA

President Obama has called climate change trends “terrifying.” Can you explain these trends and why they are such cause for alarm?

The trends are “terrifying” because our human society is built on the assumption of a stable climate.

We have built so many cities in the coastal zone and they are threatened by sea level rise and storm surge. We want to live in the desert Southwest and southern California where water supplies are naturally limited and our man-made supplies are dwindling. And we depend on now-dwindling snow packs and mountain glaciers in many other places for our drinking water. We depend on growing our crops in certain places.

All these systems are threatened by climate change and this is scary because it will disrupt the ways and places humans live. It is also yet another threat to many of the other beings with which we share this planet.

Climate change certainly doesn’t mean that all life on the planet will go away, but it will be very inconvenient as it reshapes our coastlines, environments and ecosystems over the coming hundreds to thousands of years.

What kinds of research are you doing that help us understand climate change?

I study the ocean and its ability to absorb carbon from the atmosphere. To date, 40 percent of all human CO2 emissions have been absorbed by the ocean. One might think of the ocean as a sponge that sops up part of our CO2 mess.

Has your research led to any surprising findings?

Recently we’ve been studying how much the climate system varies naturally across different components of the system, and across timescales. This variability can make it difficult to identify climate change trends in relatively short climate data records – even for such basic things as temperature and precipitation. In my lab, we are assessing when and where it will be possible to use data that goes back only to the 1980s to directly observe change in the ocean carbon sink.

Do you think there is hope in science and technology, or as these articles and reports tend to frame it, are we doomed?

Clean energy technology and energy efficiency are critical. We need to be able to produce most of our energy without producing CO2, and we should be as efficient as possible when we use energy.

But it is important to understand that even if we got very clean in terms of energy and cut emissions very quickly, we still have 30-40 years of climate change ahead of us. The things we do today will not have much effect in my lifetime – even if I live to be quite an old lady. Even my children will not see effects until after middle age.

But the effect our mitigation actions today will have on the lives of our grandchildren and further descendants can be expected to be enormous. As hard as it is for us to do politically, we have no choice but to take the very long view with the climate problem.