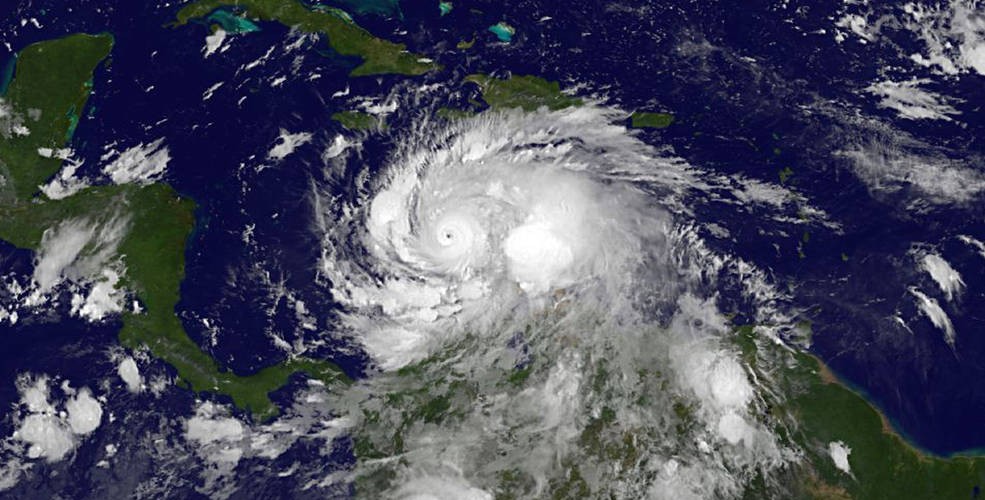 On Tuesday night (Oct. 4) an unmanned drone called Global Hawk will fly into Hurricane Matthew, a category 4 storm currently aiming for the Caribbean. Global Hawk is a high-altitude drone capable of flying long-range missions into and above storm systems to gather a wealth of data on wind speeds, moisture, pressure and temperature, which influence the storm’s potential track and ability to intensify. Global Hawk will provide valuable input to storm forecast models, aiding agencies like the National Weather Service. It should also help determine whether the powerful storm will impact the U.S..

Members of the UW-Madison Cooperative Institute for Meteorological and Satellite Studies Tropical Cyclone Team, including Chris Velden, Derrick Herndon and Sarah Griffin, are part of the effort to use Global Hawk to better understand hurricanes, including how they form, how they intensify, and where their paths will take them. The project they are part of is called SHOUT, for Sensing Hazards with Operational Unmanned Technology, from the National Oceanic and Atmospheric Administration (NOAA) in partnership with NASA.

Technically, the SHOUT mission ended last week, fulfilling its two-year (three-season) endeavor to assess the feasibility of using unmanned drones to study hurricanes. The Global Hawk had returned to Armstrong NASA facility in California after spending its mission time at Wallops NASA Flight Facility in Virginia.

“When we saw Matthew developing over a week ago, we started making plans to extend the mission to try and fly the storm,” says Herndon, a CIMSS scientist on the SHOUT and Tropical Cyclone Teams.

Now, Global Hawk will leave its base in California, fly across the southern U.S. into the Gulf of Mexico, and then travel north of the Bahamas to gather data where there is currently much uncertainty in Matthew’s forecast.

“The steering currents in that region will be critical for whether or not Mathew will impact the U.S. later this week,” says Herndon, who will depart Madison Monday for Wallops Island in support of the mission to Matthew. There will be another team in California, he says, and Velden, lead scientist on the Tropical Cyclone Team, will provide support from Madison.

There is a large spread of uncertainty about the storm’s predicted path that extends from the east coast of Florida east to north of the Bahamas and offshore the Carolinas, Herndon says. “There is also uncertainty in how much the land interaction with the higher mountains of Haiti and Cuba will effect the storm’s intensity and how much re-strengthening will occur when it moves back over the warm waters around the Bahamas. The environment looks very favorable for intensification in this area.”

Beyond five days, Herndon says the storm is expected to move northeast but the scientists do not know whether that will bring Matthew along the coast or whether the storm will stay offshore.

“The storm should grow larger in size as it expands some and this will produce dangerous rip currents and large waves on the southeast coast and perhaps farther up the east coast this week even if Matthew stays offshore,” he adds.  “The extended forecast grows even more uncertain, with some models showing it passing close to Bermuda while others take it into the northeast U.S. as a sort of Sandy-like hybrid storm (not fully tropical but also not fully frontal in nature).”