What’s more Wisconsin than milk and cheese? I’ll tell you: It’s snow. Fat, fluffy flakes silently piling up on windowsills and those bitter, piercing blizzards are as predictable as NFC North championships in Wisconsin.

But the cold, snowy conditions that are a staple of winter in Wisconsin and the Great Lakes region are on the decline. According to projections from climate scientists at the University of Wisconsin–Madison, by the end of the century our winters could change dramatically, eventually shrinking by up to two months.

“It will be a very different environment for the Great Lakes,” says Michael Notaro, a senior scientist and associate director of the Center for Climatic Research at the University of Wisconsin–Madison’s Nelson Institute for Environmental Studies. 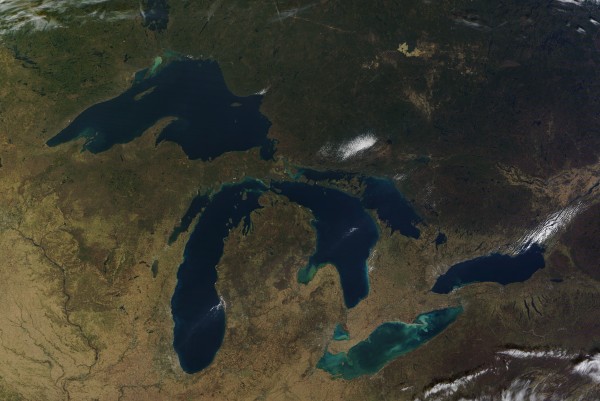 Notaro and his colleagues use computer programs to create models that simulate regional responses to climate change, and their results show a host of changes to Wisconsin’s winter patterns.

Wisconsin is projected to have fewer days with snow on the ground and warming temperatures will accelerate snowmelt. The fringe months of the cold season – October, November, April and May – could all see significant decreases in snowfall, essentially shortening the winter season and prolonging the “limbo” in between seasons.

Lake effect snowstorms are predicted to increase toward mid-century in the Great Lakes but decrease by century’s end. Lake Superior, which is in a colder environment than the other lakes, will sustain or even increase the frequency of lake effect snowstorms. But this, too, is projected to decline toward the end of the century.

Due to warming temperatures, Wisconsin’s winter precipitation will less often fall the form of snow; instead it will fall as rain.

The forces of change are visible after winter subsides, too. Heavy rain events that can dump two-to-three inches are projected to increase in southern Wisconsin, especially in Dane county. Flooding in Lake Delton in 2008 killed three people and caused $763 million in damages. It is just one example of the effects that extreme rain events can have, Notaro says.

The findings that these models generate are valuable to resource managers in the state, Notaro says.

“We [the Center for Climatic Research] largely develop climate change projection, and other groups use that to kind of get a sense of risk management and how they can change a lot of their policies and planning so that they can dampen some of the negative effects of climate change,” Notaro says. “We’ve done about 52 years of solid research in our center, so we have been a very productive research center here for quite a long time.”

The Great Lakes basin, home to over 30 million Americans and Canadians, houses 21 percent of the world’s fresh water supply. But, according to Notaro, the region is difficult to represent in climate models, which usually operate on a global or continental scale.

“The concern is that a lot of the global climate models, at least half of them, don’t even have the Great Lakes in them,” Notaro says. “The ones that do (include the Great Lakes) barely represent them, so it’s kind of an important issue where you need to use a regional model if you want to study Wisconsin, Michigan, New York and the states in that area.”

In order to investigate changes to the Great Lakes Basin, Notaro and his colleagues use a regional model called RegCM4, for Regional Climate Version 4, developed by the National Centre for Theoretical Physics in Italy. The model is able to produce resolution at a 20-25 kilometer scale, providing a high level of detail critical for detecting changes across smaller climate regions.

Global climate data, such as jet streams and cyclones, are entered into the regional model and act as a foundation for its operation. The model then runs over a time scale of the researcher’s choosing, using those larger-scale forces to calculate smaller-scale changes in regional climates. The end results explain how global climate change is affecting the Great Lakes.

“So in other words, how is the large scale wind field and temperature, how is that going to change the Great Lakes Basin, the Great Lakes lake effect snow, that’s something that you need a regional model to study,” Notaro says. “It’s a more complicated process.”