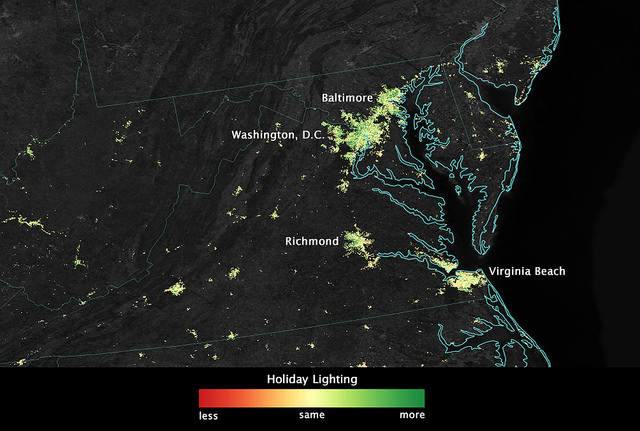 According to an article in Live Science, on a clear night, the human eye can see a candle flickering 30 miles away. It’s a dubious claim (it’s not cited or attributed, and to see or not to see is a somewhat complicated matter), but we do know this: NASA can see your holiday lights from space. 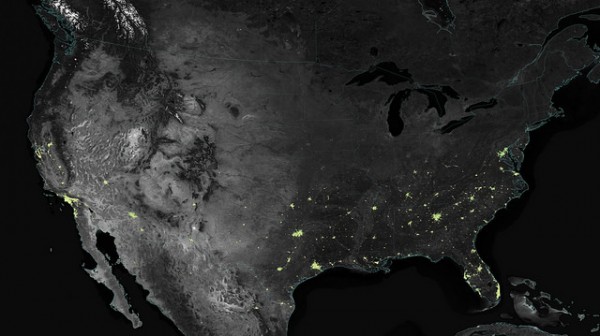 City lights shine brighter during the holidays in the United States when compared with the rest of the year.
Because snow reflects so much light, the researchers could only analyze snow-free cities. They focused on the U.S. West Coast from San Francisco and Los Angeles, and cities south of a rough imaginary line from St. Louis to Washington, D.C.
Credit: Jesse Allen, NASA’s Earth Observatory

It was an incidental finding from data gathered by the Suomi National Polar-orbiting Partnership (Suomi NPP) satellite. That’s Suomi, like University of Wisconsin-Madison Space Science and Engineering Center (SSEC) founder, Verner Suomi, who according to NASA “pioneered remote sensing of Earth from satellites in polar orbits a few hundred miles above the surface with Explorer 7 in 1959.”

In early 2012, the satellite – designed to collect better weather forecasting data and increase our understanding of long-term climate change – was renamed by NASA for Suomi, who invented the spin-scan camera that took the first satellite images of Earth’s weather, much like the continuous loops we see on TV and online today. 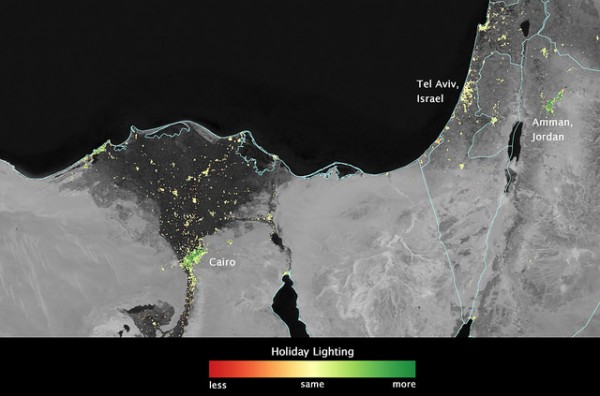 In several cities in the Middle East, city lights brighten during the Muslim holy month of Ramadan, as seen using a new analysis of daily data from the NASA-NOAA Suomi NPP satellite. Dark green pixels are areas where the lights are 50 percent brighter, or more, during Ramadan
Credit: Jesse Allen, NASA’s Earth Observatory

To get these images, researchers at NASA’s Goddard Space Flight Center and Yale University were looking at data to measure light output around the planet (to examine global energy consumption), using a new algorithm that filters out light from the moon, clouds and particulate matter in the atmosphere. They noticed a “discrepancy” in the 2012 data from over Cairo and parts of the Middle East, where many people observe the month-long Muslim holy month of Ramadan. During Ramadan, people fast during the day and stay up late eating and gathering together.

The researchers took a closer look at the data and realized the nighttime lights corresponded to these times, the shifting months of Ramadan, where lights shine 50% brighter than at other times of the year. They realized holiday lights were leaving a unique fingerprint. Turning to data from the U.S., they found lights are 20-50% brighter during the stretch between Black Friday and New Years. (Northern cities were excluded from the analysis, since the algorithm does not filter out snow cover.) 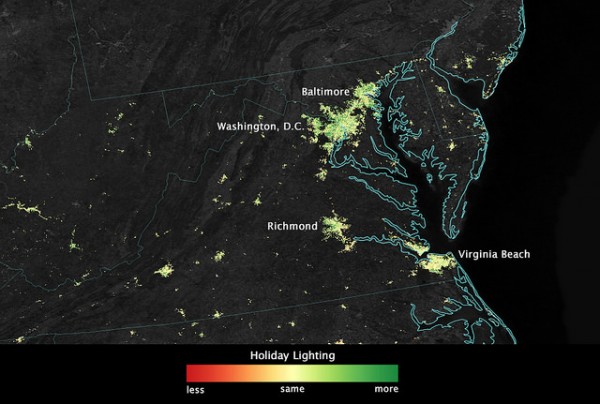 City lights shine brighter during the holidays in the United States when compared with the rest of the year. Because snow reflects so much light, the researchers could only analyze snow-free cities. They focused on the U.S. West Coast from San Francisco and Los Angeles, and cities south of a rough imaginary line from St. Louis to Washington, D.C. Credit: Jesse Allen, NASA’s Earth Observatory

On Suomi NPP is an instrument called the Visible Infrared Imaging Radiometer Suite, or VIIRS, which captures the lights emanating from dark parts of the globe. It also records high altitude cloud motions; it was Suomi who first figured out how to use winds to improve weather forecasting. Also on the satellite is the Cross-track Infrared Sounder (CrIS) to record temperature and water vapor. Suomi set the stage for this technology in 1980 and SSEC is responsible for more of the development of CrIS.

Observing holiday lights from space may not have been exactly what Suomi had in mind when he invented the first camera to take images from geosynchronous orbit, but surely the pioneer could get in the spirit. Looking at the holiday light-use pattern, was, after all, one of the first analyses from the new daily lights algorithm, NASA says.

In a statement, NASA Jenkins Graduate Fellow and Ph.D. candidate at Yale University’s School of Forestry and Environmental Studies, Eleanor Stokes (co-leader of the analysis with Miguel Román, a research physical scientist at NASA Goddard and member of the Suomi NPP Land Discipline Team) says: “Having a daily global dynamic dataset of nighttime lights is a new way for researchers to understand the broad societal forces impacting energy decisions.”