David Archer, an expert on the global carbon cycle and its relation to global climate, will deliver the 7th Annual Len Robock Lecture March 3 at the University of Wisconsin-Madison. 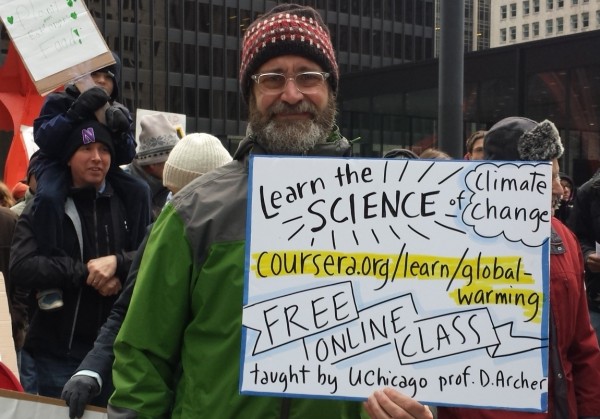 A professor in the Department of Geophysical Sciences at the University of Chicago, Archer is a leading researcher on the balance between carbon dioxide levels in the atmosphere and oceans and the connection to fossil fuel emissions.

Fossil fuels have been in use for hundreds of years: An increasingly industrialized society escalated the demand for energy, opening the door for fossil fuels to become the major energy source.

But, according to Archer, it comes at a price. He says the climate impacts — warmer temperatures and sea level rise — of carbon dioxide emitted into the atmosphere when fossil fuels are burned, will remain long after we stop burning them, if we decide to stop burning them.

The natural reabsorption of carbon dioxide into the Earth, to try to return it to a state of equilibrium, is a slow, complex process. In addition, says Archer, the timing and intensity of the climate impacts depends on the natural carbon dioxide concentration in the atmosphere at the time fossil fuel energy was discovered.

Archer says that if the natural concentration of carbon dioxide had been a factor of two or more lower, the climate impacts of fossil fuel emissions would have occurred about 50 or more years earlier. Given the limits of scientific knowledge a century ago, there would have been significant challenges for society to understand the enormity of the anthropogenic climate change phenomenon in time to prevent it.

An elected Fellow of the American Geophysical Union, David Archer is the author of several books on climate change including Global Warming: Understanding the Forecast, The Warming Papers, The Global Carbon Cycle, The Long Thaw: How Humans are Changing the Next 100,000 Years of  Earth’s Climate, and The Climate Crisis. He is a regular contributor to RealClimate, a climate science blog written by climate scientists for journalists and the public.

Free and open to the public, the lecture takes place Thursday, March 3, at 7 p.m. in Room AB20 of Weeks Hall. For more information, check the event website.

The lecture is made possible through the Leonard Robock Endowment to the UW-Madison Department of Atmospheric and Oceanic Sciences.