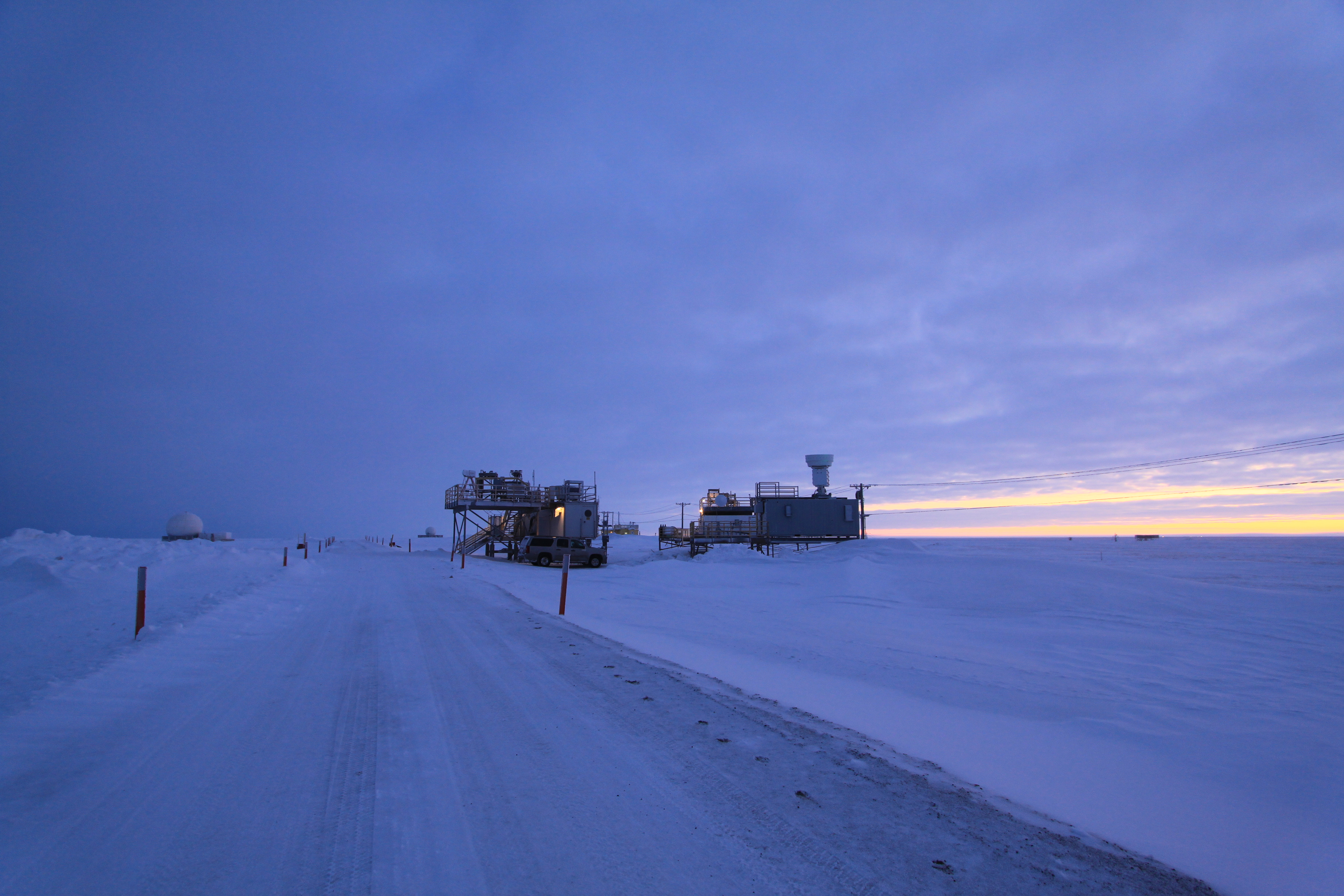 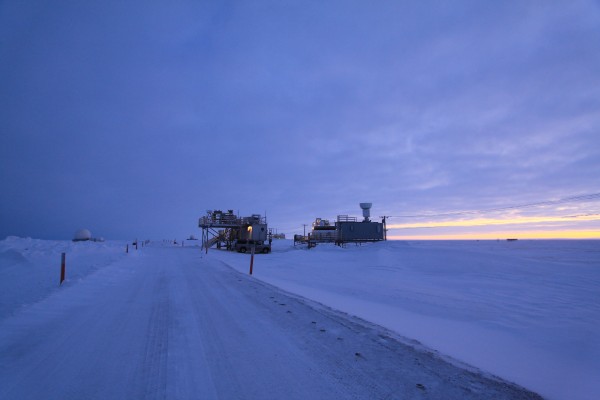 AERI installation on the North Slope of Alaska//Photo by Jonathan Gero.

Field observations from the Atmospheric Emitted Radiance Interferometer (AERI) – a ground-based, spectroscopic instrument designed at the University of Wisconsin-Madison Space Science and Engineering Center (SSEC) – are central to a new study that shows for the first time what laboratory studies have long suggested: carbon dioxide (CO2) in the atmosphere can affect Earth’s energy balance, impacting whether the planet gets warmer or colder.

And right now, some areas are getting warmer.

Jonathan Gero, principal investigator for the AERI program at SSEC and co-investigator of the study, published today in Nature, collaborated with scientists from the U.S. Department of Energy Lawrence Berkeley National Laboratory (LBL) to analyze AERI observations at two Department of Energy field sites between 2000 and 2010: one in Oklahoma and one on the North Slope of Alaska. They found that more energy – in the form of heat – is being trapped by the greenhouse gas.

The researchers attribute this upward trend to rising CO2 levels in the atmosphere from fossil fuel emissions, fires and other human-related sources. Over the course of the study period, atmospheric CO2 rose by 22 parts-per-million.

Earth’s energy balance – the driver of global weather and climate –  reflects the difference between the solar radiation entering the atmosphere from the sun and the infrared radiation reflecting back out. Heat coming in, heat going out. When there is a sustained imbalance between incoming and outgoing energy, the Earth can get warmer or colder – an effect known as radiative forcing. Positive forcing signals warming and data analysis from the two independent study sites indicated the same trend: Atmospheric CO2 was responsible for a significant increase in radiative forcing.

The influence of atmospheric CO2 on Earth’s energy balance was already well-established from laboratory studies but had not been experimentally confirmed in the field until now. The 11-year study specifically measured the ability of CO2 to trap energy near the planet’s surface, and thus, its contributions to radiative forcing. This is known as the greenhouse effect. 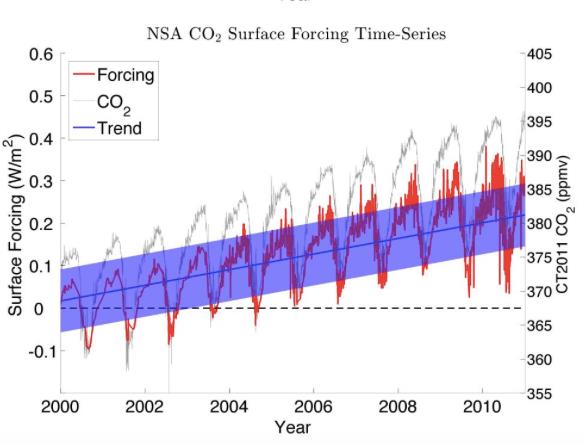 NSA CO2 surface forcing time-series showing: (1) the similarity between the red curve (greenhouse effect) and grey curve (CO2 concentration), and (2) the blue shading is the uncertainty in the trend. After 11 years the trend is statistically significant. Credit: Daniel Feldman, Lawrence Berkeley National Laboratory, courtesy of SSEC.

“We were able to isolate the distinct fingerprint of CO2 within the AERI spectrum and use that in our study,” says Gero. “We know CO2 concentration has been increasing, but these results link the increase in surface CO2 to the greenhouse effect for the first time.”

The rise in CO2-attributed radiative forcing was further linked to human activity in the form of fossil fuel burning and fires based on analysis of data from the National Oceanic and Atmospheric Administration’s Carbon Tracker – a global CO2 measurement system developed to monitor increases and decreases of carbon dioxide in the atmosphere.

The study also showed the influence of photosynthesis on the energy balance at Earth’s surface, Gero says. Radiative forcing over the study period followed the same seasonal cycles related to periods of robust plant carbon dioxide intake – when plants are green and photosynthesizing – and CO2 release in the Fall and winter.

These graphs show carbon dioxide’s increasing greenhouse effect at two locations on the Earth’s surface. The first graph shows CO2 radiative forcing measurements obtained at a research facility in Oklahoma. As the atmospheric concentration of CO2 (blue) increased from 2000 to the end of 2010, so did surface radiative forcing due to CO2 (orange), and both quantities have upward trends. This means the Earth absorbed more energy from solar radiation than it emitted as heat back to space. The seasonal fluctuations are caused by plant-based photosynthetic activity. The second graph shows similar upward trends at a research facility on the North Slope of Alaska. (Credit: Berkeley Lab)

The AERI instrument was rigorously designed by a team of scientists and engineers at SSEC in the early 1990s, with accuracy as its hallmark. In fact, according to Gero, AERI is “the most accurate, robust instrument of its kind.” For the current study, AERI provided more than 10,000 atmospheric measurements.

“We must collect a highly accurate long-term record of observations,” says Gero. “These are the conditions needed to draw conclusions about the Earth’s climate.”

The instrument precisely measures the thermal energy arriving at the Earth’s surface – in the infrared part of the spectrum – through remote sensing. These AERI spectral measurements are sensitive to many different components of the atmosphere, like atmospheric gases, aerosols, clouds, water vapor, and temperature.

Now installed at locations worldwide, each site contributes to the AERI data set that spans 20 years and continues to grow. Because of its decades-long history and proven accuracy, AERI is routinely used to validate and calibrate data from NASA and NOAA satellites. 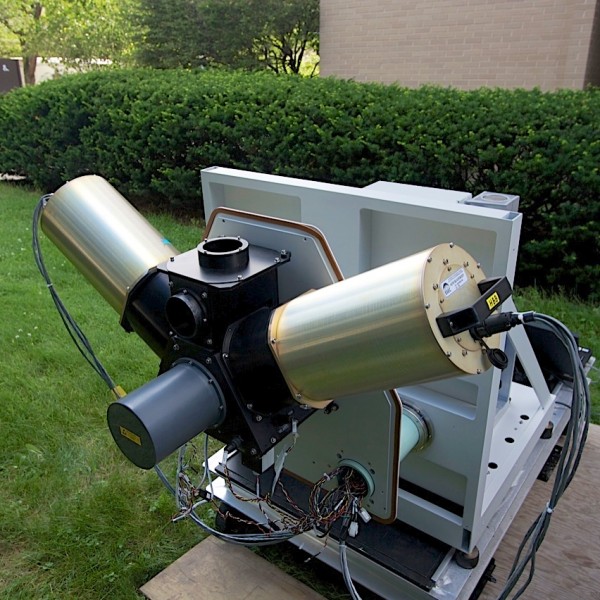 The AERI Instrument//Photo from SSEC

More on SSEC and AERI:

SSEC’s work in the climate arena is not new. It dates back to 1959 when SSEC founder Verner Suomi conducted an experiment from a satellite platform to monitor the global energy budget. He set an early benchmark for analyzing the influence of human and naturally occurring processes on the Earth’s energy budget.

The AERI continues and extends a legacy of instrument development, and weather and climate research at SSEC. Looking to the future, says Gero, “there is ongoing research to deploy this measurement technique on satellite platforms so that we can make these types of measurements for the planet as a whole.”