The following is from Kaine Korzekwa, science writer and marketing specialist in the Department of Biochemistry:

Think of the cellular machine known as the spliceosome as being like a car. For a car to function properly, its parts have to be assembled in a particular order. Additionally, many of the car’s parts have to also be put together before they can be put in the car, making up an increasingly complex system of assembly that must be tightly regulated to ensure it is done correctly.

In the case of the spliceosome, errors don’t result in recalls but instead in a lack of the proteins humans need to survive or stay healthy. The spliceosome is responsible for taking RNA — which gets its information from our DNA — and cutting, or splicing, out the sections needed to make proteins. This splicing action gives the cellular machine its name.

The assembly kit for the spliceosome comes in the form of six subunits, and scientists in the University of Wisconsin–Madison Department of Biochemistry carefully study how these subunits form and interact. In a Nature Communications paper published September 8, 2017, they reveal how one of the most crucial subunits is put together. 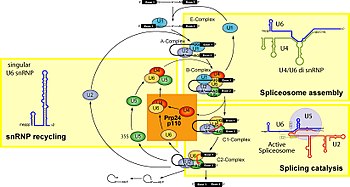 The complex assembly of the spliceosome, a cellular machine involved in creating proteins. Source: Wikipedia

The researchers say understanding the normal function and assembly of the spliceosome is the first step in understanding diseases cause by errors in the spliceosome, such as a rare genetic disease that causes skin and bone problems. Their findings also provide interesting insights into the evolutionary history of organisms as diverse as yeast and humans.

The U6 snRNP (pronounced “U6 snurp”) is a spliceosome subunit that the cell must synthesize and assemble. U6 RNA is a part of this subunit and is processed by a protein enzyme called Usb1. Researchers have solved the structure of Usb1 and discovered how the enzyme interacts with the U6 RNA to catalyze the assembly of the U6 snRNP subunit. This ultimately affects the spliceosome, which is essential for gene expression, because the U6 RNA is the active site of the cellular machine that powers its splicing capabilities.

The researchers studied Usb1 and its activities both in yeast and in humans. Spliceosomes are only found in eukaryotes, a biological classification that includes organisms like humans, plants, and fungi like yeast — but not bacteria, which are prokaryotes. Comparing the assembly process of the U6 subunit in yeast and humans, the researchers found a key difference.

In both yeast and humans, Usb1 processes the U6 RNA. The human enzyme modifies the U6 RNA by performing one reaction and leaving what is called a cyclic phosphate — a ring of atoms made out of carbon, oxygen, and most notably a phosphate.

The yeast however, goes a step further to open that ring to leave a different product on the RNA. Additionally, although the yeast and human versions of the enzymes perform different reactions, their structures are very similar, which surprised the researchers.

“This is an example at the molecular level where you have an enzyme that was present a long, long time ago and could perform this one reaction and then evolution diverged,” says biochemistry professor Samuel Butcher, a senior author of the study. “Other components of the spliceosome have evolved to work with this difference.”

The difference is subtle but has big implications for the spliceosome. The chemistry of what’s left behind by the yeast enzyme is pretty stable. It results in just one nucleotide of the RNA being chopped off. However, the cyclic phosphate left behind in humans allows the enzyme to continue chopping off nucleotides over and over.

“Think of it like Pac-Man just chomping away at the human RNA,” Butcher says. “However, humans have a way to extend the RNA to create a dynamic equilibrium between chewing the RNA back and extending it.” 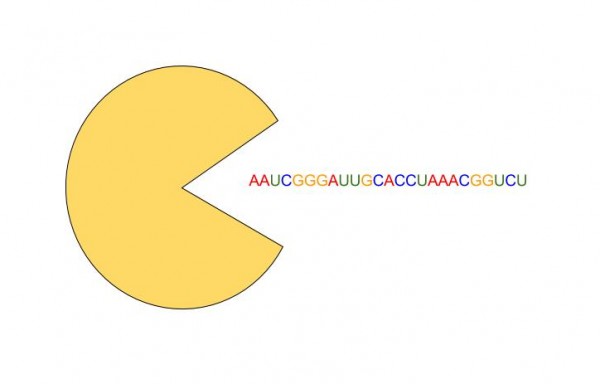 Think of the enzyme Usb1 like Pac-Man, “just chomping away at the human [U6] RNA,” says Sam Butcher, author of a Nature Communications study examining how the enzyme helps build the spliceosome, a critical cellular machine involved in the production of proteins.

How exactly this process is advantageous to humans is an evolutionary mystery. Graduate student Allison Didychuk, the lead author on the paper, says the increased complexity could allow the cell finer regulation of some of these steps.

“When you have more steps of processing, it can mean there are just more checkpoints for the cell,” she says. “An additional checkpoint at this point in the synthesis of the U6 RNA can ensure that the full length is incorporated into the spliceosome because if it’s shorter or longer, the next proteins in the sequence can’t bind as well. Such a checkpoint would also allow you to degrade RNA that didn’t meet these standards. Splicing has to be hyper-accurate so having a perfect U6 is essential, hence you have these checkpoints at each step.”

Along with Butcher and Didychuk, the laboratories of Biochemistry Assistant Professor Aaron Hoskins and Professor David Brow of the Department of Biomolecular Chemistry helped in this research. These three laboratories frequently collaborate on work with the spliceosome.

The researchers were also able to determine the order in which a myriad of proteins assemble to form the U6 snRNP after Usb1 carries out its activities. Knowledge of how this assembly occurs is another avenue to understanding disease.

“You can’t just slap an automobile together — you have to put it together in a certain order,” Butcher explains. “So, we found the order of molecular events that are required. Going back to the understanding of diseases, we won’t understand the molecular basis of disease without understanding all of the steps in the right order that have to happen in a cell in order to be healthy. We need to have these kind of road maps first.”