In a sense, kinases are like cellular spark plugs, says Kaine Korzekwa, a science writer for the UW–Madison biochemistry department. They help kick-start complex cellular machines, like the ones that decipher genome to transcribe RNA from DNA. But in another sense, he says, they’re like electrical relays, transferring signals from one cellular molecule to another.

Korzekwa recently wrote about an important new study of kinases from the lab of Aseem Ansari, a professor in the Department of Biochemistry, which describes a new tool for studying these information-relay, spark-plug-like cellular molecules:

Kinases play a large role in many cellular processes, so when things go wrong in their inner workings, real health issues arise. Genetic mutations that cause kinases to malfunction can lead to different forms of cancer and other diseases. Understanding the functions of different kinases is the first step to exploring research into possible treatments.

By building on past research, Ansari and his team have developed a method to irreversibly inactivate a specific kinase, opening the doors for them and others to learn about their individual functions.

“It’s always been interesting to study kinases because they are one of the most popular drug targets in the pantheon of processes that drug companies focus on,” says Ansari. “Kinases have been highly ranked in terms of potential targets for therapeutics and it is in this context that the irreversible nature of this new strategy is very important. We can now actually perturb the process in the environment of the living cell.”

The team published its findings in the journal Molecular Cell.

“Having this system where just at the snap of your finger you can shut down the kinase and immediately look at the effects is really powerful,” says Sandra Tseng, a graduate student in Ansari’s lab and co-first author on the paper. “It reduces the number of interferences from other processes going on in the cell that try to compensate and allows us to study the kinase’s function very precisely.”

Kinases work through a process called phosphorylation, which uses adenosine triphosphate (ATP), the energy currency of the cell. The method the group devised revolves around genetically mutating the kinase in order to sensitize it to a chemical. An earlier method used one mutation, which caused a small hole or “cavity” to form where a bulky ATP-mimic could bind instead of ATP, thereby reversibly inhibiting the kinase by preventing its contact with the ATP in the cell. 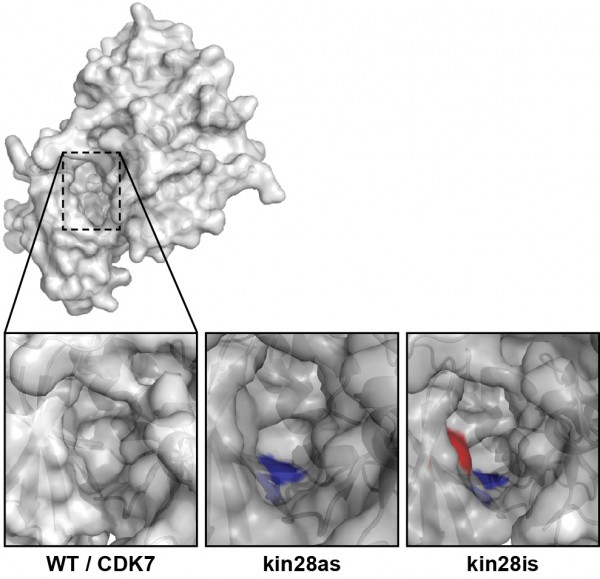 Left: normal (“wild-type”) kinase; middle: kinase with the mutation from the reversible process; right: kinase with two mutations used in the new irreversible method deployed by the Ansari Lab. The red mark serves as the “superglue” that makes the inhibition irreversible//Credit: Ansari Lab

“This method wasn’t that effective because scientists found that it is actually reversible,” says Tseng. “We like to say that ‘life finds a way’ and somehow the cells were recovering and kept growing even when we tried to inhibit a kinase that is essential for life.”

By adding a second mutation, the team created a kinase susceptible to a chemical called CMK, which covalently binds to the kinase — staying put permanently. Ansari explains that the first mutation caused the kinase to bind like a hand in a glove but the glove could come off, so this second new mutation is like adding superglue to the inside of the glove. Essentially, the CMK binds irreversibly and “starves” the kinase of its power source, ATP.

The approach allows researchers to take what amounts to a rapid series of snapshots of the kinase as it goes about its business in a cell, leading to an understanding of the roles it plays.

“As a generalizable tool, it takes a step beyond the reversible method and the caveats that may have,” says Juan Rodriguez-Molina, another co-author of the study and a former Ansari lab member. Originally from Puerto Rico, Rodriguez-Molina is now a postdoc at the Babraham Institute in Cambridge, UK. “It’s like a shortcut. You can redesign a kinase that you’re interested in, in a cancer cell for example, and home in on interesting ones by specifically disrupting their activity. While we focused on one kinase, the technique can be used for almost any of them.”

There has been a long-standing controversy about the role of certain kinases in the transcription of DNA into RNA (which leads to the creation of proteins, the workhorses of cells). The researchers found that the specific kinase they examined — called Kin28/Cdk7 — is absolutely essential for the production of RNA. This important finding eluded other scientists who were unable to irreversibly inhibit the kinase with previous methods.

“We’re talking about a basic mechanism that is present in yeast and every animal that humans have ever studied, including ourselves,” Rodriguez-Molina says. “Transcription is a very complex process where numerous proteins are recruited to make changes to RNA as it is being made. Understanding the role of these kinases is extremely important to learn more about their function in the expression of genes essential for life.”