Home » Biology » How to make an open-source, computerized map of the brain

This post was contributed by Mason Muerhoff, who is the Associate University Relations Specialist for the Waisman Center.

In search of a way to improve how scientists analyze brain images, researchers at the University of Wisconsin–Madison Waisman Center decided to build a brain.

Or at least, a brain model.

The map, Converse says, offers a tool for comparison for the positron emission tomography (PET) scans that he conducts in his research. Scientists use PET scans to reveal how organs and tissues in a subject are functioning.

“I’m really interested in how the whole brain works, and how it relates to behavior,” Converse says, and so far, he has used the new tool to pinpoint regions in the brain where specific activity is recorded during PET scans.

“It’s just so cool that with PET we can do this dynamic modeling and watch these radiotracers that have really exquisite biochemical specificity,” says Converse, referring to the slightly radioactive materials that the PET scanners track.

The new tool has both geographical and functional uses, Converse says, depending on how it’s employed. But it may also provide insights into the functional connectivity of the brain, enabling researchers to investigate how rhesus neurochemistry interacts with brain activity visible by functional MRI (fMRI).

Rhesus brains are approximately 15 times smaller than human brains, Converse says, but “the lay of the land is similar, so these different regions that we are interested in have a lot of homologues between the two species.”

The atlas is composed of regions of interest that have already been widely studied, Converse says, and he and his colleagues – hailing from Canada, Germany, and the Netherlands – made their National Institutes of Health-funded study data open source; the set of 200 brain regions is available for anyone to download.

The map was created using an existing set of digital slices of rhesus brains used by a wide variety of researchers and considered to be the gold standard anatomical reference. That set, called the Paxinos atlas, used 45 micron-thick slices – smaller than the width of a human hair – of the entire rhesus brain at half-millimeter intervals to develop digital versions of each slice.

Jeff Moirano, a graduate student in medical physics and lead author of the study, combined this highly-detailed anatomical Paxinos atlas with an MRI template. The template was created by Donald McLaren, who at the time was a graduate student in the lab of Sterling Johnson, Waisman Center affiliate and professor in the department of medicine. It combined 112 rhesus MRIs.

Moirano placed the slices one after another from front to back in a computer program, smoothed out any misalignments between neighboring slices, and used special algorithms to fill in any gaps that were left in the program.

The team used both qualitative and quantitative methods to measure the accuracy of the 3D map. Comparisons from the map to hand-drawn atlas sketches showed that the regions aligned well. Quantitatively, Converse tested the atlas against MRI and PET source datasets, again showing good alignment. 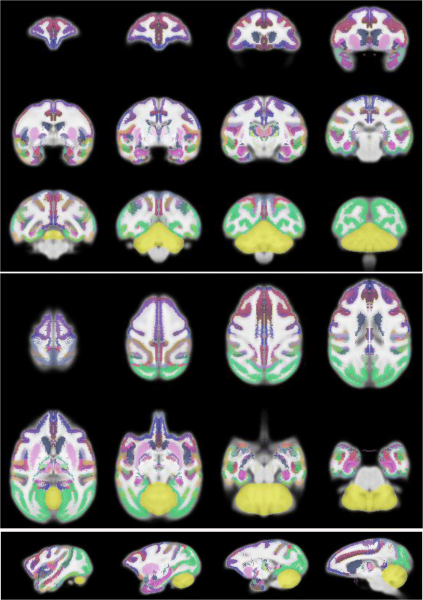 These colorized images of the brain reveal each individual region.

“This beautiful picture, this map with these multi-colored regions lined up with the right parts of the MRI,” says Converse. “Once you’ve got this 3D object, and you’re happy with it, then in the computer you can slice it any way you want.”