In July of 2018, a stalwart tree that had towered over the University of Wisconsin–Madison campus for generations and provided shade and residence for countless organisms was cut down. The American elm was one of the many long-standing elms in the U.S. to succumb to Dutch elm disease. Despite great efforts over the last two decades to prune and maintain the old elm, the disease soon spread to most of the immense tree.

A kingpin of horticultural studies, “Elmer” maintained a strong presence in the College of Agricultural and Life Sciences. Not only were students provided with great swaths of shade in their hot summer journeys across campus, but many biochemistry and horticulture students used the vast history of the tree as a point of study in their courses. Elmer’s cultural role on campus was outlined in a recent eulogy on the biochemistry department’s website.

Researchers at UW–Madison have often used elm trees in horticultural studies, and Elmer provided a snapshot of genetic history. Johanne Brunet, a USDA-ARS evolutionary biologist and professor in the Department of Entomology, has researched elm trees and their hybrid species.

“Elmer was a cherished tree and a relic of the majesty of the American elm over urban landscapes,” says Brunet. “Although our work did not directly examine the American elm, it was guided by its story.” 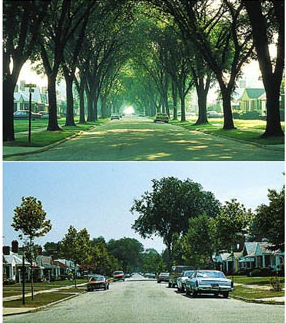 The decline of the American elm is the unfortunate result of the introduction to the U.S. of Dutch elm disease, which originated in Asia and was accidentally introduced to the U.S. by means of infected timber that was meant for furniture production in Ohio. It was first described by Dutch pathologists, hence the name.

Elm populations have continued to decline as the disease proliferated following its introduction in the early 1930s. By 1989, it was estimated that over 75 percent of the American elm population had been lost.

The disease is caused by a fungus that infects the trees and whose spores are spread by bark beetles. These beetles burrow into the bark of elm trees, which makes them difficult to locate once they’ve settled on a tree.

Elm trees, once infected, plug their own vascular tissue, known as xylem, to prevent further spread. The xylem is key for delivering nutrients and water throughout the tree, and this blockage eventually starves the tree and kills it.

Hailed for their fast growth and hardiness in low-quality soil, like that near city streets, American elms were once common along neighborhood roads. Their cathedral-like, splayed branches create a shady canopy for those underneath. 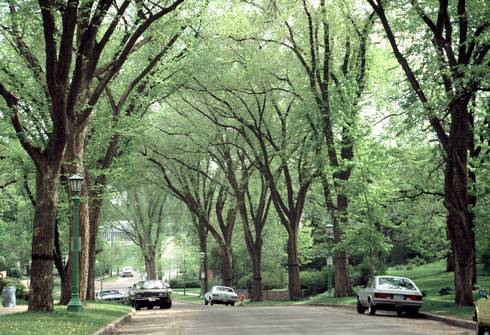 Disease containment remains an ongoing effort in the U.S., and several types of preventative treatments exist. Prominent trees, like Elmer, are heavily pruned to remove and burn the diseased branches. Chemical fungicides can also be injected into the trees, with varying levels of success. Unfortunately, none of these treatments truly eradicate the disease once it is introduced to the tree.

Not all hope for elms is lost, however. Research into disease-resistant hybrid trees has a long history at UW–Madison. The late Professor Eugene Smalley developed various strains of disease-resistant elm, notably the Sapporo Autumn Gold, New Horizon, and American Liberty varieties.

Sapporo Autumn Gold was developed using Asian hybrid cultivars, and has become one of the most successful hybrid cultivars. The strain was sent to Smalley by researchers at Hokkaido University in Sapporo. 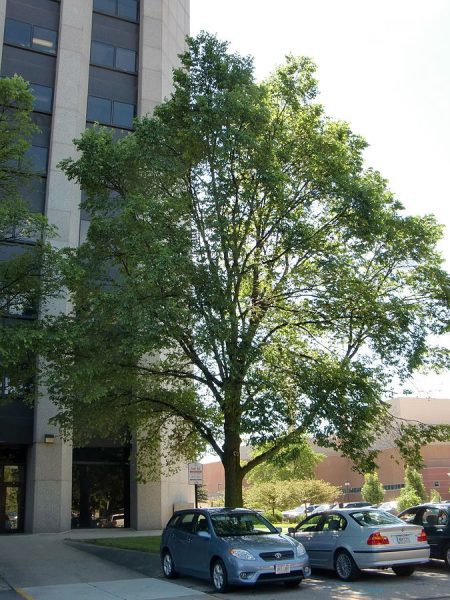 New Horizon elms have dense foliage and a pyramidal shape, contributing to their unique appearance from other elm species. Photo by Wikimedia Commons.

New Horizon (left) is currently grown outside the Wisconsin Alumni Research Foundation, and is a cross between Japanese and Siberian elms. An upright and slow-growing tree, New Horizon has a distinct appearance from the classic splaying branches of the American elm.

American Liberty has been used in a variety of street-side planting and has found limited success. Smalley described the strain as “not as resistant as the Asian hybrids, but it still has the look of a classic American Elm.”

To replace American elm, an Asian elm species with some resistance to Dutch elm disease, Siberian elm, was planted over the landscape. In Brunet’s research on elm tree hybridization, they found that negative effects resulted from crosses between this introduced Asian elm species and our native slippery or red elm species.

“The issue is that the Asian trees cross with our local red elm species and create hybrids, and these hybrids cross back to the Siberian elms more often than to the native elm, which over time eliminates the native elm genes,” says Brunet. “If this process continues, it could result in the disappearance of the native elm species.”

The elm hybridization work was started by Juan Zalapa, then a postdoctoral associate in the Brunet and Guries laboratories. Raymond Guries, Emeritus Professor of Forestry and Wildlife Ecology, recently retired and was the university’s last dedicated elm breeder. But Brunet says that there is currently a national effort to encourage more people to join the field of plant breeding.

Advancements from researchers at UW–Madison have ensured the proliferation of elm trees for generations to come. While we may not see a direct replacement of Elmer the elm tree for some time, we can remember that with it as an inspiration, generations of elm trees will live on for decades.