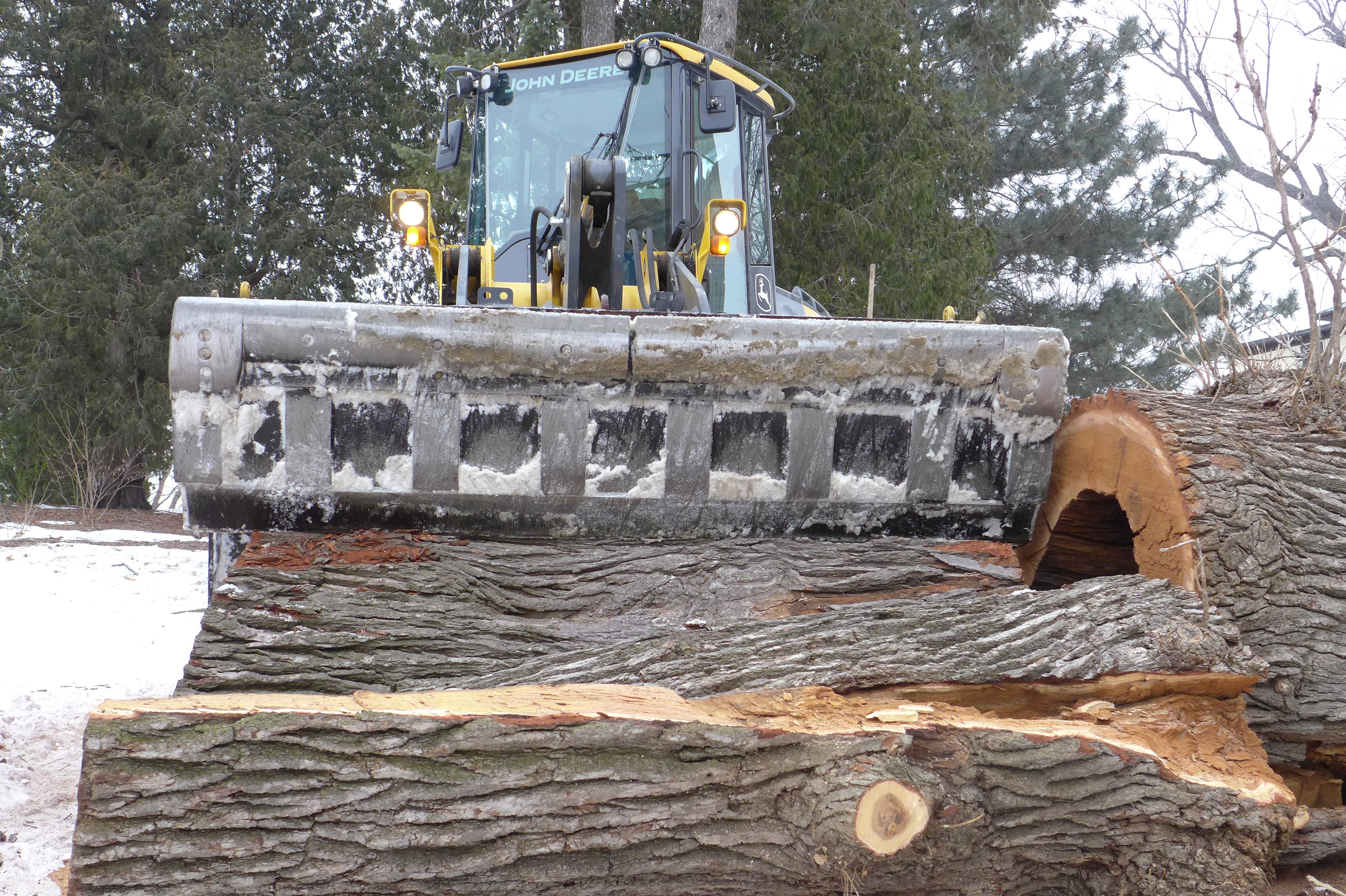 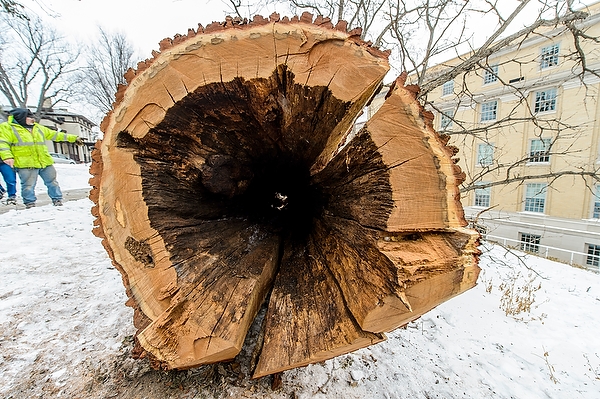 Looking inside the hollow of the President’s Oak//Photo by Bryce Richter, UW-Madison

Thump a solid oak, and you might hear a hollow resonance. That was certainly true for anybody who thumped hard enough on the President’s Oak, an ancient bur oak that was sawn down on Observatory Hill on Jan. 14 (read the obit here).

Urban foresters are used to these hollow insides, and you may have seen it too: Once a “perfectly solid” tree falls, we see a hollow hulk enclosing a rotted-out cavity. Sure enough, the President’s Oak was almost all gone – devoured over the centuries by fungi that entered through a wound and converted the solid oak wood into fungi food and dust. 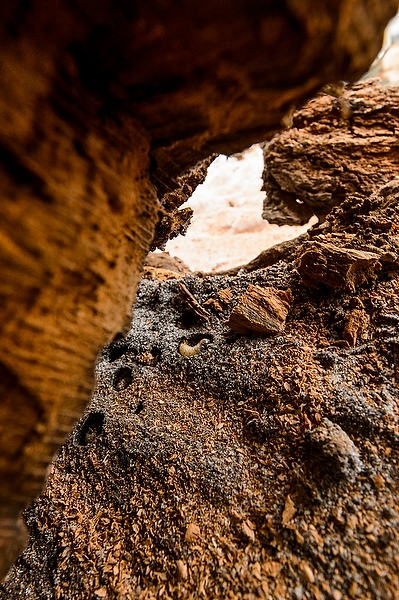 “Fungi food and dust” inside the President’s Oak/Photo by Bryce Richter, UW-Madison

As people from across campus mourn a tree that might have been 300 years old, making it the oldest tree on campus, staff from Facilities Planning and Management call the cutting a necessary but reluctant decision.

“Not one of us wanted to do this,” says Daniel Einstein, historic and cultural resources manager at FPM, “but this tree was hollow, weak, and near the end of its life. The trunk was cracked, and it was located alongside a path near Washburn Observatory.”

We asked Glen Stanosz, a professor of forest and wildlife ecology, to explain this pattern of rotting from inside, and he told us, “Most decay begins after a wound exposes the wood to spores of decay fungi, which are ubiquitous in the air.”

As the spores sprout the thread-like cells, or hyphae, that enable the fungus to start digesting the wood, “The last annual ring that is present when the wound is infected starts to change morphologically, chemically, and becomes a barrier zone,” Stanosz says. 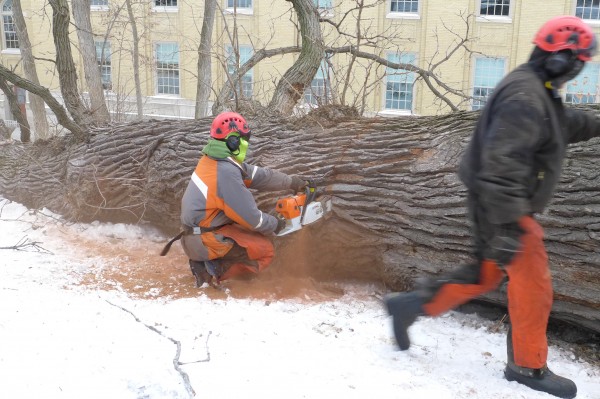 Trees, no dummies, produce anti-fungals. But since old wood is less chemically active and is inside the barrier zone, it’s not protected.

Although the rate and extent of the decay will depend on the species and environmental conditions, “if a tree is wounded, all of the tree that has grown up to that time, everything inside that barrier zone, is subject to progressive decay,” Stanosz says.

The decay expands, he adds, as the fungus grows inward and up and down through the existing wood, “and as the tree adds a new ring of protected, sound wood each year, the result is a hollow tree.” 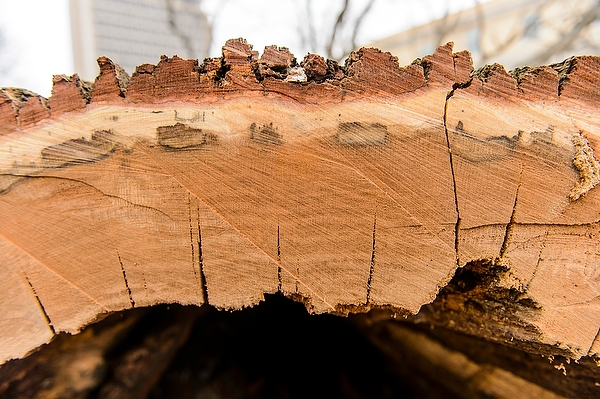 “We call this ‘compartmentalization of decay,’ and it allows the tree to continue producing new wood,” Stanosz says. Although this internal defense mechanism did allow the massive decay in the heartwood seen in the President’s Oak, “It’s a unique defense mechanism,” Stanosz says. “If we could compartmentalize, with cancer or a wound that was infected, we would be in good shape, but we can’t.”

But, he adds, “a tree can close a wound, but it can’t heal it, and so compartmentalization is a pretty good strategy to stay alive.”

This ability to change structure and chemistry to block decay fungi “is miraculous,” Stanosz says. “Nature never fails to impress.” 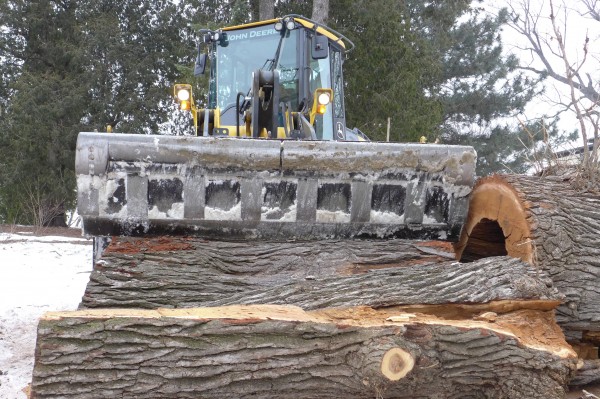 One thought on “President’s Oak follows time-tested pattern: rotted from the inside”