Home » Botany » Why do leaves change color in the fall?

Each year, as August fades into September here in southern Wisconsin, it always seems to take me by surprise to see the bright greens of spring and summer subtly transition to the goldens and burgundys of autumn. The trees and prairies slowly changing their attire. “But isn’t it too soon?” I think to myself. Not that I am hesitant to see the start of fall, a season I embrace in all its cool-weather, crisp-air glory (and no, it’s definitely not because of #PSL). But it always seems like the days are too long, the air temperatures still too high, when I first observe the telltale signs of autumn. Yet I know that leaves respond to a number of different cues in making their transition, which I learned about in large part thanks to this story, from the website of the award-winning UW–Madison Chemistry Professor, Bassam Shakhashiri, that we shared here first last fall. It’s called Learn About … The Chemistry of Autumn Colors  and in addition to the chemistry of leaf color, you’ll also learn how the colors of leaves are determined and why they aren’t always the same from year-to-year:

Every autumn across the Northern Hemisphere, the lengthening nights and falling temperatures induce trees to prepare for winter. In these preparations, they shed billions of tons of leaves. In certain regions, the shedding of leaves is preceded by a spectacular color show. Formerly green leaves, depending on the species, may turn to brilliant shades of yellow, orange, and red, as well as brown. These color changes are the result of transformations in leaf pigments.

The green pigment in leaves is chlorophyll. Chlorophyll absorbs red and blue light from the sunlight that falls on leaves. Therefore, the light reflected by the leaves is diminished in red and blue and appears green.

The molecules of chlorophyll are attached to the membranes of disc-like structures, called chloroplasts, inside the cells. Chloroplasts are the site of photosynthesis, the process in which light energy is converted to chemical energy. 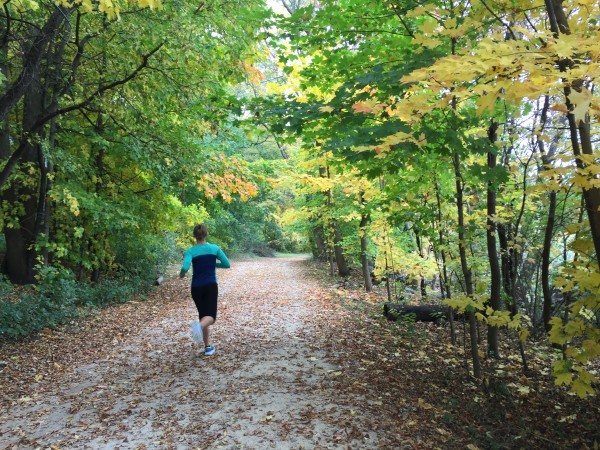 A runner takes in early fall color on Picnic Point at UW–Madison in 2016//Photo: Kelly Tyrrell

In chloroplasts, the light absorbed by chlorophyll supplies the energy used by plants to transform carbon dioxide and water into oxygen and carbohydrates, which have a general formula of Cx(H2O)x .

In this endothermic (heat absorbing) transformation, the energy of the light absorbed by chlorophyll is converted into chemical energy stored in carbohydrates (sugars and starches). This chemical energy drives the biochemical reactions that enable plants to grow, flower and produce seed. 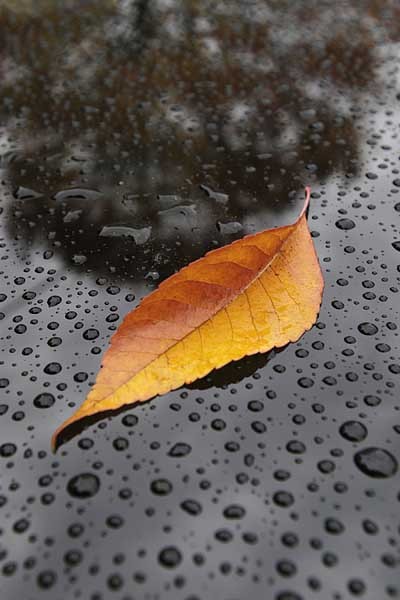 A colorful leaf sits on the glass of a car sunroof covered with water drops during a rainy autumn day//Photo: Jeff Miller, UW-Madison

There are two types of carotenoids. Some are hydrocarbons, compounds that contain only carbon and hydrogen, such as beta carotene (C40H36). Others, called xanthophylls, contain atoms in addition to carbon and hydrogen, an example being lutein (C40H56O2), which also contains oxygen. The carotenoids function to protect the chlorophyll from a chemical process called oxidation and they also serve as accessory light absorbers. They absorb energy from light of different colors than that absorbed by chlorophyll, and the energy they absorb is transferred to chlorophyll.

A third class of pigments that occurs in leaves is the anthocyanins. Anthocyanins absorb blue, blue-green, and green light. Therefore, light reflected by leaves containing anthocyanins appears red. Unlike chlorophyll and the carotenoids, anthocyanins are not attached to cell membranes. They are made in the cell by an energy-consuming process initiated by light. As they are made, they are released into the cell sap. Anthocyanin pigments are responsible for the red skin of ripe apples and the purple of ripe grapes.

Because exposure to light is required to produce the red pigment, apples often appear red on one side and green on the other; the red side was in the sun and the green side was in shade. Similarly, leaves on a tree are reddest on the sunny side.

In autumn the pigments in leaves begin to degrade. The destruction of chlorophyll progresses more rapidly than that of the carotenoids. As chlorophyll is destroyed, the green color of the leaf fades, leaving behind the yellow color of the carotenoids. In some trees, anthocyanins form in autumn, and these pigments cause the yellowing leaves to turn first orange and then red. Red maples, red oaks, and sumac produce anthocyanins in abundance and display the brightest reds and purples in the autumn landscape. In other trees, such as the beech, as the yellow carotenoids are destroyed, their color is replaced by the brown that results from the oxidation of tannins in the leaf.

The range and intensity of autumn colors is greatly influenced by the weather. Warm, wet weather delays the disappearance of chlorophyll and the appearance of anthocyanins. Cool, dry weather favors the destruction of chlorophyll. Sunny weather promotes the formation of anthocyanins. So, the brightest autumn colors are produced when dry, sunny days are followed by cool, dry nights. 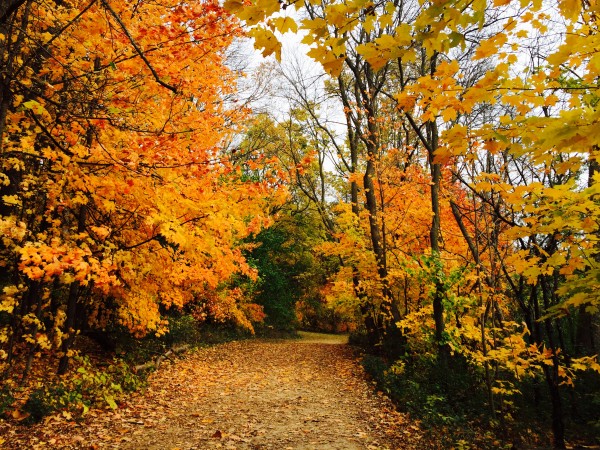 Oranges, reds, yellows and greens on display on Picnic Point on the UW–Madison campus in 2014//Photo: Kelly Tyrrell

The right combination of tree species and likely weather conditions produce the most spectacular color displays, prominent in places like New England, Michigan, and Wisconsin. States in these regions maintain a fall foliage “hotline,” keeping color watchers apprised of the peak viewing locations and times. In Wisconsin, peak viewing locations and times is provided by the Division of Tourism here. The U.S. Forest Service also provides information on fall colors at National Forests and Grasslands, accessible here.

Eventually, colorful autumn leaves begin to brown and fall. During summer, the leaves of trees are factories producing sugar from carbon dioxide and water by the action of light on chlorophyll. Water and nutrients flow from the roots, through the branches, and into the leaves. The sugars produced by photosynthesis are transported from the leaves to other parts of the tree, where some of the chemical energy is used for growth and some is stored. The lengthening nights of autumn trigger changes in the tree. One of these changes is the depositing of a corky layer between the branch and the leaf stem. This layer protects the branch surfaces that will be exposed when the leaf falls, but it also interferes with the movement of nutrients into and out of the leaf.