Shine a laser pointer at a cat, and the cat may see and try to catch the light, but it certainly won’t feel it.

What if that light were not a milliwatt laser, but one hundred trillion times stronger — and the cat were essentially weightless, floating in space?

“Normally, optical forces are zero — you don’t feel light pushing on you. But with a very strong laser on a very light object, the forces start to be measurable and significant, and we are interested in studying those forces,” says Victor Brar, assistant professor of physics at the University of Wisconsin–Madison. “A new idea called laser sailing is one area where these optical forces become relevant.”

Laser sails are a proposed type of spacecraft that could take us to new stars, including our closest neighboring star system, Alpha Centauri, and then send images back to Earth. But Alpha Centauri is four lightyears (nearly 24 trillion miles) away. A conventional spacecraft would take around 100,000 years to reach it. Laser sailing could reduce travel time to as little as 20 years.

The laser sail in space (grey circles) is propelled by the optical force of a laser pointed toward Alpha Centauri from Earth, (color gradient volcano-like structure). The center, completely opaque to the laser, contains the camera and equipment to transmit photos back to Earth. The outer ring is comprised of a ‘metasurface’ that can self-correct to remain in the laser beam, even when it shifts to the side (middle image) or tilts (right image). Modified from Siegel et al., ACS Photonics

By aiming 100 gigawatts of laser power at our neighboring star system, then placing an ultralight, four-by-four meter laser sail in the beam’s path, the optical forces would be strong enough to propel the spacecraft at one-fifth the speed of light.

“That’s one of the problems: there is no way to steer the spacecraft. Once it’s going, it’s going,” says Joel Siegel, a physics graduate student in Brar’s group. “We were inspired by recent interest in laser sailing to design something that traps itself in the beam.”

So Brar, Siegel and colleagues set out to design a “metasurface:” a nearly two-dimensional array of tiny silicon unit cells that are positioned across the sail so that they reflect light in a way that allows it to remain in the laser’s trajectory. When the laser loses focus — about as far away as Mars — the sail is traveling along the correct path at nearly one-fifth the speed of light.

In a study published last year in ACS Photonics, Siegel and his colleagues conducted two main sets of computational simulations to design a stable, self-correcting sail. 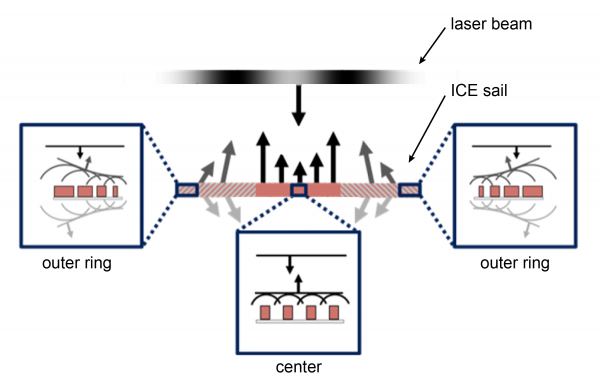 In the first, Siegel used what he calls a perfect optical model: without worrying about if the metasurface could be constructed, he first wanted to find which sail parameters and laser beam configurations could combine to construct a stable sail.

“This first part was all done with a simple MATLAB program: you just calculate at each point what the optical forces are, you sum them up, you get a net force, and then you can time evolve the system using equations of motion,” Siegel says.

The calculations suggested that the best design was an “inverted cat-eye” sail deign with a “doughnut” laser (the most intense light is a circle, with intensity dissipating inside and outside the circle). Siegel could then continue to play around with beam configurations, eventually landing on conditions that produce the stability and velocity the sail needs.

“From there, we can ask, ‘If we have this specific design with these beam parameters, what gets us the best structure?’” Siegel explains. “I know exactly what the reflection profile looks like, now how do I actually make the metasurface?” 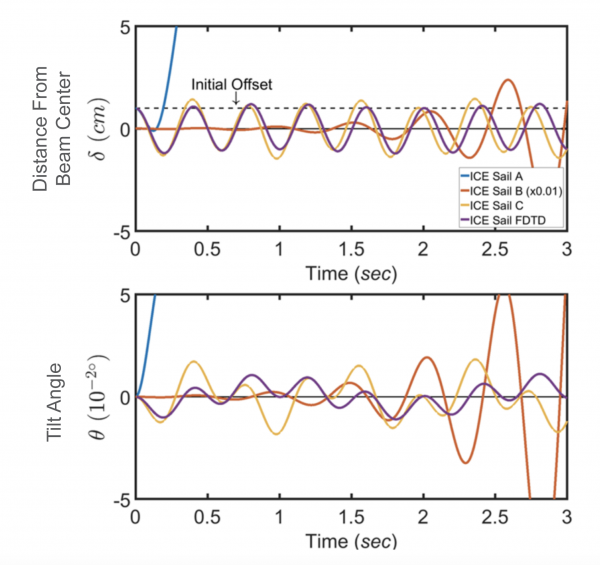 In the first set of computer simulations, different sails, represented by the different colored lines, were measured for their location with respect to the center of the laser beam (top graph) or the angle they tilted from horizontal (bottom). In both situations, some sail designs immediately fly out of the beam, but some are able to withstand slight perturbations and self-correct. Modified from Siegel et al., ACS Photonics

Siegel and his colleagues next virtually designed the metasurface, arranging those tiny silicon unit cells in various arrangements and simulated how the laser light would reflect and apply force to the sail. When they compared this metasurface to the perfect optical model, they found they were in close agreement. In other words, the self-stabilizing sail is technically achievable.

Of course, technically achievable in computer simulations is not the same as achievable in the real world. Brar and Siegel next want to construct a scaled-down version of their sail and test it in an ultrahigh vacuum chamber in the lab that mimics conditions in space. The sail also needs to be designed to not fold on itself, and to dissipate the heat from the powerful laser.

But with a good start to the sail design, and a mere 20-year travel time (plus around four years to transmit the images back to earth), it is not out of the question that Brar, Siegel, and many people alive today will see close-up images of our nearest star system in their lifetimes.

UW–Madison associate professor of electrical and computer engineering, Mikhail Kats, and research assistant Anthony Wang were co-authors of the study.