Children diagnosed with autism spectrum disorder, or ASD, often are significantly delayed in expanding their vocabularies and other language skills compared to typically developing children.

Yet, “we know very little about [language] processing in [children with ASD] or the mechanisms underlying it,” says Susan Ellis Weismer, a professor of communication sciences and disorders at UW-Madison and a Waisman Center researcher.

In a recent study published in the Journal of Autism and Developmental Disorders, Ellis Weismer and her colleagues explored whether this delay in acquiring language skills by children with ASD could be caused by a mental processing style that focuses on finer details at the expense of the overall picture.

“To understand language and communicate, you must be able to integrate linguistic content, non-verbal cues and other environmental or surrounding situations,” says Ellis Weismer. “It’s being able to focus on the details and see the global context.”

Some researchers have proposed that prioritizing details over the bigger could explain why some individuals with ASD can excel at detail-oriented tasks, such as mathematics or programing, yet face challenges communicating with other people.

To test whether this “details vs. bigger picture” theory could explain why young children with ASD often have difficulties with language and expanding their vocabulary, Ellis Weismer recruited 30 typically-developing children and 30 children with ASD to participate in sets of ‘looking-while-listening’ tasks.

In these tasks, images are paired up and children are asked to identify particular objects depicted in the image. Sometimes the two images are completely unrelated to each other, like a green fish and a red hat (see Picture 1). Other times, the pairs are related – they might look similar (as in Picture 2) or belong to the same category (as in Picture 3). 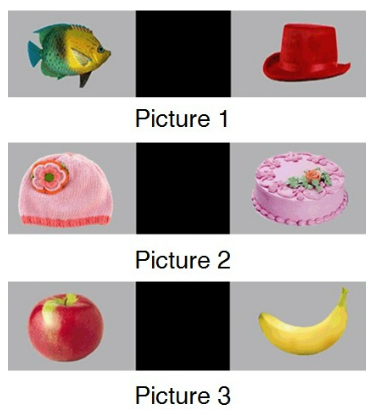 Children were asked to identify the target object in each pair, where the other object served as a distraction in order to examine their ability to separate details from the big picture. Courtesy of study authors.

“All the children have to do is watch little movies of paired images while they sit on their parents’ laps,” Ellis Weismer explains. “A voice says, ‘Where’s the doggy?’ or ‘Where’s the banana?’ and we can track their eye movements to determine what they are looking at and make inferences about what they are comprehending.”

Researchers have shown that children look at the named target item more quickly and with more accuracy when the other image in the pair, the distractor item, has nothing to do with the target, as in Picture 1.

But they take longer to focus on the target images when the distractors either look similar, such as the hat and the cake in Picture 2, or when they belong to the same category, like the apple and banana in Picture 3.

“We hypothesized that if the children with ASD prioritized details over the overall picture, they would really get hung up on the pairs of items that look similar,” says Ellis Weismer. “They would look at all the fine-grained details – such as shape and color – and take longer than typically developing children to focus on the correct images.”

On the other hand, the researchers expected that the typically developing children – but not the children with ASD – would get distracted by the pairs that belong to the same category.

Initially, the results of the experiment suggested that children with ASD recognized words less quickly and accurately than typically developing children did for all the three types of image pairs. But when the researchers dug deeper, they found that the differences in how the two groups of children performed in the tasks could be explained by accounting for differences in the size of their vocabularies.

“We think the differences in how quickly and accurately the children focused on the named objects was related more to their language abilities than their autism diagnosis,” says Ellis Weismer.

According to Ellis Weismer, these findings have helped lay to rest the usefulness of the “details vs. bigger picture” theory with respect to characterizing language difficulties in young children with ASD.

“We have helped to show that while children with ASD may be delayed relative to typically developing toddlers, they do engage in some of the same kinds of language processing,” she says.

Future work will include testing other theories of ASD and language processing. “ASD is a very complex and heterogeneous disorder and there are likely multiple underlying causes,” says Ellis Weismer. “We just have to keep looking.”

Other researchers involved in this project include Jenny Saffran and Courtney Venker at UW-Madison, Jan Edwards at the University of Maryland and Eileen Haebig at Purdue University.

Note: All images adapted from the original paper.

— Post by Adityarup Chakravorty, science writer for the Waisman Center at UW–Madison