That’s because “as the name implies, autism spectrum disorder (ASD) exists on a spectrum with a wide range of symptoms, skills and levels of severity with which it impacts a person’s daily life,” says Eric Rubenstein, a postdoc and Morse scholar at the UW-Madison Waisman Center.

In other words, no two people with autism share exactly the same traits.

This wide range of severity, however, has made it difficult for researchers to unearth connections between the different causes of ASD and how it manifests in different individuals. But in a new study published in the journal Autism, Rubenstein and his colleagues report making progress in the search for genetic clues that could explain mechanisms that underlie the disorder and help researchers better understand the risk factors for ASD.

Using data from the national Study to Explore Early Development, or SEED, Rubenstein was able to categorize children participating in SEED into four distinct groups based on their autism characteristics, or phenotypes. SEED is funded by the Centers for Disease Control and Prevention (CDC) and has collected data on children 3-to-5 years of age with and without developmental disabilities from six sites in the US, including the Waisman Center. 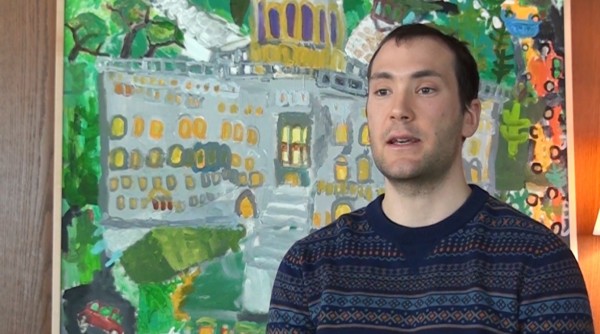 Eric Rubenstein describes a new study in which he and colleagues characterize traits in children with Autism Spectrum Disorder that may help identify genetic clues underlying the condition. Image courtesy of the University of Wisconsin–Madison Waisman Center.

“One advantage of SEED is that it collected a lot of data on children’s autism presentations, including information on diagnostic features of ASD, co-occurring medical conditions, and features like feeding and sleep issues that are common in kids with ASD,” says Rubenstein.

He and his colleagues then surveyed for autism-like traits in the parents of these children. Previous research had shown that parents who do not have a clinical diagnosis of autism but who show autism-like traits are more likely to have a child with ASD. These parents are said to exhibit broader autism phenotypes or BAP. Rubenstein found that autistic children who have at least one parent with BAP tended to cluster into one of the four groups they identified. Children in this group had mild language and motor delays, and conditions like anxiety, depression, increased aggression and attention problems. This was true of both boys and girls with ASD.

“This finding strongly points to a hereditary link for ASD in these families,” says Rubenstein.

This is important, he says, because it enables future researchers to focus on this subset of parents with BAP and their children with ASD and look for genetic clues to help explain certain ASD traits seen in both. It’s also relatively common for parents of children with ASD to help their children build social and adaptive skills though something known as parent-mediated intervention, where “the parent acts as the child’s therapist,” explains Rubenstein. “Knowing more about how ASD traits present in families can help us better tailor these interventions to help parents be the best therapists for their child’s needs.”

Rubenstein is not the first to examine the association between parents with BAP and their children with autism, but other studies have looked only at single traits at a time. He was able to compare BAP against 27 different ASD characteristics using a statistical technique called latent class analysis, which also enabled the research team to identify the four phenotypic groups.

“We were able to use 27 different indicators to create a more global look at autism subtypes,” he says. “We currently are working to expand this method to look at other traits, such as maternal anxiety and depression.”

Rubenstein says future research may also involve individuals with ASD who have children: “Studies like this are slowly taking us in that direction.”

Funding for this study was provided by Autism Speaks, the Centers for Disease Control and Prevention, the Colorado Department of Public Health, the Kaiser Foundation Research Institute, the University of Pennsylvania, Johns Hopkins University, University of North Carolina at Chapel Hill and Michigan State University.