The following is a guest post from Jesse Miller, a former graduate student at UW–Madison in the lab of Ellen Damschen and a current postdoctoral researcher at the University of California-Davis. He summarizes a paper he and his research team recently co-authored in the journal Landscape Ecology:

Grasslands are home to a remarkable diversity of plants and animals, but they are one of the most threatened ecosystems in the temperate world today. In the Midwest, almost all of the prairies and savannas that originally covered the landscape have disappeared, largely because of conversion to agriculture or other development.

However, another major threat to grasslands in the Midwest and around the globe is invasion by woody vegetation, which includes trees, shrubs, and other woody plants that encroach on grasslands. This encroachment can be detrimental to grasslands because most of the plants and animals found within them require open habitats with full sun. They can die when woody plants become dense.

I was curious how fire may have affected patterns of encroachment into grasslands called dolomite glades in the Missouri Ozarks. Glades are a fire-adapted system that burned every few years prior to Euro-American settlement in the region. The kinds of woody plants that invade glades are not as well-adapted to fire. After Euro-American settlement, most glades went through several decades of fire exclusion beginning around 1940, meaning they were not subject to these periodic burns. In the 1980s and 90s, ecologists began to realize that fire was an essential process for maintaining these grasslands, so government agencies began using prescribed fire as a management tool in glades. 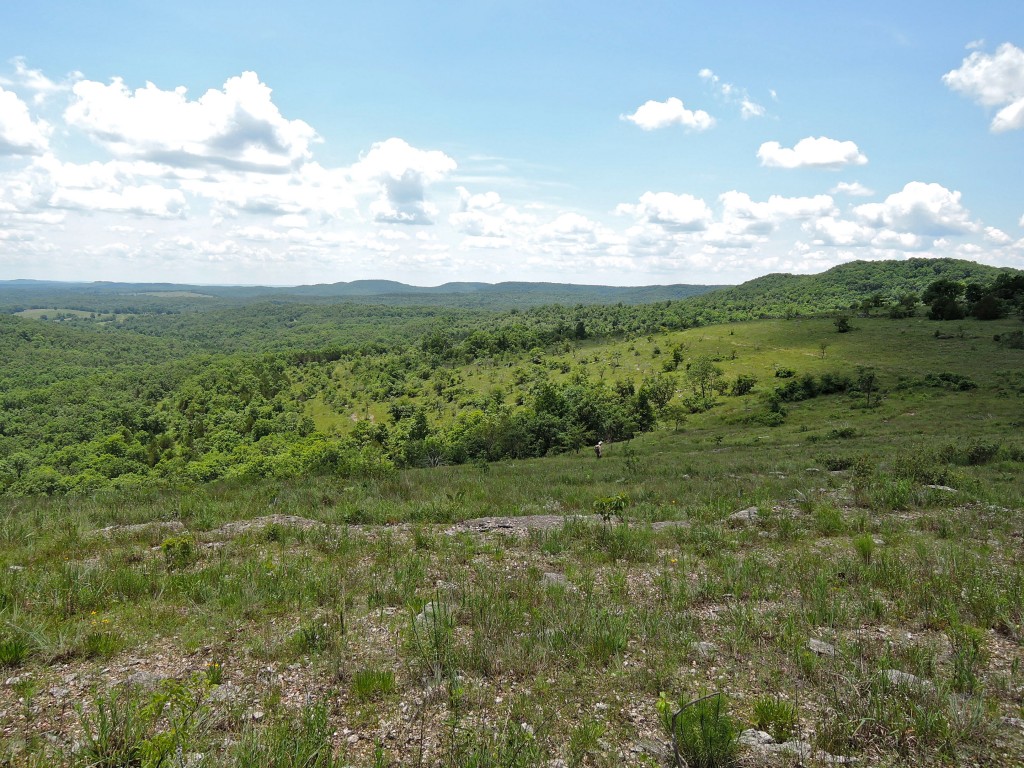 I used aerial photos to study long-term patterns of woody encroachment into glades in the Missouri Ozarks. Glades provide a good study system for understanding encroachment because, unlike tallgrass prairies in other parts of the Midwest, they are relatively intact, undisturbed ecosystems. This is due, in part, to their rocky soils, which are not suitable for agriculture. Glades have flora similar to tallgrass prairie flora, with a diverse assortment of wildflowers and warm-season grasses. Essentially, glades represent the easternmost extent of the tallgrass prairie system where it meets oak-hickory woodlands.

One of the most important findings of my study is that fire is able to “hold the line” against woody encroachment, preventing the establishment of new woody plants, but it typically does not remove established woody vegetation that has formed dense thickets. This may be in part because trees and shrubs shade out the grasses that carry fire through the landscape, reinforcing their dominance. 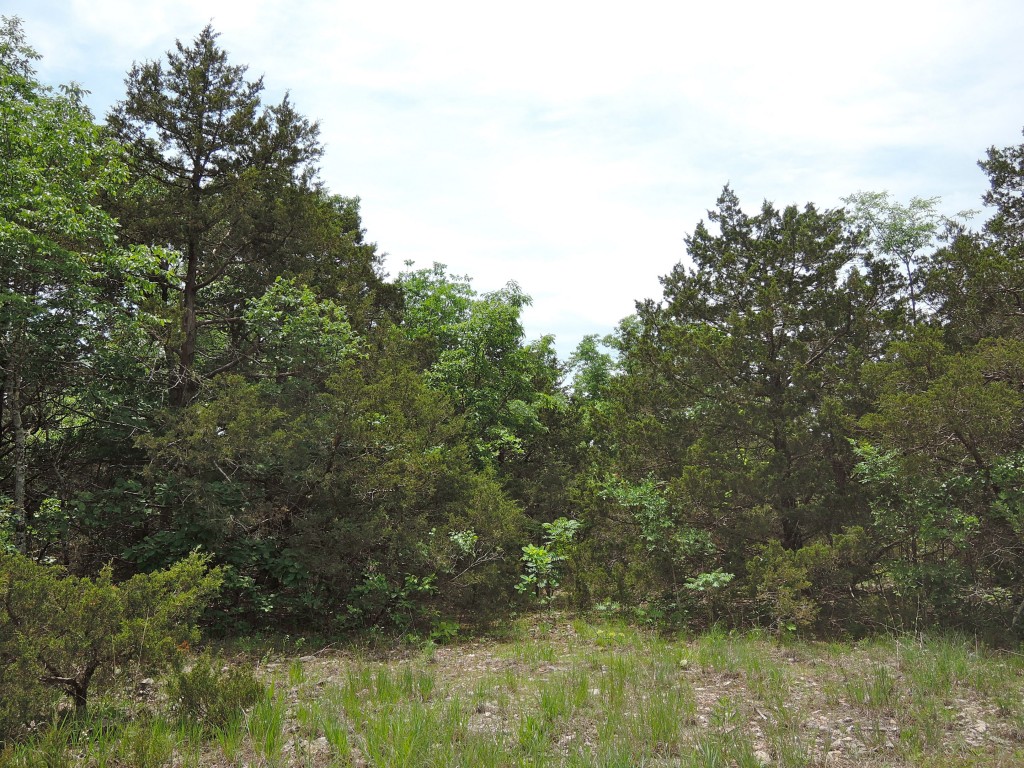 Example of a glade that has become densely wooded after decades of fire suppression. Few grassland wildflowers or grasses are able to grow in the dense shade of cedars. Credit: Jesse Miller

To examine patterns of encroachment, I created maps of tree and shrub cover from aerial imagery using classification techniques to distinguish open grassland from woody plants. From contemporary imagery, I was able to distinguish between conifers and broadleaf trees (like oak and maple) and shrubs because they reflect near infrared wavelengths differently.

I found that tree cover increased substantially over the last 75 years in glades in the Mark Twain National Forest near Ava, Missouri.  In 1939, the glade landscapes had an average of 8% tree cover. This increased to 58% by 2014. As one would expect, woody cover increased the most in glades that had not been burned over the 75-year period. However, woody cover remained much higher than the 1939 baseline even in glades that had been managed with fire and mechanical thinning over the last three decades.

Example of an aerial photo scene from 1939 and a tree cover map created based on it. Credit: Jesse Miller

I also found that cedars (Juniperus virginiana, one of the most invasive woody species in Ozark grasslands) and broadleaf trees and shrubs showed somewhat different spatial patterns of encroachment. Broadleaf trees and shrubs tend to expand out gradually from existing population centers, while cedars can disperse long distances and often colonize wide-open areas of grasslands. More broadly, this finding suggests that different management techniques may be needed to address different woody species that are encroaching on grasslands.

Maintaining open grasslands in relatively wet, productive regions such as the Ozarks will continue to pose a management challenge in the future. My results suggest that fire may be able to help maintain and restore grasslands early in the encroachment process, when woody vegetation covers less than about 40% of the landscape. After that, land managers may need to undertake more labor-intensive mechanical thinning of woody vegetation. Intervening early in the encroachment process is likely to be the most effective approach to grassland restoration.

Animated image showing (1) a landscape scene in 1939, (2) the same scene in true-color in 2014, (3) a false-color image from 2014 where cedars are shown as dark green and broadleaf trees and shrubs are light green and (4) a map of the area that is managed with prescribed fire in pink (the entire landscape scene). Credit: Jesse Miller

It’s important to note that some woody vegetation has long been present in glade landscapes, and managers should not seek to eliminate all woody plants from glades. For example, glades have occasional old, gnarled oak trees, as well as other trees and shrubs such gum bumelia (Bumelia lanuginosa).  But managers should focus on removing adventive woody species (native species that can become invasive) such as eastern red cedar (Juniperus virginiata) and other broadleaf shrubs that invade open grassland, especially after cattle grazing and/or fire exclusion have taken place. 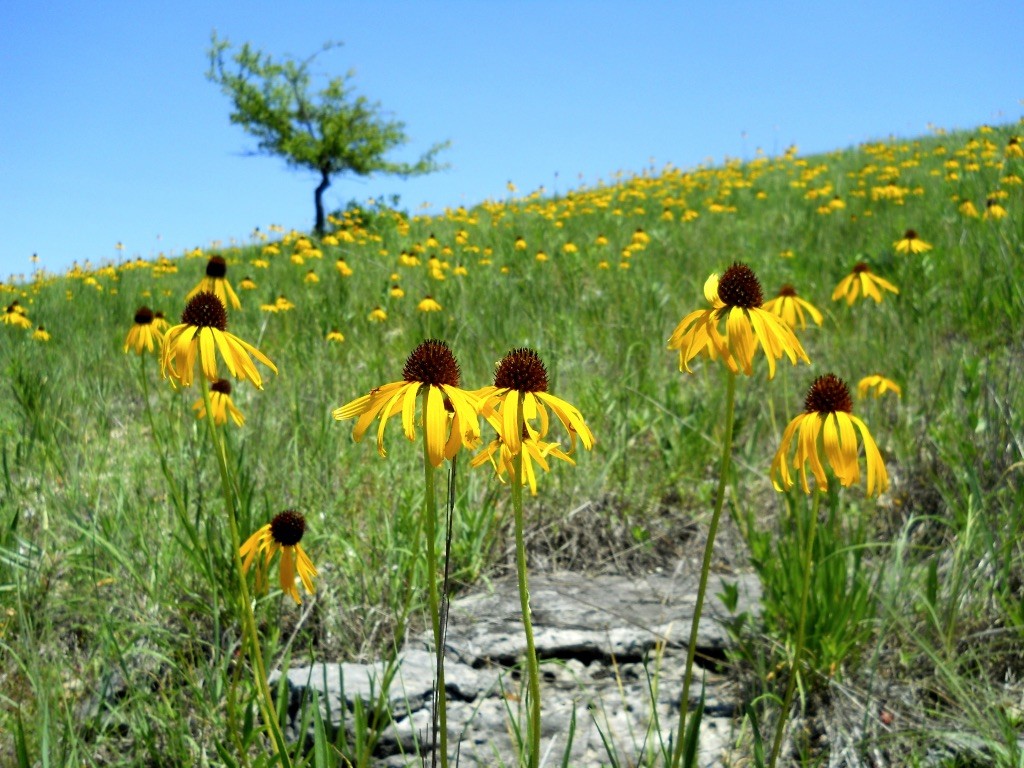 A glade with the regional endemic wildflower Ozark coneflower (Echinacea paradoxa) in bloom, with a gum Bumelia tree in the background. Native wildflowers such as this coneflower are threatened by woody encroachment of glades. Credit: Jesse Miller