A study published Wednesday, November 14 in Science Advances by The Nature Conservancy and 21 scientific partners in the United States and Europe highlights the power of natural landscapes to resist climate change in the U.S.. Because grasslands, wetlands, forests and other ecosystems naturally absorb and store carbon, the study shows that protecting and preserving these features of the natural world could allow for the annual absorption of one-fifth of all U.S. greenhouse gas emissions – the equivalent to emissions from all U.S. vehicles.

While numerous studies have examined the climate-related effects of forests and agricultural lands, the new study is among the first to analyze the benefits of grasslands and coastal wetlands. This is due, in part, to the efforts of two UW-Madison co-authors: Tyler Lark, researcher in the Nelson Institute’s Center for Sustainability and the Global Environment (SAGE), and Seth Spawn, a graduate student in geography at SAGE. The two scientists led the study’s analyses of grassland conservation and restoration, and helped reveal the power of grasslands to fight climate change.

In fact, of the land management approaches assessed by the study, Lark and Spawn were able to demonstrate that maintaining grasslands is among the most cost-effective and scalable solutions to mitigating climate change. Grassland is categorized as any managed or natural area dominated by herbaceous or non-woody vegetation, like tall grasses and prairie plants, and these landscapes are well-known for their ability to absorb and store carbon in roots and soil. 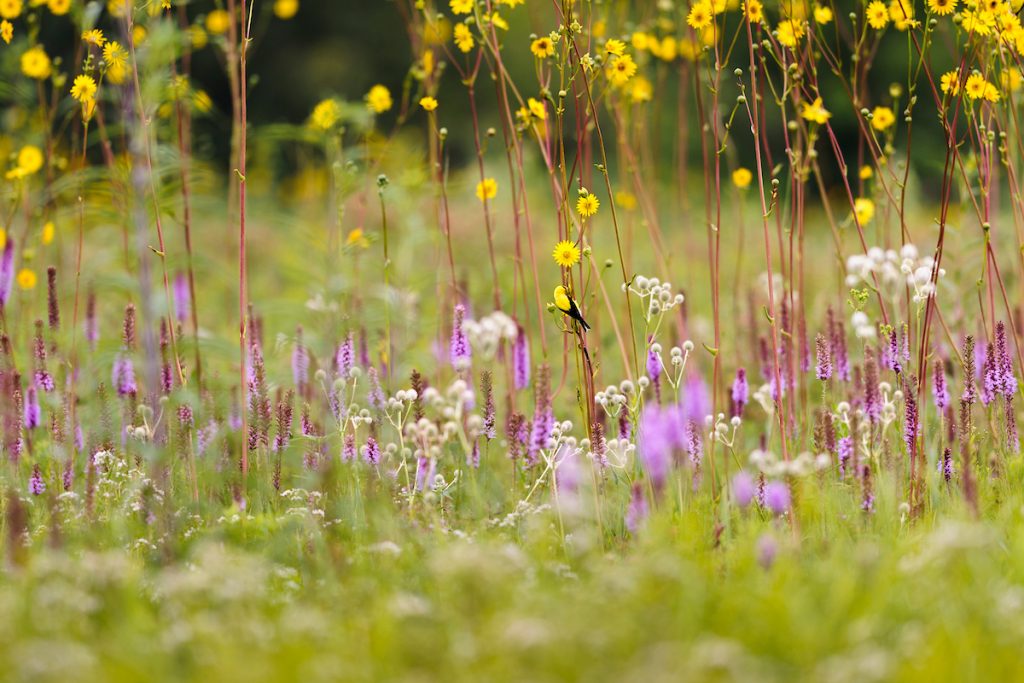 A goldfinch perches on amid a sea of flowering prairie dock, purple gayfeather and rattlesnake master plants at the Curtis Prairie at the University of Wisconsin-Madison Arboretum (Photo by Jeff Miller/UW-Madison)

“We’re really excited about this study, as it brings together leading expertise from all these individual climate solution pathways – from forest and fire management to cover crops and wetlands, and for the first time lines them up, allowing us to compare apples to apples,” says Lark. “It reveals what the priorities are and encourages a united effort by showcasing what can be accomplished, collectively. It’s a great example of something we could learn only by breaking out of traditional research silos and reaching across scientific disciplines.”

To study the specific effects of grasslands on the atmospheric carbon budget, Lark and Spawn combined data from several sources, including satellite imagery. With it, they built modeling tools to assess where grassland is being lost or converted to other types of landscapes and to determine how much carbon moves into the atmosphere as a result. Using this information, they calculated the overall cost and carbon sequestration achievable through grassland conservation and restoration throughout the U.S..

“At a time when we increasingly see and feel the negative effects of climate change and the challenges it poses, this research squarely focuses on the solutions and opportunities we have on hand to mitigate climate change,” Lark explains. “What we found is that there are a number of relatively cheap and easy solutions, such as maintaining and restoring grasslands and forests, that are win-wins for producers and land managers as well as society and the environment.” 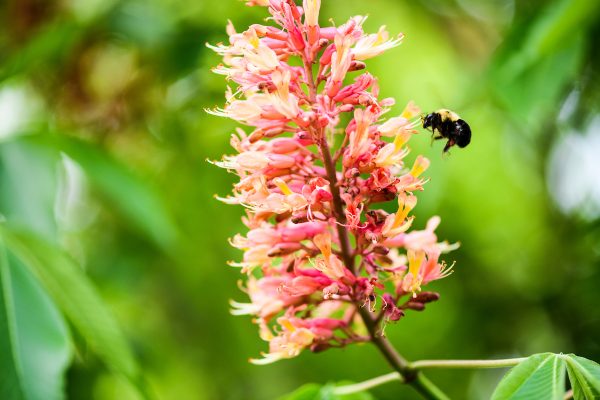 A bumblebee pollinates flowers of a blossoming buckeye tree at the University of Wisconsin-Madison Arboretum. (Photo by Jeff Miller / UW-Madison)

However, other studies show that grasslands are disappearing from the landscape of the U.S.. Some estimate grasslands are being lost at a rate of more than one million acres per year and as much as 28 percent of the carbon stored in grasslands may subsequently be released into the atmosphere.

“Carbon emissions are costly to society” Spawn says. “As the primary cause of global climate change, these emissions can be detrimental to agricultural productivity and human health. Keeping grasslands on the landscape and their carbon in the ground can therefore be beneficial to everybody.”

The new study also highlights the benefits and potential of cover crops to combat climate change – grains, grasses or legumes planted alongside or in rotation with a cash crop like corn or soy. Cover crops are not meant to be harvested, but instead offer a natural solution to issues such as soil erosion, weeds and pests. Cover crops were shown to help with carbon sequestration and are another viable way to reduce carbon in the atmosphere where maintaining grassland is not possible.

“We tend to think more about technological solutions to climate change,” said Spawn. “But this study demonstrates that low-cost, scalable solutions can be readily achieved by tweaking the ways we manage our lands.”

This realization has been significant for cities and states looking to mitigate climate change on a budget. At the Global Climate Action Summit hosted in San Francisco September 12–14, 2018, scientists and public leaders met to discuss these kinds of solutions and brainstorm other ways to keep global temperature increases below the two degrees Celsius set forth by the United Nations Paris Agreement. The study was also presented at that summit.

“With the significant loss of grassland on an annual basis, we’re not yet headed in the right direction and every day that we don’t act, emissions continue,” says Lark. “Fortunately, we now know the impact of this and other natural climate solutions; so it’s time to begin implementing.”

To learn more about climate change mitigation potential and the cost of each select pathway in your area, check out the latest tool from The Nature Conservancy and other Nature4Climate partners at: https://nature4climate.org/u-s-carbon-mapper/.