Home » Arboretum » Happy in the Arb, endangered in the world

This winter may now feel a shade lonelier for a handful of bumble bee princesses tucked away underground in the University of Wisconsin–Madison Arboretum, but they will probably wake up in the spring to a larger group of human admirers.

“It’s been a long time in the process, though the biological and population data were clear enough,” says Susan Carpenter, native plant gardener at the Arboretum. “There was never any sign that it was going to come out differently.”

The Arboretum is a bright data point in the rusty-patched bumble bees’ future.

By 2010, the bee was down to just 10 percent of its historical range. But that year it was also spied at work in the Arboretum. And when the Xerxes Society — the conservation organization that filed a petition for the endangered designation in 2013 — pointed bee-hunting wildlife photographer Clay Bolt to the Arboretum, its prairies and savannas were featured in Bolt’s documentary about the rusty-patched, “A Ghost in the Making.”

Bolt had been around the world and back, photographing all sorts of charismatic animals and the breathtaking places they live in. But it was in his North Carolina backyard, turning over rocks with his kids, that he caught the bug. If you’ll pardon the pun.

He spent more time focused on the insects close at hand, and saw some rusty-patched bumble bee specimens in a collection at Great Smoky Mountains National Park.

“It was a species I had never heard of,” Bolt told us last spring, when his film was nearing its public debut. “I guess a light went off when I saw their passenger pigeon. It was something so common that disappeared before we knew it. And here was this bee doing the same thing.” 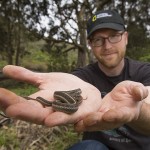 Disappointed at stop after stop as he headed west across the country, Bolt found himself chasing Susan Carpenter across the Arboretum’s Curtis Prairie. And then there were the bees. Rusty-patched bumble bees. Doing their thing. Hopping flower to flower, oblivious to any of the documentary drama.

In a way, Carpenter says, the endangered species designation is a stroke of good fortune.

Only the female rusty-patched queens-to-be survive the winter, already mated with male bees before they began their hibernation. They will emerge in mid to late April to start new colonies in a world that is now far more aware of their (albeit reduced) presence.

“One thing this does is raise the awareness and interest, puts it on a different level,” says Carpenter. “I hope that interest in the bee is followed by questions about what people can do to help, and my answer would start with what kind of habitat and food it needs.”

Leaving your lawn a little rough is a good step. Bumble bees tend to be ground nesters, and can make a home in lots of places typically found in un-manicured green space. Old chipmunk dens, hollow logs and root holes will fit the bill.

The good news on groceries is bumble bees are generalists. They’re happy to feed at all sorts of flowers. But unlike the well-known honeybee, bumble bees don’t store food. 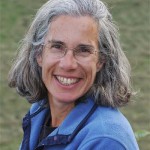 Some common landscaping ornamentals are unsuitable, though, and Wisconsin bees probably prefer native flowering plants. But that makes for an easy step to take, according to Carpenter.

“If you just replace some of those exotic ornamentals in your yard with native plants, you’re providing bee habitat without having to find extra room,” she says.

“That can be tricky, because garden center plants are sometimes treated with systemic insecticides before you purchase them,” Carpenter says.

There is plenty of information available from the Xerces Society, and Carpenter encourages people to visit Bumble Bee Watch for tips on providing bees with good habitat and identifying the insects that so up to enjoy it.

“They should watch and see what they have attracted,” says Carpenter. “I’d encourage people to get involved in Wisconsin Citizen-based Monitoring Network, in monitoring pollinators, or to help Bumble Bee Watch by submitting photos.”

These and other efforts help etymologists and ecologists track changes in number and range and keep tabs on key contributors to healthy ecosystems.

At the Arboretum, the new status for the rusty-patched bumblebee may draw some curious visitors, but probably won’t change life much. Some mowing and prescribed fire schedules may be shifted to ensure they don’t disrupt the bees’ life cycle.

“And we will probably be doing some more structured monitoring on the areas we’re restoring this year, where habitat is being improved,” Carpenter says. 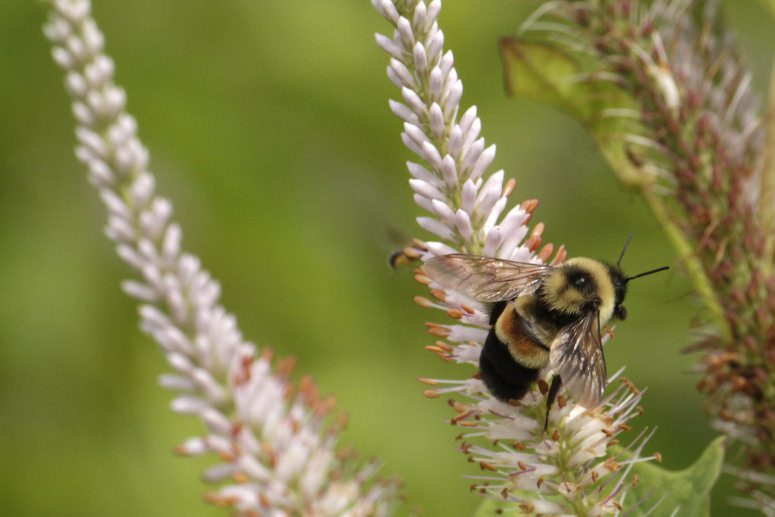 A rusty-patched bumblebee on Culver’s root in the UW–Madison Arboretum. The Arboretum’s insecticide-free prairies, woodlands and gardens are a paradise for the rusty-patched and at least a dozen other bumblebee species. PHOTO: SUSAN DAY/UW-MADISON ARBORETUM

But if the Arboretum is a home to a healthy population of rusty-patched bumble bees, it’s probably because they’ve been doing things right. At least, that’s what Clay Bolt had in mind when he considered how John Curtis’ 70-year-old prairie restoration work led to his first encounter with what could have been a ghost.

“When he helped create that prairie, he had no idea that relatively small patch of land would be a stronghold for a species,” Bolt said. “People want to do great things for conservation — big things, traveling all around the world. But some of the most important things you can do are small, and happen in your backyard.”