When spring turns to summer, there are three things to count on: longer days, warmer weather and the return of monarch butterflies.

Every year, thousands of monarchs make their way down south to Mexico in the early fall, where they wait out the winter in cool forests. In the spring, they come back up north, stopping to lay eggs along the way. They may not make it all the way back up north, but their offspring will continue their migration. This year, the first monarch in Wisconsin was spotted May 7 in Middleton. 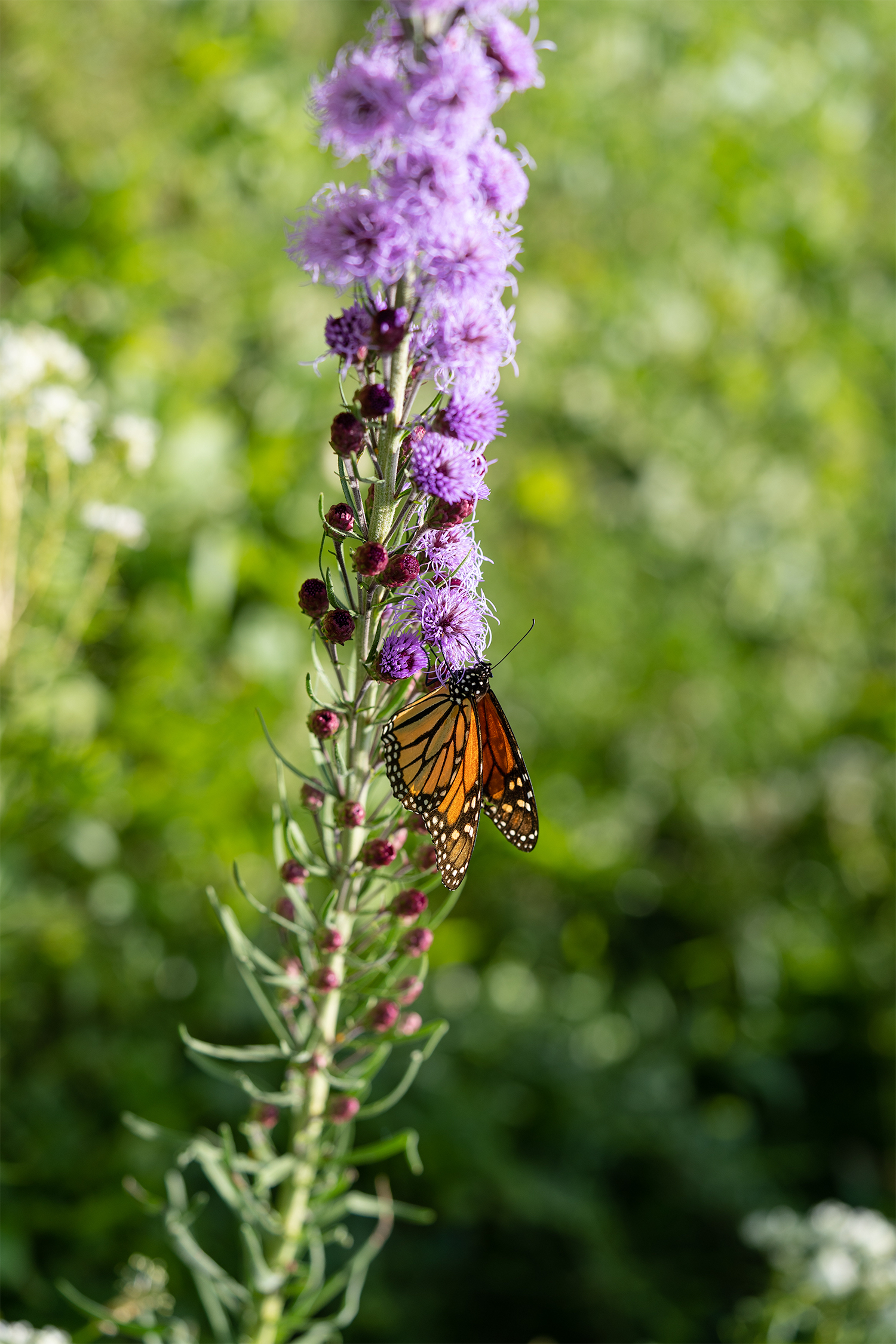 Karen Oberhauser, director of the University of Wisconsin–Madison Arboretum, is a renowned monarch expert. She’s studied the butterflies for 35 years, and knows all about the intricacies of their journey.

Oberhauser said the monarchs have a sophisticated internal clock they use to compare where the sun is in relation to their bodies. So if they keep the sun on their left in the morning and the sun on their right in their afternoon, they know they’re flying south.

But what Oberhauser and her colleagues don’t know is how they get to the same specific locations. Down in Mexico, there’s a few select spots with the same cool, mountainous climate where hundreds, even thousands, pack together, she said.

The UW Arboretum runs a couple of citizen science programs to study monarchs. One, called Journey North, has run for 26 years, Oberhauser said. Program participants log their first monarch sighting in the spring. They also log their first sightings of other migratory birds and insects.

“[Journey North] engages people all over the country in observing monarchs during the breeding season, or during the time that they’re in the U.S,”  Oberhauser said. “There’s a map online … as monarchs move across the country, people track the first monarchs that they see. And there’s people just spread everywhere. There are literally hundreds of people.” 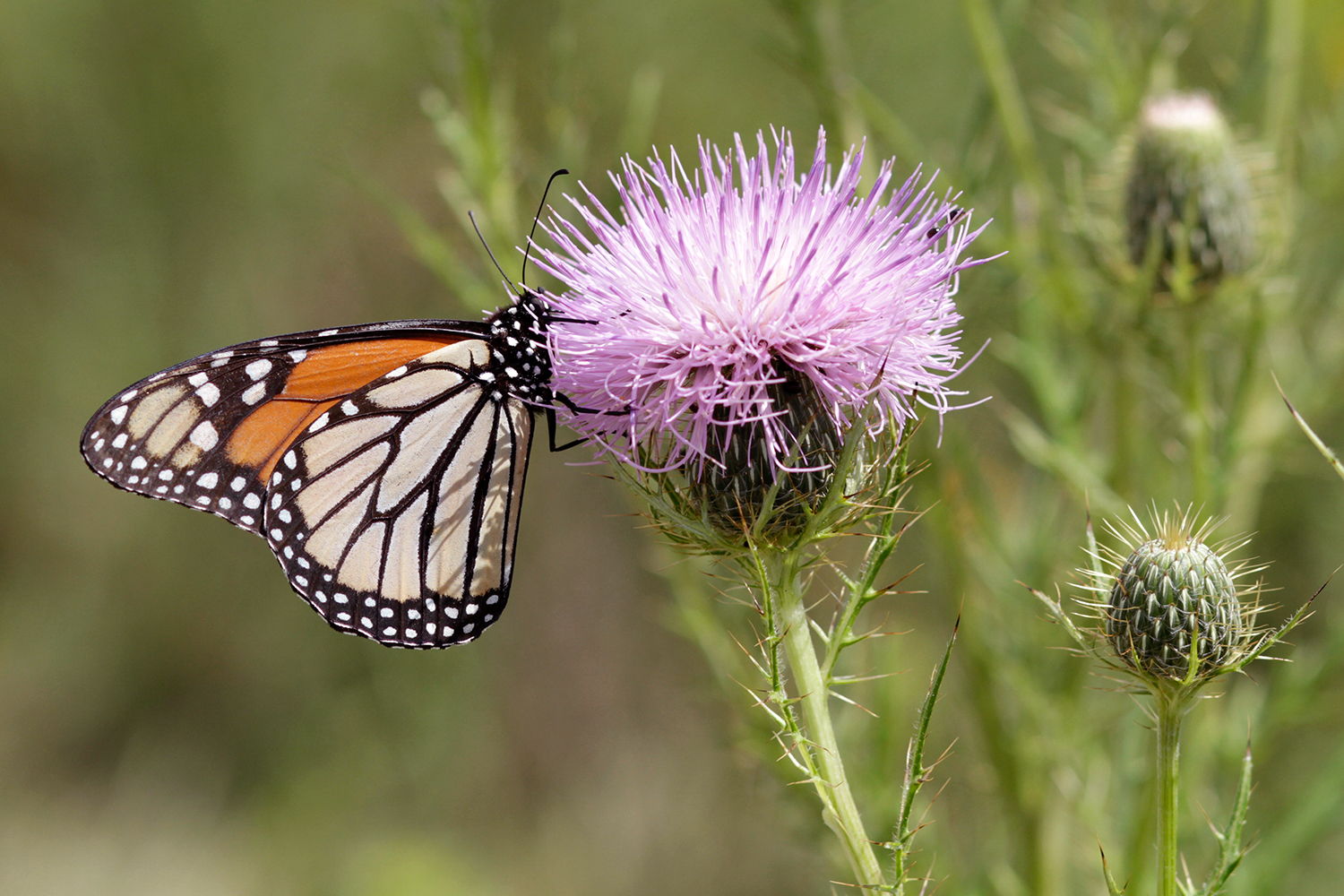 Oberhauser said she uses the data from Journey North in her own monarch research. Its data helps inform the monarch migration timeline, and researchers can determine whether it’s changing year to year, where monarchs head when they come north and other important metrics.

The other citizen science program, called the Monarch Larva Monitoring Project, started at the University of Minnesota, where Oberhauser used to work. Citizen scientists in Madison and across the U.S. and Canada go individually to an assigned area every week, where they count the number of monarch caterpillars they see. They mark which instar, or life stage, the caterpillars have reached, and they count any adult monarchs or monarch eggs they see as well.

Retired attorney Martha Askins volunteers for the Monarch Larva Monitoring Project in Madison. She said she signed up for the program because she’s always loved wildlife, and she wanted to learn more about the butterflies and help monarch conservation efforts.

Oberhauser said monarchs face several threats today, including habitat loss, climate change, pathogens and insecticides. Since monarchs are a mobile species that migrate, they can find new habitats when they lose space in one area. But doing so requires a lot of energy and effort, and then they can’t lay as many eggs, which leads to population declines. 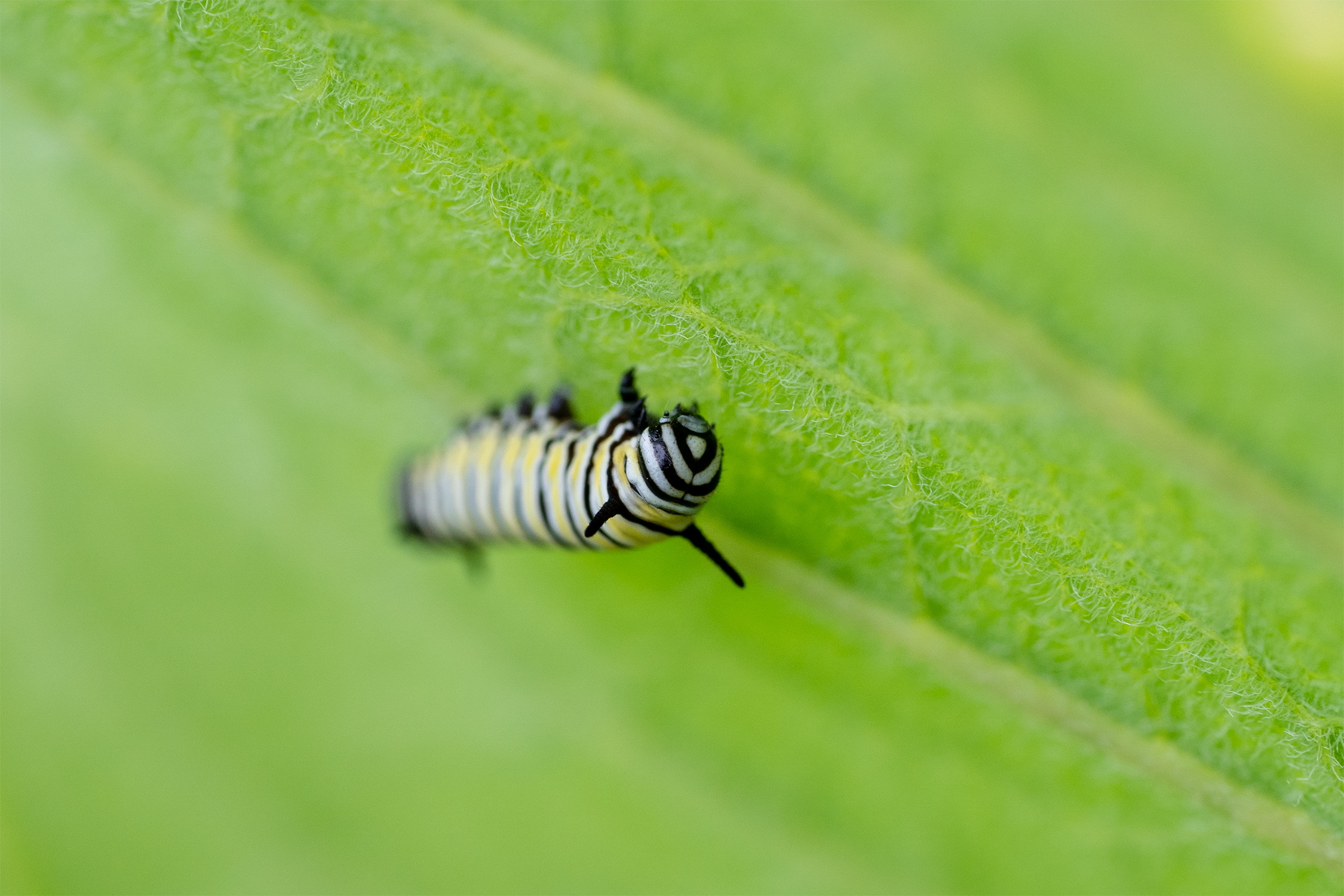 Climate change, Oberhauser said, also threatens monarchs, since they require a more temperate, cooler climate. Summers that are too hot or too dry can kill them, and climate change leads to patterns where these are common.

Another rising threat to monarchs, Oberhauser said, is insecticide use. Since monarchs are insects, any chemical designed to kill other insects like mosquitoes or agricultural pests will also kill them. And when monarchs lose habitat, they may be forced into pesticide-contaminated areas.

So what can those who want to help conserve monarchs do to help? Oberhauser said planting monarch habitat in your own yard or garden is a great way to start. Monarchs lay their eggs on a plant called milkweed, so planting milkweed, along with other kinds of flowers they can drink nectar from, helps restore some of their habitat.

Monarchs like any kind of milkweed, so try to find whatever kind grows best in your garden, Oberhauser said. And when planting flowers, choose a variety that bloom at different times between May and September, and make sure not to plant any that have been treated with insecticides.

While monarchs aren’t necessarily the most ecologically important species in Wisconsin, Oberhauser they’re still important to conserve because they’re a valid and beautiful part of nature. They’re also a species that gets many people excited about the natural world.

“We should feel that it’s just the right thing to do, to save the species,” Oberhauser said. “We should try to save things not just because they’re ‘important.’ But another reason that I think we should save monarchs, is that they are the species that connects people to the natural world.” 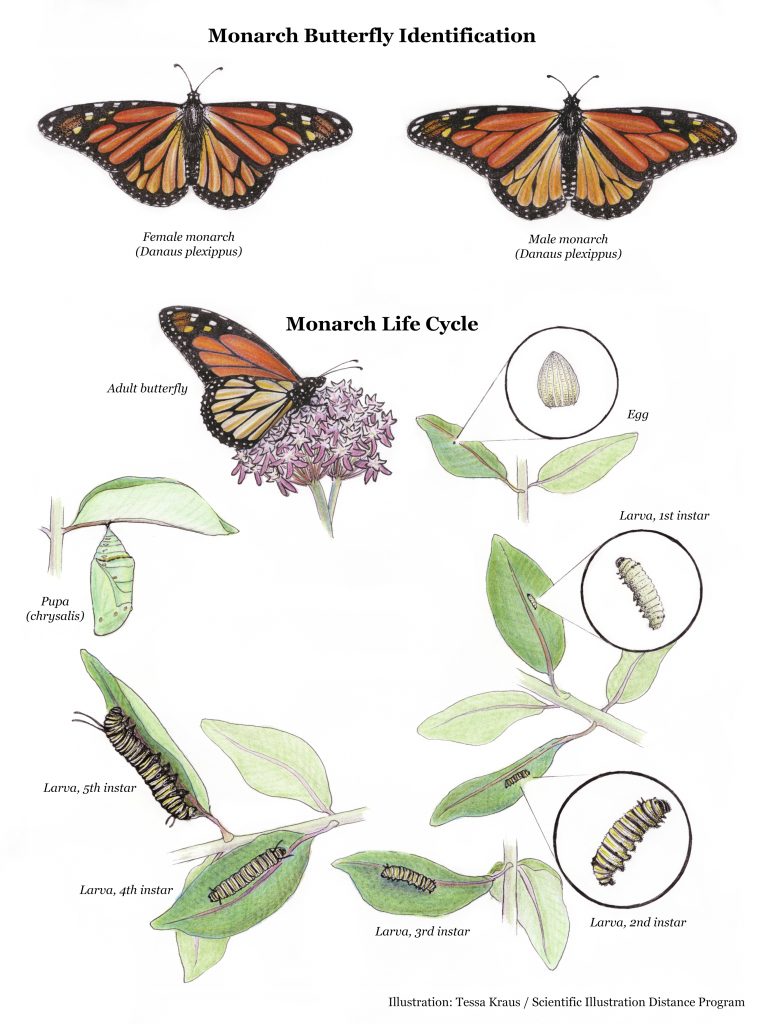 Life cycle of the monarch and how to identify males and females. Illustrations by Tessa Kraus/Scientific Illustration Distance Program.

4 thoughts on “As monarchs arrive in their summer ranges, citizen scientists aid in monarch conservation”