If you’ve ever been in the Wisconsin Institutes for Discovery the week of February 10th, you’ve probably heard of or witnessed Darwin Day, put on by the J.F. Crow Institute for the Study of Evolution.

Every year, researchers across the University of Wisconsin–Madison campus come together on the father of evolution’s birthday to share their evolution-focused work and conduct outreach with K-12 students about one of biology’s most integral discoveries. But this year, things look a little different.

Last year, Darwin Day just barely missed the advent of the COVID-19 pandemic in Wisconsin. This February came with no such luck. Which meant, for graduate student and Darwin Day chair Jaime Cordova, figuring out how to do everything online.

Usually, Darwin Day consists of a series of events spanning the week — an evolution-focused speaker at Wednesday Nite at the Lab, a special presentation at the weekly Evolution Seminar Series, and a day full of “exploration stations” in the Discovery Building, led by labs across campus and targeted towards K-12 students. 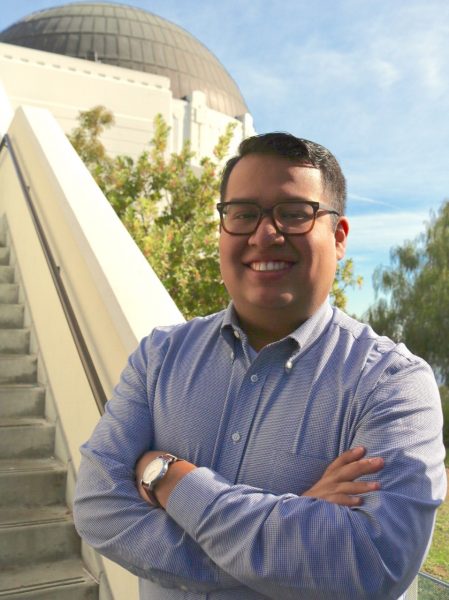 Graduate researcher and Darwin Day Chair Jaime Cordova has led the process of converting Darwin Day to a virtual experience.

This year, Cordova says, they couldn’t do online exploration stations, as too many issues would emerge, and they had to adapt their speakers to a virtual format.

“It was challenging in the sense of ‘How do we make it most accessible to people?’” Cordova says. “A lot of people have access to Zoom, for example, but to make it even more accessible, what we’re doing is we’re actually going to be live streaming it over YouTube because that’s even easier. You could put YouTube on your phone, you could pull up YouTube on your TV.”

In place of exploration stations, Cordova’s team created virtual resources for parents to engage their kids in hands-on experiments and activities at home.

And, for the first time, Darwin Day will include a documentary screening: “The Serengeti Rules,” which follows five biologists’ fundamental discoveries. The screening will include a Q&A with emeritus UW–Madison genetics professor Sean Carroll, a renowned evolutionary biologist, who wrote the book the documentary is based on.

This year, amidst the pandemic, the Darwin Day committee has been planning an event touching on the evolution of COVID-19. The difficulty there, Cordova says, was finding the balance between teaching about the intricacies of virus evolution and staying cognizant of and sympathetic to the impact of the pandemic on people worldwide.

“With the pandemic, we’ve seen how the virus has evolved and how new strains are developing,” Cordova says. “We wanted to touch on that because we felt that that aspect isn’t always talked about in the media. But we also didn’t want to be tone deaf about it — hundreds of thousands have died because of this pandemic. We didn’t want to just say ‘Oh, look, we’re more interested in the evolution side of this thing.’ So we’re trying to be as sensitive as possible.”

Feb. 10’s virtual Wednesday Nite at the Lab, “Viruses as unique and long-lived as their human hosts,” will feature Moriah Szpara, a Pennsylvania State University virologist specializing in viral genetics who will dive into the relationships between viruses and their hosts.

The last virtual Darwin Day event, February 17th’s Wednesday Nite at the Lab, will feature a panel of evolutionary biologists from all over, including Yale University’s Paul Turner, University of California, San Diego’s Aspen Reece and the University of Otago’s Jemma Geoghegen. The panel will explore the co-evolutionary relationship between mammals and microbes. UW–Madison infectious disease researchers Tony Goldberg and Caitlin Pepperell will moderate the panel.

Switching to an all-virtual conference also means an opportunity to try new things — including international voices like Chilean biologist Alexa Garin-Fernandez, who will deliver the Feb. 11 Evolution Seminar on the evolution of and new frontiers in marine virus research. Garin-Fernandez works at the Alfred Wegener Institute for Polar and Marine Research in Bremerhaven, Germany, where she studies microbial and marine virus ecology.

Cordova says they’re also hoping to engage more people across the state this year who may not have been able to travel to Madison in the past. 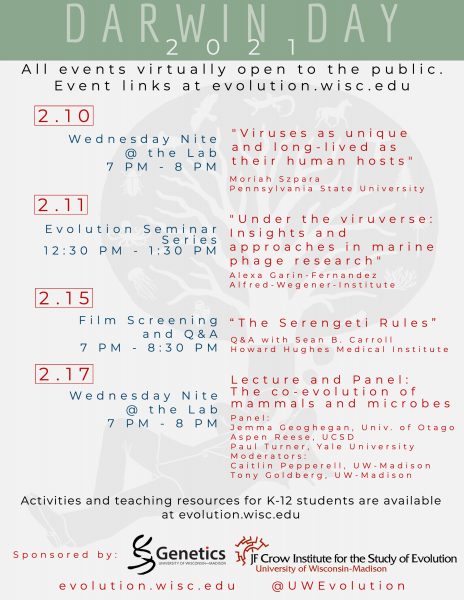 “We’re hoping to reach out to far more people than just those in the center of the state, and hopefully get an audience from throughout the state and potentially elsewhere,” Cordova says. “And also, normally we would only fly out one speaker, but now we have five speakers from around the country and around the world.”

Cordova says to him, Darwin Day and outreach in general is personally significant because as a kid growing up in a low-income community, he didn’t always have access to engaging science. So now as a graduate researcher, he works to provide young people and these communities with the experiences and resources he didn’t have.

“I grew up in a relatively low income community, and I didn’t have a lot of scientists come out and talk to me — my science teachers and my doctor were the only people that I knew were scientists growing up,” says Cordova, an astrobiologist and NASA Solar System Ambassador. “So outreach is important because not only do I get to talk about science that I think is really awesome, but I also get to reach out to those communities that don’t necessarily have as great of access.”

And when it comes to spreading the word about evolution research and Darwin’s legacy, Cordova says while evolution can be a divisive topic in some spheres, during Darwin Day, he and his colleagues just want to help people think critically and learn more about evolutionary history. And for the K-12 students that participate in Darwin Day, it’s all about getting them excited about evolution.

“We can talk about something as simple as bacterial evolution — something that could be obvious to us as scientists — but being able to explain it to a kid and seeing how their faces light up? It’s so cool. And then they run off telling their teacher about it because they’re passionate about it,” Cordova says. “That’s probably the most rewarding thing.”