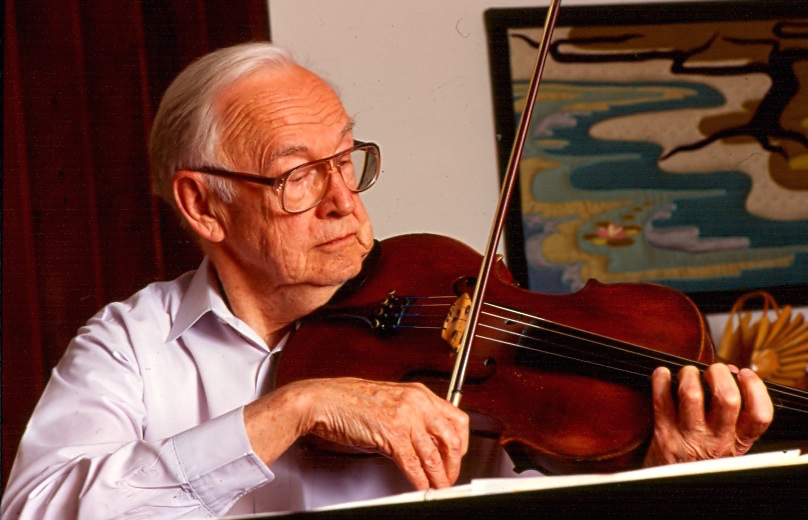 As we thought about the 206th birthday of Charles Darwin, celebrated this week at UW-Madison, we thought of two giants of genetic research who were on campus for more than 120 years, combined. 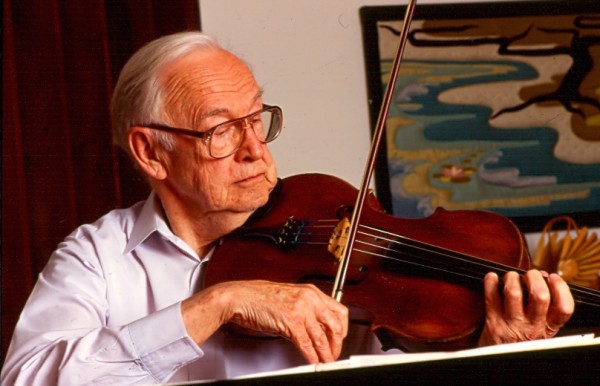 Jim Crow, namesake of the Crow Institute of Evolution, was an accomplished violist who played in orchestras in Madison during his long career in the department of genetics at University of Wisconsin-Madison. Credit:  Wolfgang Hoffmann, College of Agriculture and Life Sciences, UW-Madison

We interviewed Jim Crow in 2009, in his ninth office at UW-Madison, when the Crow Institute of Evolution was named for him. “I’m pleased, and rather surprised,” he said. “Usually these thing are named after a person has died, but I am not going to take the hint.”

When Crow passed away in 2012, the university reported that “His work touched nearly every aspect of the field and included mathematical and statistical genetics, inbreeding, genetic effects of radiation, natural variations in populations, sex determination, plant and animal breeding, selfish genes, transposable elements, the impact of mutations on populations, and the genetics of pesticide resistance.”

Crow was universally respected for a humble, gentle manner, yet he was a giant in mathematical genetics. “I always gravitated to math, but was not very good at it,” he said. “I had some very good mathematicians as students. Mootoo Kimura was very gifted, we wrote a number of things together, he did the math and I did the theory.”

The collaboration on random mutation with Kimura “evolved into the genetic clock that’s used to determine the timing of evolutionary relationships,” Crow said. Now it’s possible to calculate when two species last shared a common ancestor by dividing their genetic difference by the rate of change.

“When I think about satisfaction, almost number one is the graduate students,” Crow said. “I had more than 50 grad students and post-docs. I had no secret. I did try to accept students who were smarter than I was, so the field would get better, and most of the time I succeeded.”

What has changed in genetics over his 70-year career? 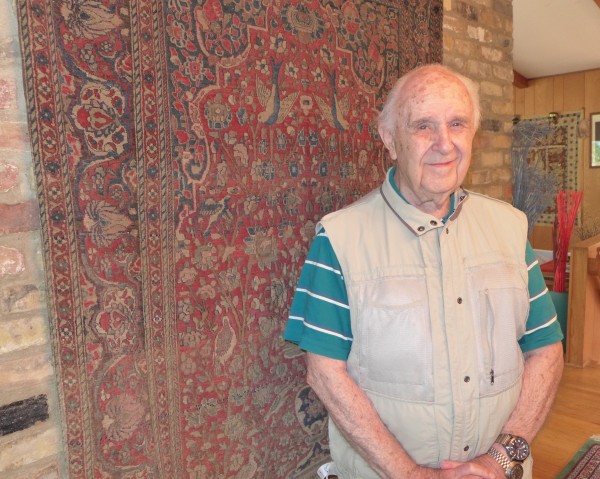 A Polish-born scientist who survived the Soviet, Nazi and Soviet occupations of Poland during World War II, Waclaw Szybalski emigrated to the United States in 1949. Gracious, considerate and ironic in person, he’s been called “a poet of the scientific method” by a former graduate student.

His insights stagger: In 1953, his studies of antibiotic resistance led him to advocate multi-drug treatment for tuberculosis — anticipating today’s treatment for serious infections like TB and HIV.

Szybalski arrived at UW-Madison in 1960, and two years later was the first person to insert DNA into human cells, and later to create functional DNA in a dish. He invented HAT selection, a method to identify cells that had been genetically modified. He was editor of the journal Gene, created tools for genetic engineers, taught a legion of highly successful graduate students, and, at age 93, had to cut short our conversation so he could attend the annual Molecular Genetics of Bacteria and Phages Meeting.

Szybalski “paid attention to detail in such a wide range of discoveries, and they all required creativity, new ways of thinking, and then keeping track of a great deal of complex stuff,” said former student Richard Burgess, founder of the UW Biotechnology Center. “This was before the computer, but he had advantage of having his own built-in computer.”

One thought on “Evolution’s pillars: Two titans of genetics”