When Max Haase set out for a walk in Green Bay’s Baird Creek Nature Preserve on a May day in 2015, it was pretty normal stuff. Baird Creek was practically in his backyard, and it was a good day for a hike — sunny and unseasonably warm for so early in the UW–Madison biology major’s summer break.

So, he took a sample bag with him, stopped near an elbow in the creek to scrape some bark off a sugar maple, and rearranged a few branches of the yeast family tree and redirected the way it will be used in biofuels research.

The few grams of bark he brought back to Madison and the lab of genetics professor Chris Hittinger were home to a previously unknown strain of yeast, which Haase has named Yamadazyma laniorum “in honor of the hardworking people of the historic meat packing industry of Green Bay, Wisconsin,” according to his recent study published in the journal FEMS Yeast Research. 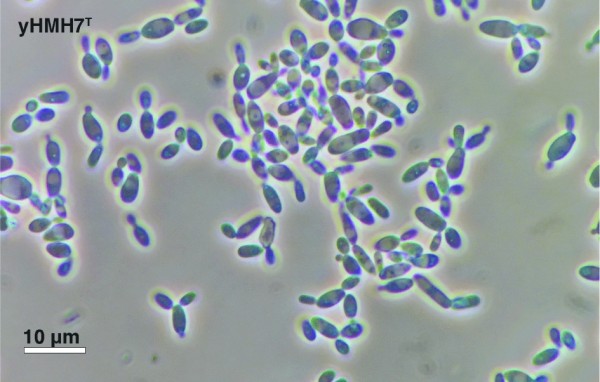 That’s “lanorium” from the Latin for “pertaining to butchers,” which is as close as you get to naming a yeast for the Green Bay Packers while maintaining some scientific detachment and avoiding any trademark implications. Plus, Haase has first-hand experience with the trade.

“I used to work in a sausage factory in Denmark (Wisconsin), too,” Haase says. “Lots of beer brats. It was a smelly job.”

For the last two years, he has worked in Hittinger’s lab as part of the Yeast Exploration and Analysis Science Team. The Wild YEAST Program isolates wild yeasts, grows them in petri dishes, and identifies them by reading some of their genes.

It’s hard to overstate the importance of yeasts, single-celled organisms whose greatest hits include bread, beer and lots of biology research. Yeasts eat sugar, reproduce quickly and don’t take up much room, giving scientists (like Hittinger) a handy platform for studying cell biology and evolution.

Yeasts are also the workhorses of the biofuels industry. Fermenting the sugars from the parts of plants people don’t eat is a good way to get ethanol and other fuels from a renewable source, and the reason the yeast prospecting done by Hittinger’s lab is supported by the U.S. Department of Energy’s Great Lakes Bioenergy Research Center (and the National Science Foundation, the U.S. Department of Agriculture, and the Pew Charitable Trusts).

The most abundant sugars derived from the plant cells used in fuel production are called glucose and xylose. Glucose makes up the biggest share, and is readily fermented by a yeast called Saccharomyces cerevisiae, the stuff of brewing and baking. But Saccharomyces doesn’t care for xylose, which still makes up a good hunk of the rest of the sugar — as much as 40 percent in some cases.

“Finding yeast species that can ferment the xylose is crucial to using all the plant material when you’re making fuel. It’s a roadblock to a higher yield,” Haase says. “That’s the point to going out in the wild looking for new species. You may happen upon the one that’s the best out there at fermenting xylose.”

What he happened upon while reading the barcode of Yamadazyma laniorum’s genes is that it is a close relative of Candida tenuis, one of the few yeasts believed to ferment xylose. That’s great news. Maybe Y. lanorium, like C. tenuis, could help turn xylose into ethanol.

“The ‘packers’ yeast loves to eat glucose. And it can grow on xylose, but it won’t ferment it,” Haase says.

But the big surprise came when the researchers decided to feed xylose to C. tenuis as a control. It, too, failed to ferment the stuff.

“Max dug further, and showed that the belief that this clade of yeast species fermented xylose was due to the misidentification of three yeast strains back in 1984, before our standard DNA-based identifications were a routine thing,” Hittinger says.

The new study proposes transferring C. tenuis to the Yamadazyma branch of the yeast family, and, well, dumping it from the list of prospective biofuels producers.

“The yeast strains that can ferment xylose are actually a completely different species,” Haase says. “It’s was kind of disappointing from a biotech point of view, but it clarifies how that rare this xylose fermentation trait is amongst yeast species.”

“Once you knock out this one oddball species that was mislabeled decades ago, it really changes your whole perspective,” says Hittinger. “This will help researchers focus on the few groups that actually do ferment xylose.”

Haase, who graduated this month with his bachelor’s degree in biology, will start a biomedical sciences Ph.D. program in the fall at New York University. But he still has some work

to do in Hittinger’s lab.

“We probably have a few dozen new species, many of which Max has actually identified,” says Hittinger. “There are so many that we found a Latin consultant, so we can get our grammar right when we name them.”

That part of the process is less tricky than the culturing, genetic barcoding and detective work when things don’t go as expected.

“They usually come from a unique sample and a unique place, so it’s easy to get started thinking about what you’d name it,” says Haase, who also found the ”Packers” yeast in a sample in he collected last year in Wayalusing State Park. “When I decided I’d like to give this species a name that said something about Green Bay, the rest was pretty obvious.”