Home » Geology » From the bottom up: Researchers explore a most dangerous fault

Seismologists cannot predict earthquakes today, but understanding the physical properties of rocks in fault zones may some day improve the situation. We spoke with Tamara Jeppson, a UW-Madison Ph.D. student, during her 62-day stint with International Ocean Discovery Expedition 362, which is studying what led to the deadly Indonesian tsunami in 2004. The expedition ended Oct. 6. 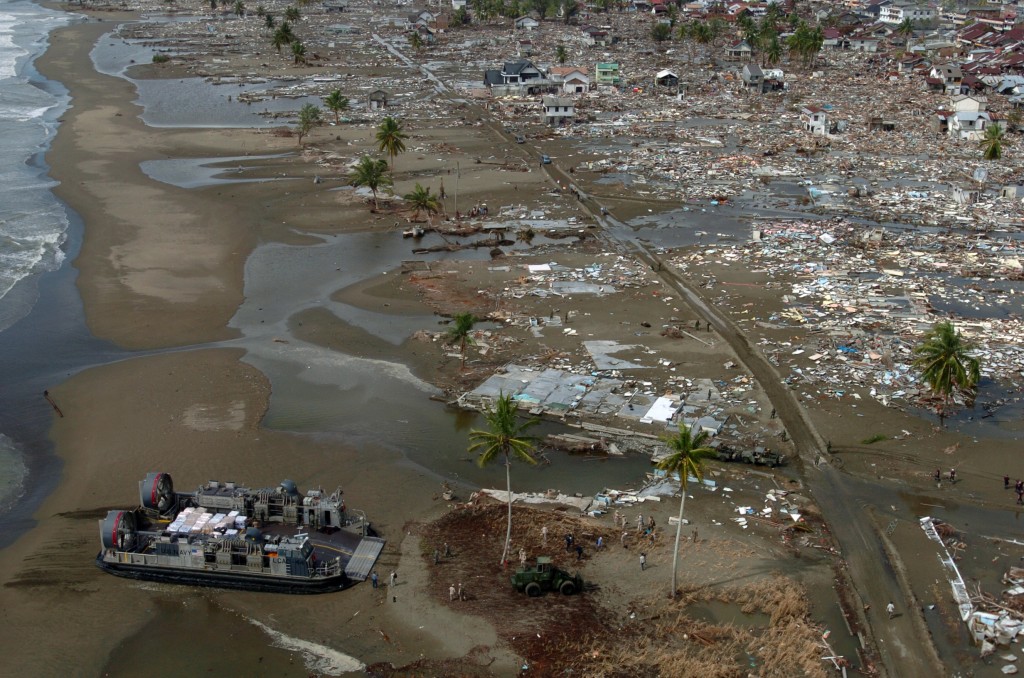 In Sumatra, Indonesia, the catastrophic 2004 tsunami killed about 230,000 people, in one of history's most deadly natural disasters. In the aftermath, a U.S. Navy hovercraft delivered supplies to Meulaboh, Indonesia. In fall, 2016, the drilling ship JOIDES Resolution extracted rock cores from the submarine fault where the massive earthquake caused the tsunami. Quakes occur when stress is suddenly released as portions of Earth’s crust grind past each other. Seismologists cannot predict earthquakes today, but understanding the physical properties of rocks in fault zones may some day improve the situation. U.S. Navy 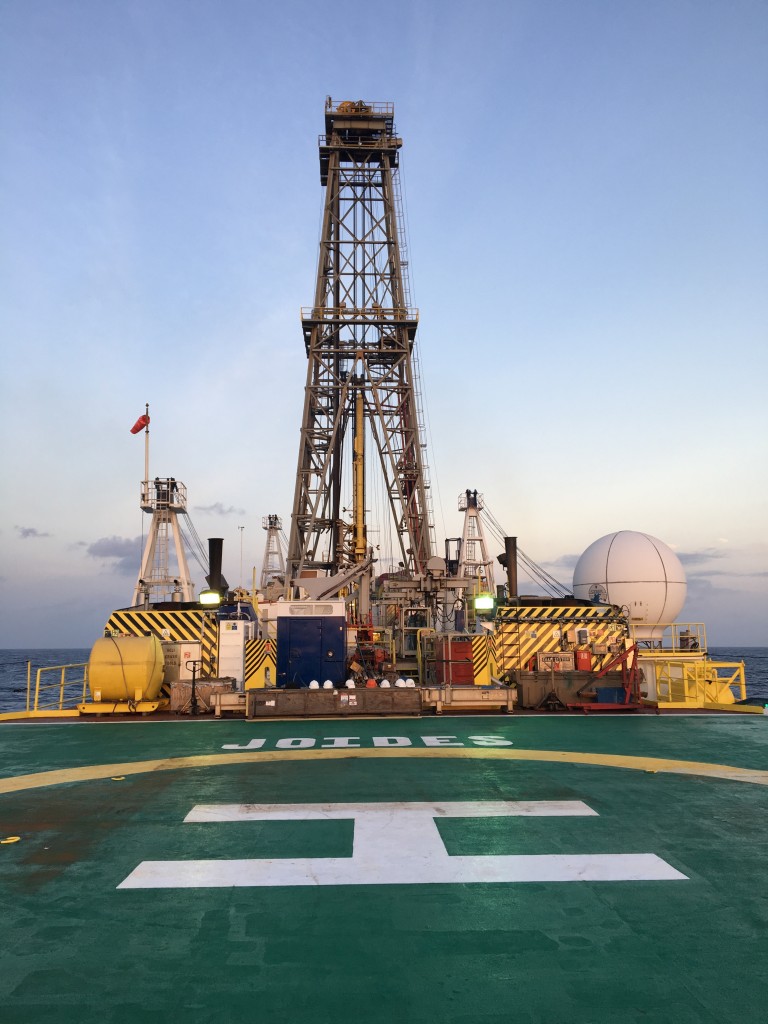 Geologic cores and oil wells both require a drilling crew – called “roughnecks” on land – to assemble and disassemble the string of drill tubes as it is hoisted by the derrick. The top of the derrick on JOIDES Resolution is about 66 meters above the water line. Katerina Petronotis/IODP-JRSO 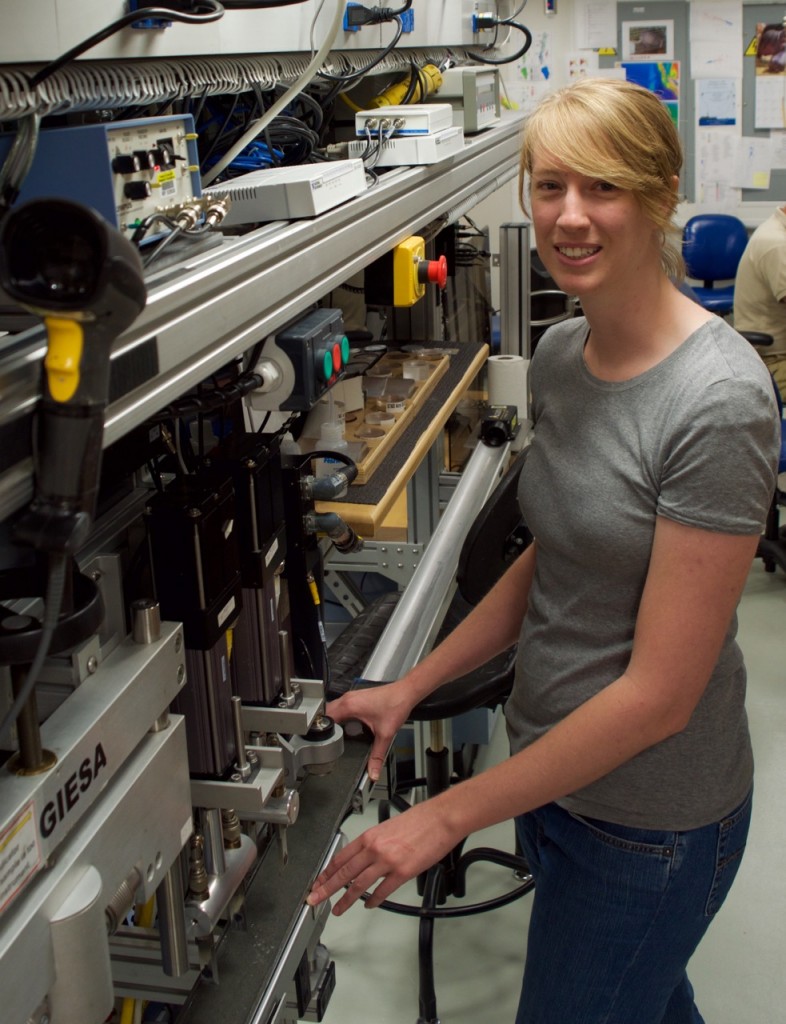 The PA’s “Core on deck!” summoned Jeppson, a “physical property specialist,” to the room where cores were first examined on JOIDES Resolution during the mission to the Sumatra subduction zone. “We are drilling into the tectonic plate that is being subducted beneath Sumatra,” said Jeppson, a student with Harold Tobin, a professor of geoscience at UW-Madison. Jeppson credits a childhood in Utah as “a big part of what got me interested in geology. There are more features of geologic interest, faults, different formations.” Jeppson said most of the crew (from Indonesia, China, Japan, Korea, the United Kingdom, Germany, U.S., France, Australia, India, Brazil and Italy) started as strangers. “Usually, unless we have sailed together before, we didn’t know each other, but people get along; we’re learning together.” Naomi Barshi, JOIDES Resolution 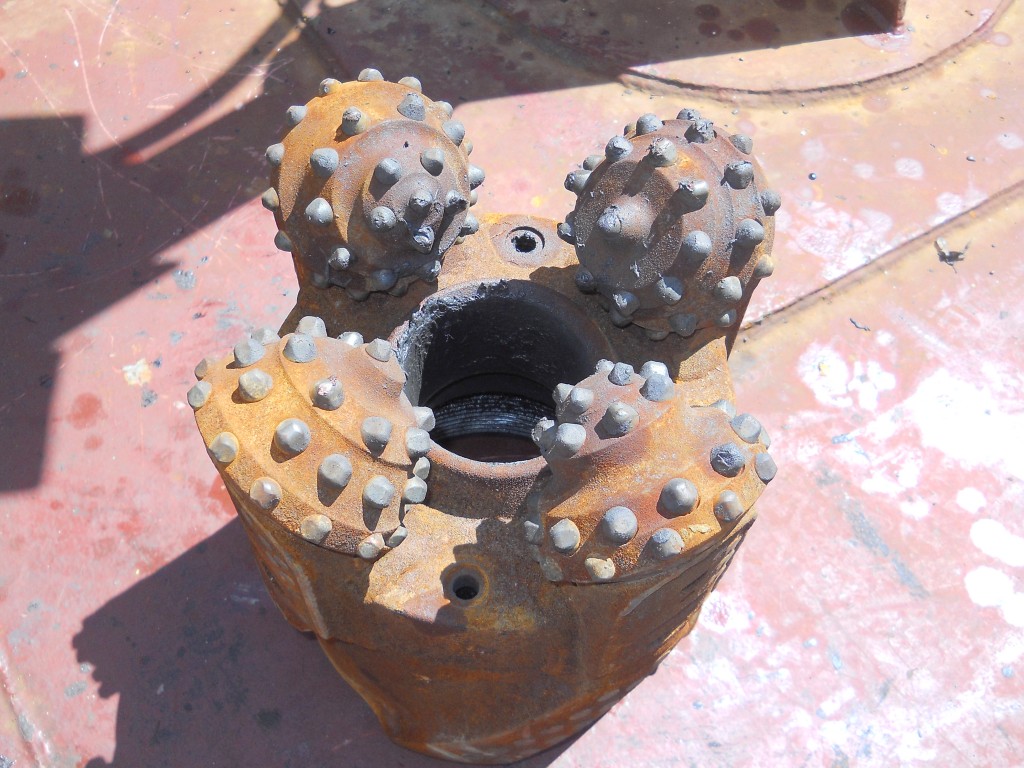 Churning day and night, this hollow roller-cone coring bit is the working end of JOIDES Resolution. Cores were extracted from the seabed from rocks that were inching across the 250-kilometer distance to the Sumatra subduction zone. Before the sedimentary rocks reach the fault zone (in about two million years), they will be deformed, heated, pressurized and changed, said Naomi Barshi, education and outreach officer on Resolution. Once on land, the cores will undergo deeper analysis – such as being stressed to simulate conditions in the subduction zone. The basic question, Barshi says, is this: “What are the conditions that will make it possible for an earthquake to happen once these sediments reach the level where earthquakes happen? We get to see the reality, the ground truth.” Tamara Jeppson/UW-Madison 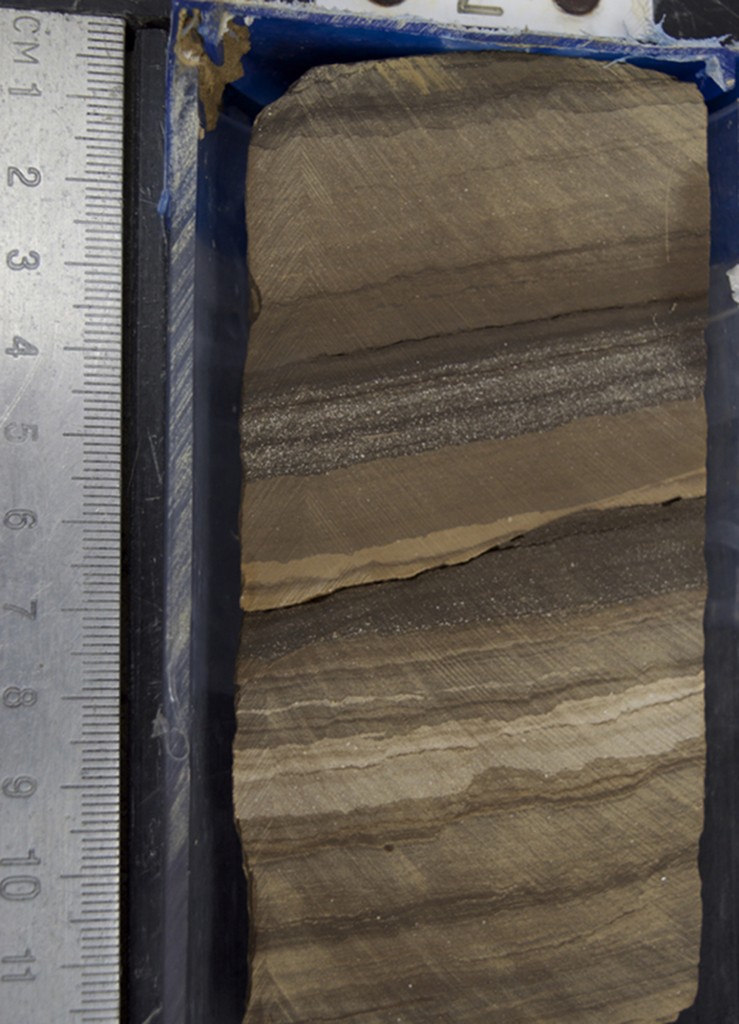 This core was sawed to show layers of mudstone, siltstone and tiny faults, from the Sumatra drilling. “When a core comes up, we are some of the first people to deal with it,” says Jeppson. After the plastic liner is opened, “We start measuring density, porosity, wave propagation velocity and gamma radiation to help us understand the composition of rock and how faults may propagate through it.” The cores brought up sand from the Bengal-Nicobar fan system, an enormous apron of sediments that washed down 2,500 kilometers from the Himalaya, says Barshi. Conventional wisdom says that shallow rocks in a subduction zone will be weak and should move by harmless creep rather than earthquake, but that "wisdom" may be wrong. “At Sumatra, we think that processes occurring at depth in sediments on the incoming plate may cause the rocks to become stronger,” and therefore more prone to sudden failure -- to earthquake. Naomi Barshi, JOIDES Resolution 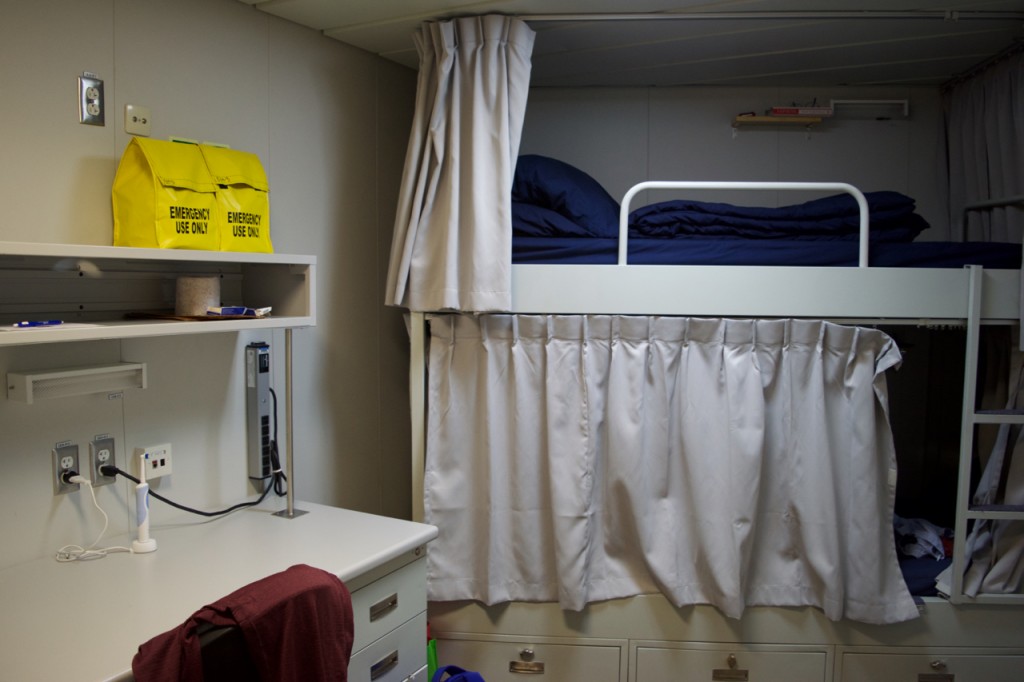 The two-person cabin on Resolution is a haven after a 12-hour shift. “When I tell people what I’m doing, Most people think it's pretty cool,” says Jeppson, “but sometimes they think it’s a little weird to live out here on the ship, and not see land for months.” Naomi Barshi, JOIDES Resolution