Home » Geology » Tales from the volcano: When will it erupt?

Panorama of a bay on Laguna del Maule, Chile. The entire landscape is the creation of about 50 eruptions in the past 25k years. Photo: David Tenenbaum, UW-Madison. (Pan the enlargement to each side.)

When you’re doing field research at the end of the earth, you count on the unexpected. Essential tools like drills fail when a replacement is 100 miles away. People get sick, blunder or descend into bickering.

But if you are working in the Andes Mountains, one thing you would not ordinarily worry about is having your plans bollixed by terrorism in West Africa. But that’s what Brad Singer faced in January 2016, when the UW-Madison geoscience professor led another expedition to Laguna del Maule, in the Chilean Andes. 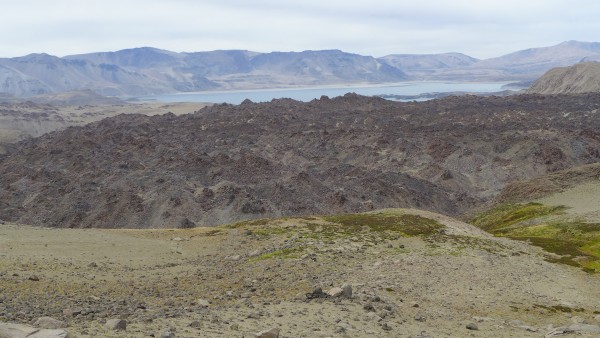 The landscape at Laguna del Maule is dominated by large lava flows like the one in middle distance. Credit: David Tenenbaum, UW-Madison

The foray was the centerpiece of a five-year National Science Foundation project to explore one of the planet’s most active and dangerous volcanic sites.

Here’s one statistic: A broad swath of the volcanic basin has been rising about a foot per year for nine years straight. Nothing close to that is happening elsewhere on Earth, at least among the places visible to a satellite.

The only realistic explanation is an upsurge in molten rock – exactly the kind of process that can lead to an eruption. 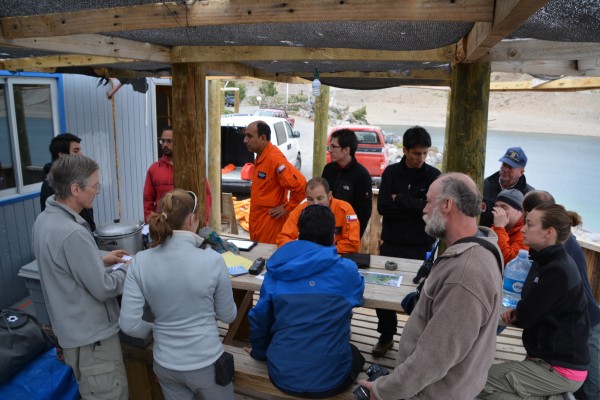 With his research crew arriving daily, Singer had a quarter-million dollar contract for helicopter time to ferry scientists and geophysical instruments to the remote reaches around the lake. “We had 20 people from Canada, the U.S. and Chile, and we were starting to uncrate equipment and put it together.”

Singer wasn’t thinking about the legendary Dakar auto rally, which was moved to Argentina in 2009 to avoid armed upheaval in Mauritania. But the heli company in Santiago was: it had a lucrative contract to film the rally, and did not want to spare the chopper that Singer needed to access remote instruments on the vast volcanic field.

After tense conversations in Spanish and English, Singer finally prevailed, and in one week the geologists set out 25 seismometers across the 150-square-mile volcanic field. One went on a steep ridge that, “Even goats would die trying to reach,” Singer says. 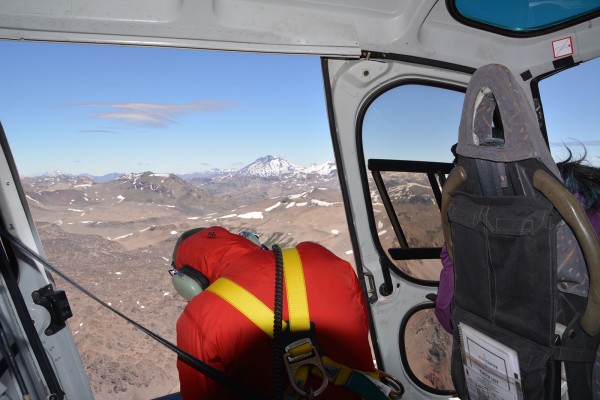 Angie Diefenbach of USGS shoots photos to support an ultra-precise topographical map. . The lava flow in the middle ground is the Rhyodacite of Colada Dendriforme created by an eruption 4,400 years ago. On the horizon to the west is 3612-meter Volcan San Pedro. Photo: Brad Singer, UW-Madison

Eight hours of air time (at $2,000 per) were devoured as Angie Diefenbach of the U.S. Geological Survey’s Volcano Disaster Assistance Program surveyed the area to create a digital topographic map with hairsbreadth accuracy measured in millimeters. “Angie was hanging out the open door on a harness with her feet on the skids for hours at a time,” Singer says, while the chopper flew rounds in a temperature of about 0&deg; F.

Scientists installed seismometers to measure the earth movement – subtle and otherwise – that sometimes can foretell an eruption. 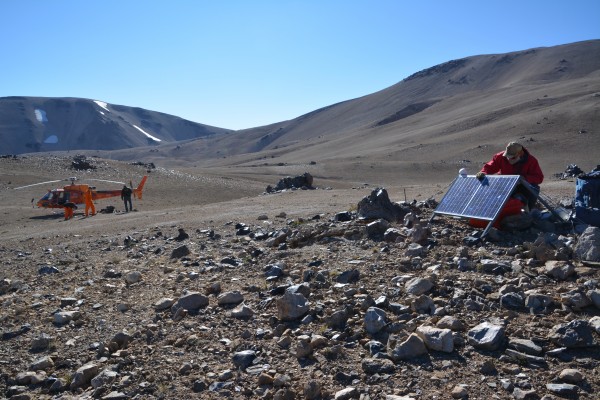 Barrancas, a mountain on the south side of Laguna del Maule, was one of the remote spots that required heli-help. The expedition installed 37 seismic stations in 2015 and ’16.

For his part, Singer calculated that an old shoreline above the lake had stopped forming 7,700 years ago when the lake level plunged after a natural dam gave way. Logically, a shoreline must form in a horizontal position.

Another level of logic: the slope Singer and his team measured on this shoreline today must be due to uplift caused by a massive underground injection of molten rock — magma.

Since the shoreline is much younger than the previous calculations, the magma injections must have been faster than previous estimates.

Laguna del Maule has erupted at least 50 times during the last 25,000 years. Some of those eruptions were 20 times larger than Mt. St. Helens, but nearby volcanoes have produced much larger, cataclysmic eruptions in the recent geologic past. The consequences could be grave downwind in the Argentine Pampas or even Buenos Aires, Singer says.

Volcano experts cannot predict eruptions. But Singer can say this: It’s possible that the ominous rise will one day just cease. But sooner or later, a future eruption in this explosive volcanic field is pretty much inevitable.