You expect volcanoes in the Aleutian Islands — one of the more remote parts of the subduction zones that encircle the Pacific Ocean and create the volcano-rich Ring of Fire.

Feral, menacing cattle? Not so much.

But Ninfa Bennington, an assistant researcher in the University of Wisconsin-Madison Department of Geoscience, and her research crew survived both during a recent three-week expedition to Okmok, a volcano with a 10-kilometer caldera located at 53° north latitude in the North Pacific. The team was there to learn more about this volcanic region and to study the potential for future eruptions.

A caldera is a ring-shaped structure formed after a volcano collapses during a major eruption. Often, as with Okmok, younger volcanic cones form inside the ring.

Okmok last erupted in 1997 and 2008. While nobody lives within 100 miles (aside from a few ranch hands during the summer), large eruptions in the Aleutians can hamper air transport between North America and Asia.

If your view of the Aleutian islands is all fog, all the time, that’s not far off, but Bennington says the crew enjoyed a bit of sun, and temperatures briefly soared past 60°, inside weeks of fog that hobbled transport and work.

The research crew, including collaborators from Scripps Institution of Oceanography at UC San Diego, the Alaska Volcano Observatory and the U.S. Geological Survey, placed instruments in and around the caldera to monitor ground movement and electrical conductivity underneath.

“We put in a temporary array of seismometers that will sit there for a year, recording ground shaking,” says Bennington, principal investigator for the project. These, combined with permanent seismometers, will measure magma (molten rock) in the upper 8 kilometers of Earth’s crust.

A second set of instruments studies how Earth’s electric and magnetic fields are conducted through Earth, Bennington says. “Melts are incredibly good at conducting electricity, so this is an ideal tool to characterize how magma is distributed.”

The electromagnetic instruments, located on the volcano and the nearby sea floor, should be able to detect molten rock down to a depth of 125 kilometers. The volume and movement of magma are major factors in determining when and how strongly a volcano will erupt.

Collecting and analyzing data will take several years, Bennington says. “Our job is to fill in big blank spots in our knowledge of the Aleutian volcanoes, and this takes a long time — and lots of work.”

Looking at the pix, we had to ask, ” Is this as much fun as it looks?” “It’s more fun,” Bennington said. “Pictures never do it justice; they look amazing, but to be there! It’s such a wild job! Most of the time, we are sitting at computers, but once a year, if you are lucky, you get to jump in a helicopter and climb around volcanoes.”

And try to stare down feral cattle! 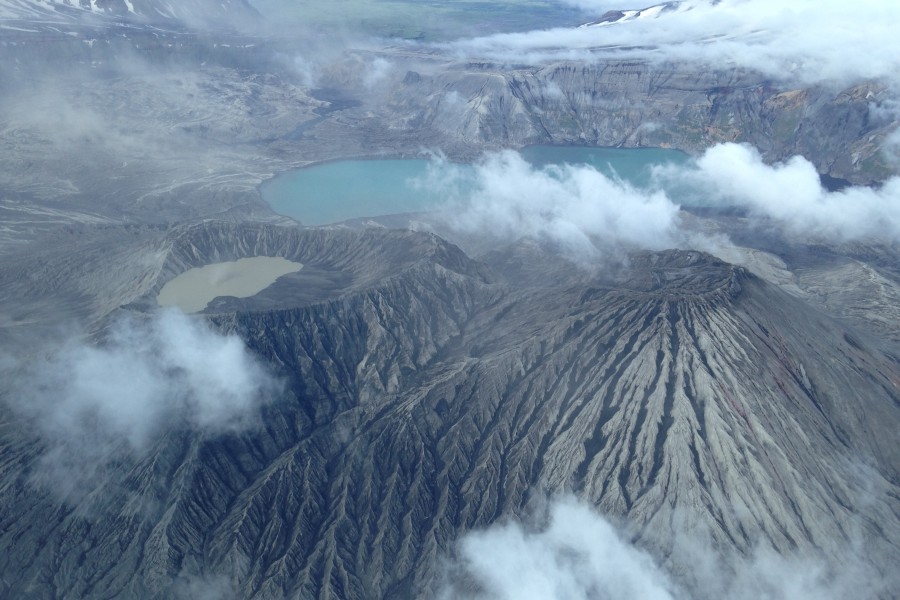 Close up of volcanic cone D (right) and new cone from the 2008 eruption, Ahmanilix (left). 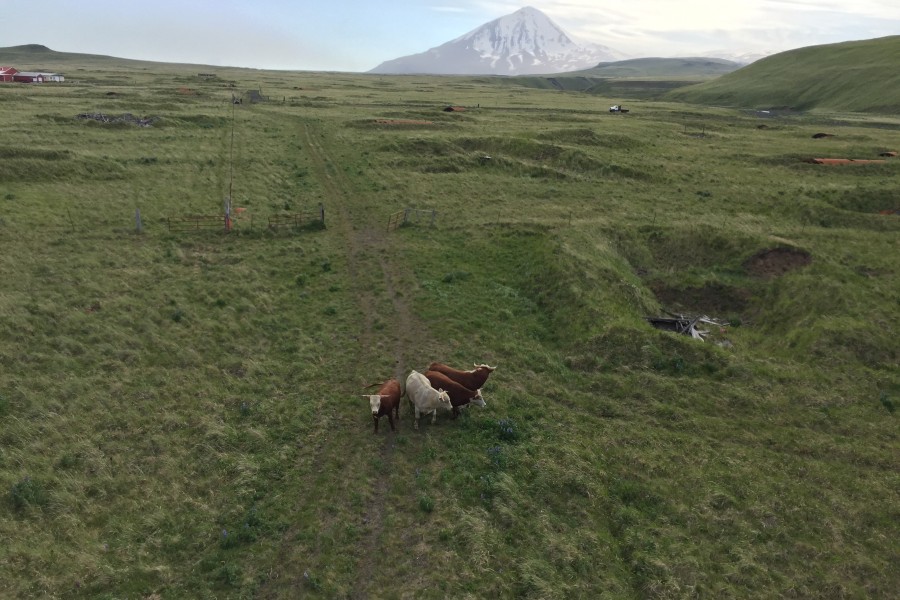 Feral cattle are raised for the organic market on Okmok 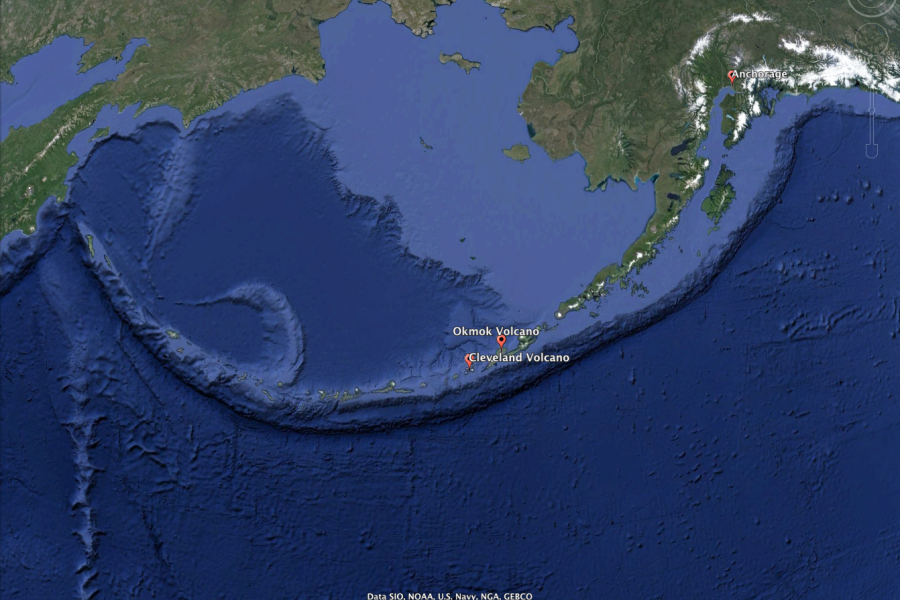 Okmok's location in the Aleutian chain. Nearby Cleveland volcano is now erupting. 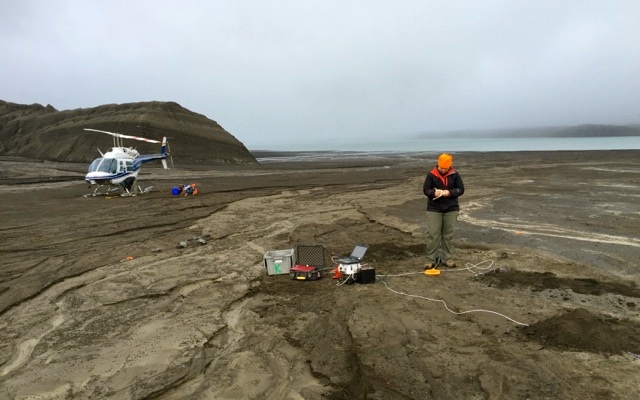 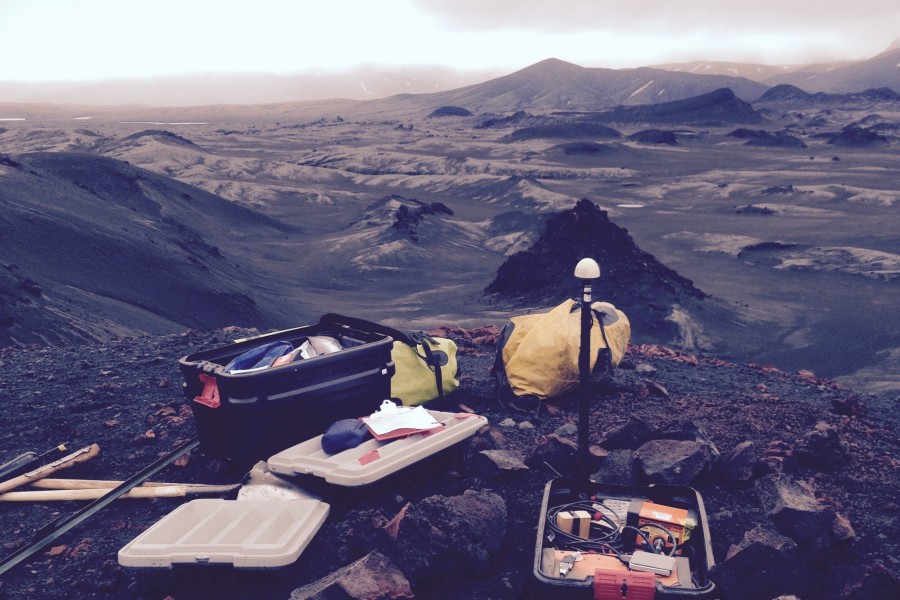 This photo was taken midway through installation of a seismic site on a foggy day when working in the caldera, Bennington says, felt like working on Mars. 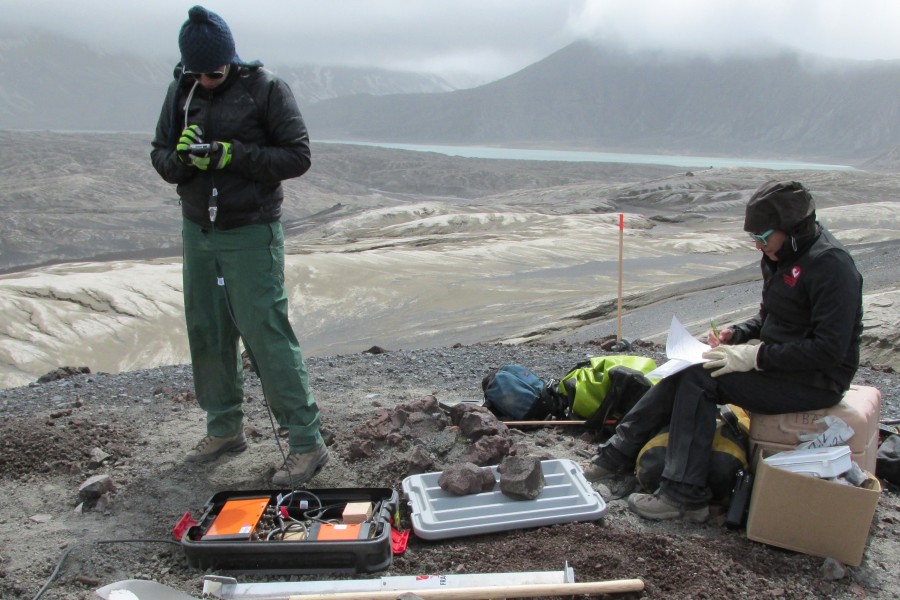 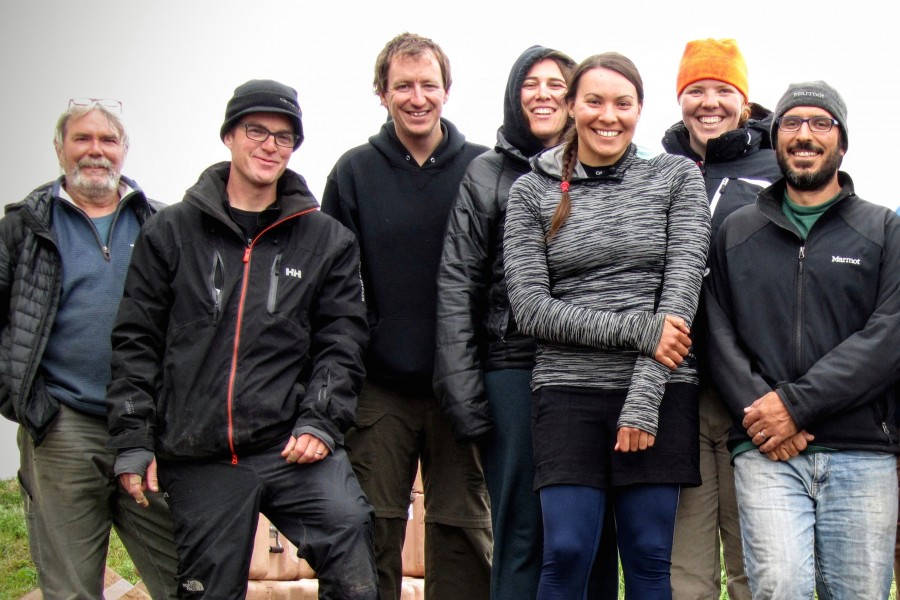