Home » Geology » What’s next for the Kilauea volcano?

Since May 17, when this blog story was posted, the fissures that opened up in the Kilauea volcano’s Eastern Rift Zone have begun spewing rivers – yes, rivers of lava – out of the ground and towards the Pacific Ocean.

According to the United States Geological Survey, some of the central fissures are producing “lava fountains,” and are the source of the most explosive activity. “Elevated earthquake activity” continues as well. Small explosions continue to emit ash from the summit. One man was reportedly hit by a “lava bomb,” – a flying glob of lava and molten rock –while trying to defend his home from the lava.

And to make things even more interesting, the burning methane from buried vegetation is creating blue flames streaking along the Earth. Watch the video from the USGS below.

The eruption is expected to continue, with additional ground cracking and lava emissions.

The Kilauea volcano, situated 4,000 feet above sea level on Hawaii’s Big Island, emerged from the ocean around 100,000 years ago. Now, the volcano is currently experiencing its first explosive eruption since 1924.

Although the volcano has been actively erupting on a smaller scale for three decades, earlier this May, fissures began to open up in the ground around the residential neighborhood of Leilani Estates along the island’s southeast coast, spewing molten lava across yards and into sleepy vacation homes, forcing the evacuation of 2,000 residents.

Preceded by several small earthquakes, the early stages of the latest eruption caused more than 15 fissures to break open in the volcano’s Eastern Rift Zone, which sits underneath the Estates. According to Hawaii Public Radio, the lava covered 100 acres of land and destroyed 30 homes.

On May 16, a small ash cloud appeared from the Halemaumau crater on Kilauea, prompting the USGS to warn airplanes in the area that routes above the volcano are now too dangerous for air traffic. An “ash fallout” warning went into effect, to urge residents in the path of the ash cloud to take shelter.

And today, May 17, an explosion from the Halemaumau crater before dawn sent an ash cloud into the air, reaching as high as the cruise altitude of a passenger jet, about 30,000 feet. The volcano also began ejecting “ballistic rocks,” some the size of microwaves. On May 9, the Hawaiian Volcano Observatory reported that eruptions could send rocks up to the size of automobiles flying into the air around the volcano. 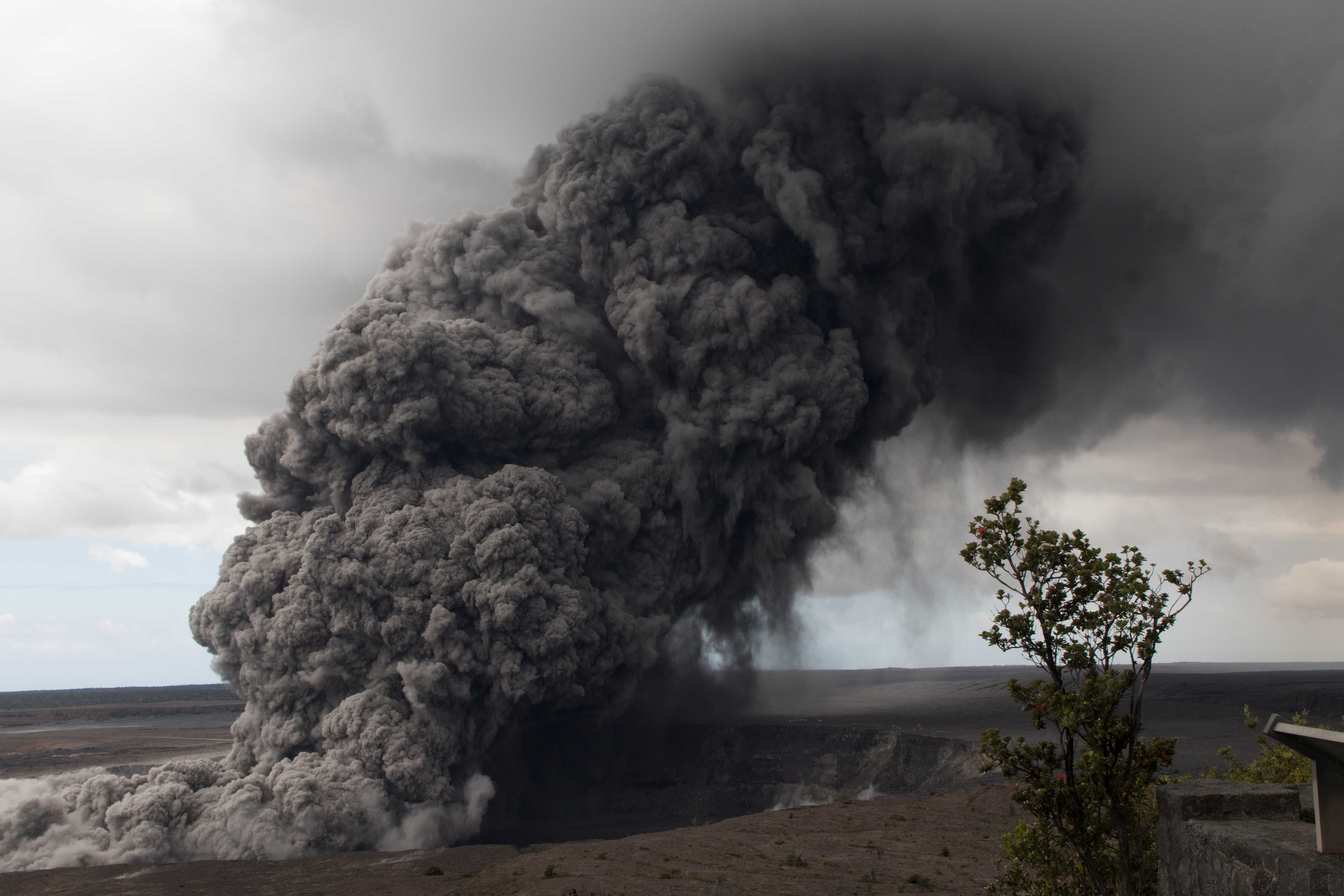 Photo of the ash cloud from the Halemaumau crater. Photo from USGS.

All of these signs point to a much larger eruption event on the horizon.

“It’s been a long time since we’ve had anything like this,” says Shane Hubbard, a researcher with the Space Science and Engineering Center at the University of Wisconsin Madison, who has 15 years of experience working during disasters and evacuating residents, like the flooding in Iowa in 2008. His research focuses on spatial decision making during and after disasters.

“There aren’t any preventative measures to keep the hazard out,“ Hubbard says of the lava that is bulldozing the southeast areas of the Island. “You know hurricanes, wind, all these things you can come up with measures. You can put shutters on your windows, you can put a sandbag wall up.”

A lava flow oozing from a fissure in Leilani Estates. Photo from USGS.

But the physical structure of the volcano complicates the risk management strategies. Kilauea is what is known as a “shield volcano,” elongated and more gently sloping than the conically shaped volcanoes that exist in subduction zones, where two tectonic plates are colliding and thrusting the Earth upwards.

Kilauea is situated within Hawaii Volcanoes National Park, a 505-square mile area ranging from sea shores to the summit of Mauna Loa, another active volcano on the island, whose summit rises to 13,000 feet above sea level.

The elongated shape of it causes the flanks of the volcano to be more brittle, creating rift zones like the one resting underneath Leilani Estates. In these areas, the ground gets pulled apart and magma finds its  way to the surface, instead of traveling to one exit point.

The fissures have also been leaking sulfur dioxide alongside the lava, a colorless gas that is harmful to humans and can cause acid rain. Residents can smell a slight stench of rotten eggs, indicative of the sulfuric gas in the air.

According to Michael Pavolonis, a National Oceanic and Atmospheric Administration scientist at the Cooperative Institute for Meteorological Satellite Studies in Madison: “The gas emissions could increase in response to the opening of new fissures.”

Pavolonis says that the situation is currently being monitored using ground-based and satellite instruments.

The unstable rift zones have been the focus thus far in the eruption, which began 12 days ago. But at the Halemaumau crater atop the Kilauea Volcano, the “lava lake” has been dropping down into the ventilation shaft underneath it, potentially causing a blockage that would cause pressure to build, leading to a more violent release than we have yet seen. Activity like this may have caused today’s early morning explosion.

The USGS warns that at any time, activity at the volcano may become more explosive, increasing the intensity of ash emissions and ballistic projectiles from vents.

“The question is, what is going to disrupt what’s happening and cause it to either stop, or get worse?” says UW-Madison seismology professor Cliff Thurber, who first studied Kilauea in 1983. His research began on the same day that the current 35-year stretch of eruptions at Kilauea began.

The current eruption is one of the few from Kilauea that has affected areas this far away from the summit, Thurber says, and for unknown reasons. That is why these series of eruptions have been more destructive, because they have made their way into neighborhoods and residential areas, whereas others have stayed away from populated areas.

There have been no deaths or injuries reported during the eruptions thus far.

On a lot of residents’ minds are the lava flows crawling across the landscape onto their properties. But, unfortunately, for those that now have lava on their doorstep, cleanup is out of the question.

“You can’t clean up (the lava),” says Thurber. “When we’re talking about meters of fresh, sharp lava. You can’t build on it, you can’t do anything with it until hundreds of years pass by and nature restores itself.”