This summer, I started running. Partly because it seemed healthier than lifting, but also because summer gym memberships are expensive. However, being an inexperienced runner, and balancing multiple jobs, I often went for runs at odd times, like at night or on days where the heat index topped 100 degrees.

I once went for a run on a day so hot that I came down with heat exhaustion — leaving me in an extremely weakened state. In addition to this weakness, I quickly began to show symptoms of mono in the following days, and my symptoms persisted for close to four weeks. To learn more about my illness, I spoke with Eric Johannsen, a University of Wisconsin–Madison professor of medicine that studies the Epstein-Barr virus behind the symptoms of mono.

Infectious mononucleosis, better known as mono, is an extremely common disease that overwhelmingly infects adolescents and college-aged adults. With a new semester — and new opportunities for mono to spread — upon us, Johannsen shares some insight into this scourge of college campuses.

“The most important thing to keep in mind with Epstein-Barr is it’s a herpes virus, so they do establish lifelong infections,” says Johannsen. “They’re able to do that because they enter the nucleus of the cell and establish themselves as episomes.”

Episomes are strings of foreign, circular DNA that replicate independently inside of a host cell. EBV can trick the host cell into replicating its episome and then hitch a ride on the host chromosome when the cell divides.

Since EBV is a member of the herpes virus family, it shares common elements with its notorious kin. Not only does the virus remain within the host for their entire life after infection, but it can also reactivate, just as the chickenpox virus can later reactivate to cause shingles. And like other herpes viruses, EBV is one of the most common infections around the world.

Mono infection is most commonly transmitted through saliva — mostly through kissing but also through shared glasses or intense coughing— which is partly what makes it so common among college students.

But what does mono typically look like in patients? According to UW–Madison Chief Health Officer William Kinsey, students commonly see headaches, sore throat, and a fever that gradually gets worse over time.

“Unfortunately there are students that are sick for two, three or even four weeks when they get mono,” says Kinsey.

When looking to prevent the disease, he advised that students focus on washing their hands, adding that “it really works to prevent the spread of viral diseases.”

And EBV infection is an incredibly common disease, with up to 95 percent of adults carrying the virus, according to Johannsen. In fact, all herpes viruses are widespread — the chickenpox (varicella) virus reached a peak of four million people per year before the vaccine was released in 1995. Since then, varicella incidences have declined by 79 percent.

For the herpes virus family, vaccines are only available for chickenpox. Researchers are working to develop an EBV vaccine but have to contend with possible side effects.

“The problem with EBV is there is a very low chance it can cause lymphomas, and its associated Hodgkin’s disease,” says Johannsen. Since the virus is technically a carcinogen in its live form, Johannsen explains that “no one is going to make a vaccine with a live attenuated virus,” for concern it might trigger cancer. 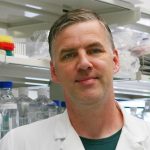 Eric Johannsen, M.D. is a Virology Program Member at the Carbone Cancer Center. Photo by the McCardle Laboratory for Cancer Research.

If you think you may have mono, it is important to get tested to confirm its presence, as the symptoms involved with the disease are similar to other health complications like strep throat, HIV infection, and other herpes viruses.

There are a few different ways to test for mono. The most common test used is the mono spot test, though it isn’t perfect.

“If the mono spot test is positive, we’re done, and we can say you have mono,” says Johannsen. “But if its negative, we’re not done — you can’t rule out having the disease.”

Because of this imperfection, the United States Center for Disease Control does not recommend the spot test for general use. Another test commonly used is a blood antibody test, in which a blood sample tested for the presence of antibodies against EBV.

Testing often isn’t done until after a week or two of symptoms are seen, so it’s important to be prepared in case you do end up missing considerable amounts of work or school.

When I first began showing symptoms, my doctor thought it was strep throat. At the time this was the only symptom I was showing, but things quickly worsened and before long I had every symptom in the book: exhaustion, chills, high fever, swollen lymph nodes, and a lack of appetite. I ended up losing close to 20 pounds just from having mono, and my doctor told me my experience was fairly typical.

Johannsen adds that a vaccine that limits the symptoms of mono could be useful.

“I think the bigger challenge is that because EBV-associated cancers are so rare, if you can give a vaccine that allows you to handle primary infection better, that’s probably a legitimate reason to make the vaccine,” he says. “We think it could also further reduce the rate of cancer.”