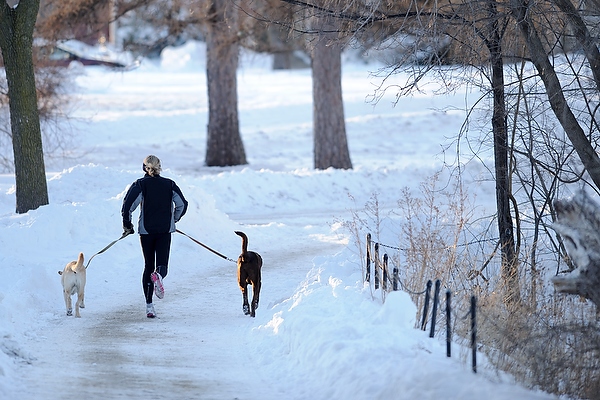 Home » Curiosities » Can running or being active outside in winter harm your lungs?

On Feb. 2, 2011, a woman and her two dogs run along the Howard Temin Lakeshore Path at the University of Wisconsin-Madison following a major winter snowstorm. //Photo by Jeff Miller, UW-Madison

It’s winter. It’s cold. Some days here in Madison lately haven’t seen the positive side of the thermometer. Yet, many of us – myself included – still find ways to enjoy being active outdoors: running, cross-country skiing, snowshoeing, hiking, walking, cycling.

When a colleague recently brought up the notion that running outside in winter can harm your lungs, I decided to ask Google. The results, it seems, were mixed, and few of the top hits were reliable sources. 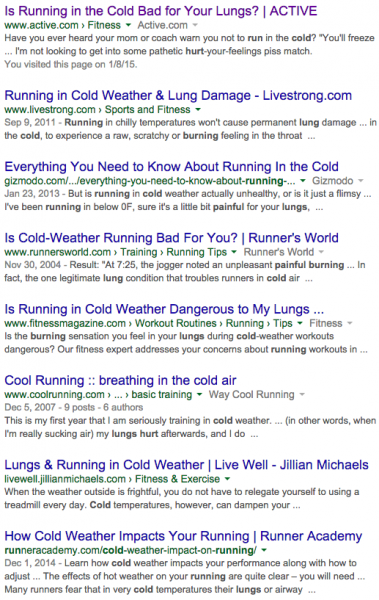 So, I went right to the source, seeking help from UW Health’s Gian Galassi. We asked Jude Sullivan, senior clinical exercise physiologist with the UW Health Sports Medicine Fitness Center, and Bryan Heiderscheit, director of the UW Runners Clinic, this question: Can being active outdoors in winter damage your lungs?

It turns out, their responses were mixed, too.

Sullivan says: “Generally speaking exercising in extreme cold weather is an issue that can cause more distress to the outside of the body (e.g. frost bite) rather than the inside.”

He gives two exceptions: people with coronary artery disease and people with sensitive or reactive airways.

According to Sullivan, research published in the Canadian Journal of Cardiology has shown that extreme cold temperature can lead to reduced blood flow in people living with coronary artery disease, which is marked by the build up of plaque in the arteries that supply the heart muscle with oxygen-rich blood.

“What this means is that exertion that is well-tolerated in normal temperatures could place one in a less safe physiological state while performing a similar activity in extreme cold,” he says. This can lead to chest pain or even heart attack for people with the condition. 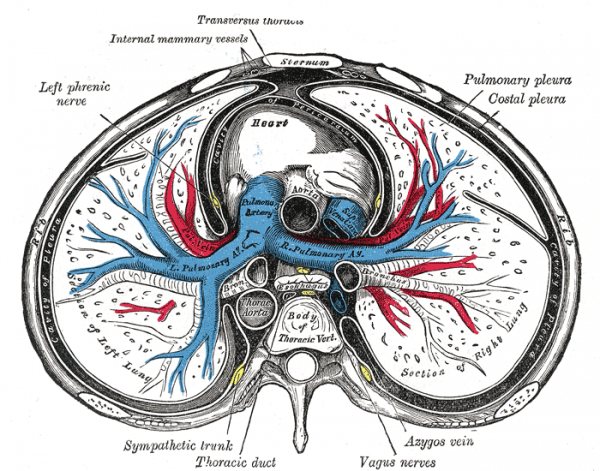 A cross section of the lungs, from the top down.//Photo from Wikimedia Commons

People with difficulty breathing may find it hard to exert themselves in extreme cold, Sullivan says, and in addition to being sensitive to other elements in the environment – scents, odor, dust, etc. – the cold could also trigger bouts of coughing and wheezing for people with reactive airways.

“In either case, it is important for an individual to recognize their health status and how their environment can either enhance of hinder their sense of well-being,” Sullivan says.

On the other hand, Heiderscheit doesn’t single out just two exceptions. His response is applicable to a broader range of people.

“Running or other forms of endurance exercise on cold winter days can be a real irritation to the lungs.” Heiderscheit says. “Exercise-induced bronchoconstriction [also know as exercise-induced asthma] is a common response to exercising in cold, dry air, with symptoms including: wheezing, shortness of breath, cough or chest tightening during or after exercise.”

Occasional exercise in cold, dry air may only produce temporary symptoms (if any), Heiderscheit says, and people with asthma or other lung conditions may be affected more. Repeated or prolonged exercise in cold, dry weather, however, can “create a significant environmental stress to the upper and lower airways, possibly leading to respiratory symptoms and injury.”

“Using a thin scarf or mask to cover the mouth and nose to capture the exhaled water vapor may help to minimize the problem,” Heiderscheit says.

So in other words, you’re more likely to experience trouble if you have a condition like coronary artery disease, asthma or if you have sensitive airways. Prolonged and repeated physical activity in extreme cold might lead to respiratory symptoms and even injury, but being active outdoors is more likely to cause trouble for the outside of your body than the inside. Whenever possible, use a thin scarf or mask to help trap exhaled water vapor and heat.

Winter exercise can be incredibly rewarding. Just remember to be safe!