Leukemia is one of the most common cancers of childhood. So, as childhood cancer awareness month comes to a close on this almost final day of September, we wanted to take a moment to help explain a groundbreaking new FDA treatment – CAR-T cells – that offers hope to children with a form of relapsed pediatric leukemia called acute lymphoblastic leukemia, or ALL.

What are CAR-T cells and why do they hold so much promise? Two of UW Carbone Cancer Center’s experts, Peiman Hematti, MD and Christian Capitini, MD, help explain:

A very simplified look at the immune system

In its most general form, the immune system is comprised by many different types of cells, including B cells and T cells. These cells work together to identify “self” from “non-self” (such as a cell that has been infected by a virus or a cancerous cell) and rid the body of them. And because we can be exposed to millions of different non-self particles, or antigens, our immune system has millions of B and T cells that each recognizes a specific antigen. 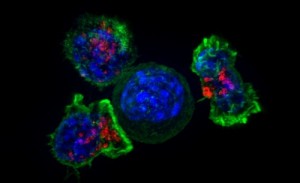 When T cells recognize and bind a cancer cell, the T cells are activated to kill it. Source: NIH/Flickr

B cells secrete antibodies that recognize specific antigens. If that antigen is on the surface of a tumor cell, that cell is flagged for destruction. T cells exist in many forms, some of which kill targeted cells directly. However, T cells need to have the antigen presented in complex with a self molecule called HLA in order to recognize and kill cells.

Before we put the CAR-T before the T cell, let’s talk T cells and treating blood cancers

The role of T cells in fighting blood cancers like ALL has been realized for some time now, ever since bone marrow transplants have been used as treatment. In these transplants, immune system cells from a donor are given to the cancer patient, where those donor cells recognize and kill the “non-self” cancer cells. But a major complication can arise known as graft-vs-host disease (GVHD), where the donor’s T cells recognize the patient’s healthy cells as non-self and attack them.

“If we take away the T cells to avoid GVHD, the recipient’s leukemia will come back faster and more aggressive, so we know T cells play some role in anti-tumor immunity, but we also know they can hurt the patient,” Capitini says. “The question arose: Could you take T cells out of patients and genetically engineer them so they’re specific for the cancer and not attack normal host organs? That is the basis for developing CAR-T cell therapies.”

What is a CAR-T cell and why is it an improvement over bone marrow transplants?

CAR stands for chimeric antigen receptor, because the T cell contains a receptor that is a mash-up of an antibody and a T cell receptor.

“It’s a T cell that has the recognition of a B cell or antibody, but has the killing power of a T cell,” Capitini explains. “Using T cells alone means their receptors need to match the patients’ HLA, but antibodies are appealing because they can recognize any molecule on the cell surface.” 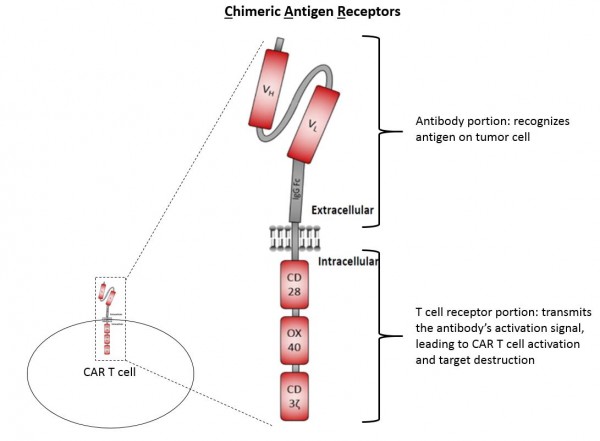 This dual receptor allows the antibody to recognize the tumor cell and then transmit a signal through the T-cell portion of the receptor, activating the T cell and instructing it to kill the target cell.

Adds Hematti, “These CAR-T cells, in many cases, are the patient’s own cells, so we do not see the typical symptoms of GVHD.”

ALL is a cancer of B cells. Cancerous and healthy B cells express a protein on their surface, called CD19. With the CAR-T cell treatment that was recently approved, a patient’s blood cells are harvested, the T cells are expanded and genetically engineered to contain a CAR that specifically recognizes CD19, then the cells are given back to the patient. In the recent trials, only patients who had relapsed or were not responding to other treatments were eligible.

“80 percent of patients are alive after one year compared to what is expected to be less than five percent without CAR-T cells,” Hematti said. “The thing about CAR-T cells, too, is that they are a living drug. The cells must form memory because the first child to receive the treatment has no detectable B cells five years after treatment. For now, it looks like an immunization, the T cells recognize if the cancer comes back and they get rid of it.”

Still, like any treatment, some people experience side effects and other risks, including severe complications from an immune response known as cytokine release syndrome, neurotoxicity and the loss of all their healthy B cells. And as many as 20 percent of patients do not respond to treatment because the cancer cells develop resistance by losing CD19 or through other mechanisms.

CAR T cell therapy starts with a patient’s own T cells, which are then genetically modified to express the CAR and are given back to the patient to fight their cancer. Source: Kite Pharma

What the future may hold for other types of cancer

“In addition to CAR-T cell therapy for adult lymphoma, which has been submitted to FDA for review, we are seeing more trials for other hematological malignancies,” Hematti says. “And while CAR-T trials for solid tumors have not been as promising yet, given the emerging data on the importance of T cells in treating solid tumors, the technology does hold promise for treating many cancer types.”

The biggest research and development questions facing CAR-T cells now are: 1) which cancer antigens should be targeted? and 2) can the production of the cells become more cost effective and efficient?

Adds Hematti, “This is the benefit of being more than just an academic medical center. We can take discoveries from the laboratory and develop them collaboratively for the clinic.”