This guest post comes to us from Jevin Lortie, a graduate research assistant in the Department of Nutritional Sciences at UW–Madison.

Just before Christmas last year, Grandma Barbara, or Ba as we affectionately call her, had finally decided to let us admit her to the hospital. She had come down with what she thought was pneumonia six months ago. She was weak, coughing and had fluid in her lungs. She had been getting progressively worse: her legs were swollen, and she had lost a lot of weight. These symptoms told us that she was actually suffering from heart failure, which is often confused with pneumonia.

By the time we got to the hospital, the concerned nurses scolded us for not calling an ambulance and whisked her to the emergency room. She was given a barrage of tests, many of which required fasting, so it was hard for her to get enough to eat during the day. I had recently joined a lab studying nutrition, and I started to worry about how her body was going to recover without enough food.

After a few days in the hospital, Ba was struggling to breathe on her own. The doctors decided she needed a breathing tube and to be put in a medically-induced coma. While unconscious, she could have been fed by either a feeding tube or IV, but it took several days for this to start. These both carry some risks and are currently only given if absolutely necessary. Yet science has begun to demonstrate that the benefits of immediate nutrition by tube-feeding may outweigh the risks. Hospitalized patients lose 1 to 2 percent of muscle per day. Therefore, a patient in the hospital for a month can lose over half of their muscle.

Nutrition does not get the attention it deserves in medical training, which makes problems like malnutrition — a lack of adequate nutrients — hard to spot. A 2006 study in the American Journal of Clinical Nutrition found that medical schools on average spend just 24 hours on nutrition, and only 30 percent have a separate nutrition course. Doctor and author Rupy Aujla says, “I’m often met with disbelief when I describe the mere 10 hours of lectures on the subject that I received during my five-year medicine degree.” A 2016 study by Marigold Castilo found that fourth-year medical interns answered only half of a series of basic nutrition questions correctly.

My new lab, led by Adam Kuchnia at the University of Wisconsin–Madison, is investigating new imaging techniques to help doctors assess nutrition earlier and more accurately so they can provide the best care for patients like Ba. Kuchnia believes this problem can be solved by modifying a technology that has been in use for years: ultrasound. “It’s an ideal modality for all patients, no matter what their condition is,” Kuchnia says.

Ultrasound works by using sound waves to create an image, which in our case shows the thickness of a muscle and if it has more fluid or fat than it should. Research is beginning to show that before there is a change in muscle mass, this fat and fluid buildup may be signs the muscle is beginning to break down. These early signs could allow us to identify muscle loss much sooner than it can be detected by physical inspection. 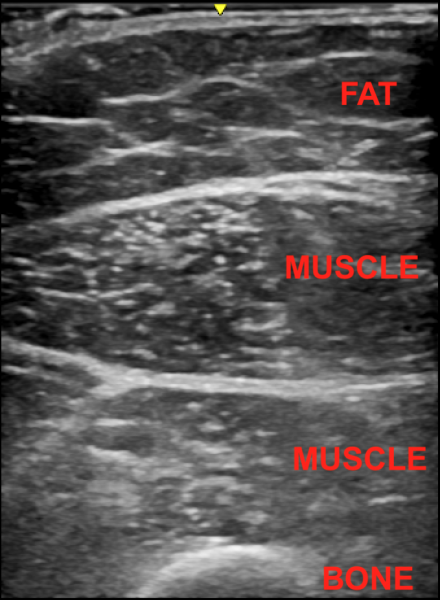 An ultrasound image showing the composition of a quadriceps muscle.

Identifying signs of malnutrition could help doctors evaluate whether to ask a patient to fast for another test or wait and eat dinner instead. Kuchnia wants to help clinicians with this decision, and our lab focuses on identifying and preventing malnutrition. Malnutrition is especially important during illness, as additional protein is needed to repair damaged tissues and fight infection. If adequate nutrition is not available, the body will use what is available— fat, muscle, and as a last resort, organ tissue. While stored fat can provide energy, it lacks the amino acids, the building blocks of protein, we need to build and repair cells. Therefore, if we aren’t eating protein, muscles must be broken down to help the body recover. “There are several definitions of malnutrition, but at the core of each one is loss of muscle, which is particularly bad for patients,” says Kuchnia.

Our lab’s next goal is to investigate ways to help patients when we see early muscle loss, such as more immediate tube or IV feeding or additional protein supplementation. Kuchnia says that this research “can be extended to benefit anyone. Through nutritional intervention we are hoping to maintain muscle health in order to lengthen years of quality life.”

In Ba’s case, she made an amazing recovery. But after being bedridden for a month, and a week of that spent fasting in a coma, she needed to re-learn how to do everything — including walking, dressing, and feeding herself. However, her recovery could have been helped by nutritional intervention that allowed her to maintain the muscle she had, instead of being broken down to help her body repair itself. Research from the Kuchnia lab may help implement changes in nutritional interventions, resulting in better patient success and quicker recovery times, preventing others from the same difficult recovery as Ba. 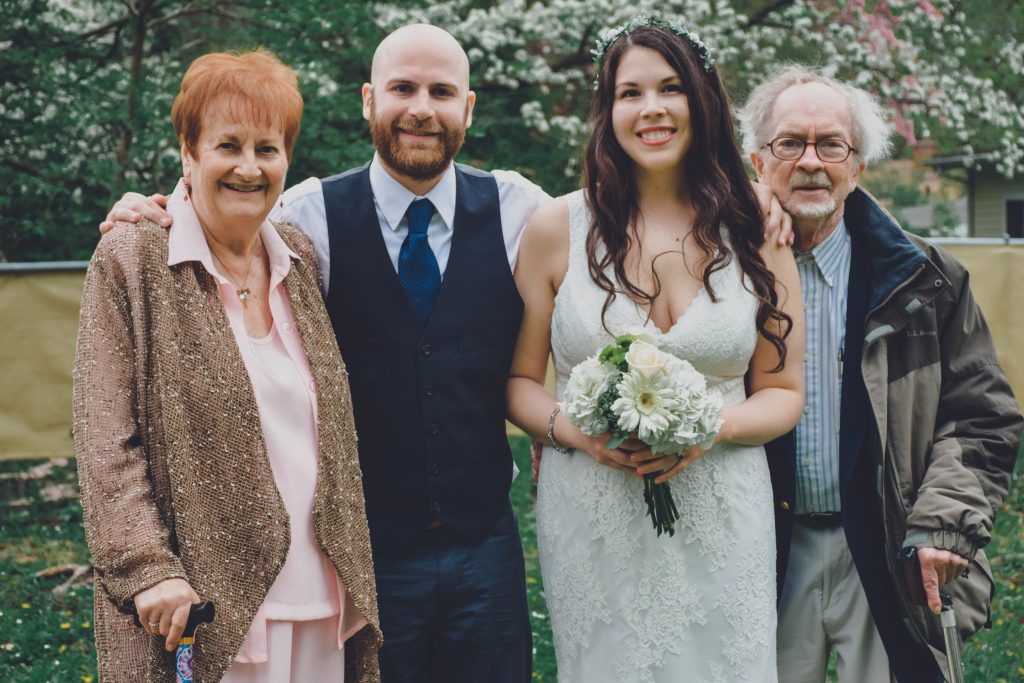 Ba at the author’s wedding after recovering from her hospitalization.