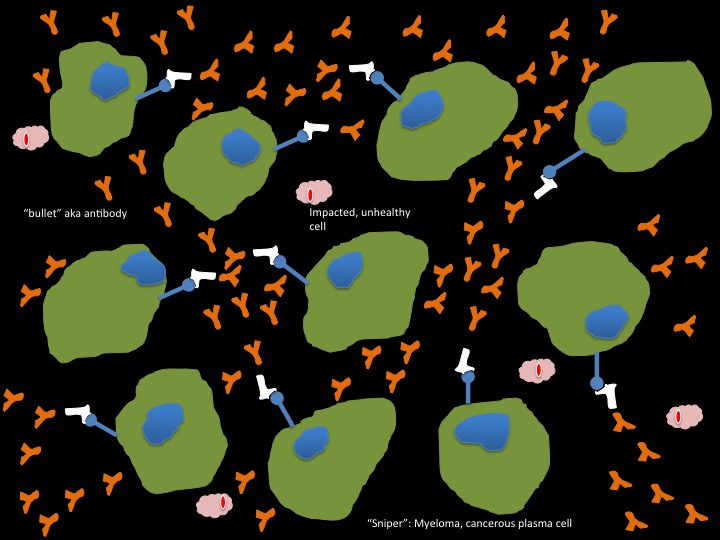 Home » Genetics » Multiple myeloma, a cancer of snipers and bullets 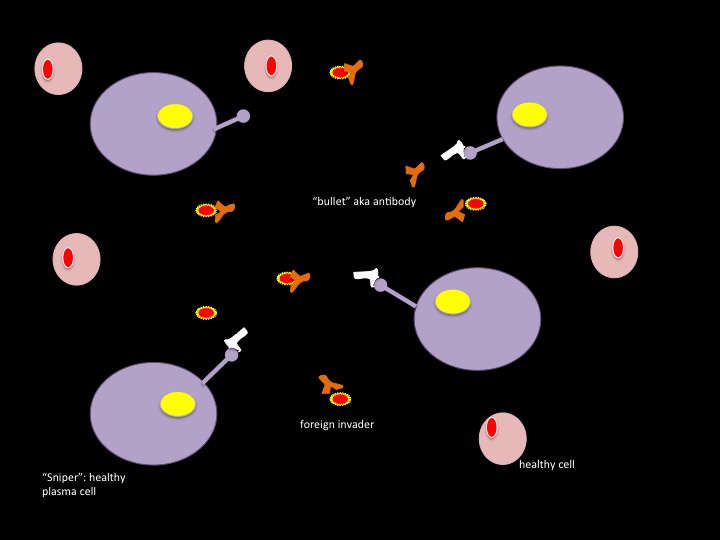 Plasma cells are like snipers, equipped to take out foreign invaders in the human body while keeping other cells in the body healthy//Credit: Kelly Tyrrell

Recently, UW-Madison researchers studied tumors from a patient with multiple myeloma to develop a new and promising approach to better understand the genetics of cancer. UW-Madison professor and lead researcher on the study, David C. Schwartz, described it as the “Google Maps” for the cancer genome because it allows scientists to zoom in and out on the genetic features that define multiple myeloma.

Multiple myeloma is a cancer that affects plasma cells, which a co-author of the recent UW-Madison study called the “snipers of the immune system.”

Plasma cells “lurk in the bone marrow and shoot out antibodies, which are the bullets of the immune system,” says Fotis Asimakopoulos, professor of medicine and multiple myeloma researcher and physician at the UW-Madison School of Medicine and Public Health. The cartoon above is a crude representation of how plasma cells do what they do.

“The plasma cells make these bullets and shoot the bullets to kill invaders,” says Asimakopoulos. “When cancer affects the snipers, there are too many snipers and there are also too many bullets.”

In multiple myeloma, there are too many snipers – or plasma cells – and because they are diseased, they make and shoot too many bullets//Credit: Kelly Tyrrell

This can cause all kinds of unwanted consequences in the body, leading to the signs and symptoms of multiple myeloma, including thickened blood, bone fractures, infections, pain and extreme fatigue. The “bullets” can also cause collateral damage to organs like the kidneys. Some patients will require stem cell transplants, to wipe out the diseased plasma cells and replace the bone marrow, where bone stem cells live. Most take medication to help keep the cancer at bay, but myeloma often becomes resistant to available drug treatments. Often, it’s fatal.

Schwartz, Asimakopoulos and their extensive team of researchers see their approach – which combines DNA sequencing, to read all the individual changes in the DNA of cancer cells, with optical mapping, which reveals larger infrastructure changes taking place within the genetic scaffold of cancer – as a promising way to help prevent drug resistance and potentially fight back against the snipers-gone-awry.

“The biological characteristics of multiple myeloma differ significantly between patients, and even within the same patient,” says Asimakopoulos. “Treatment for myeloma needs to be ultimately individualized to reflect the specific biology of the disease in each patient.”