Home » Biology » What is precision medicine in cancer treatment?

What is precision medicine and what does it mean for advancing cancer treatments?

Currently, most cancers that originate in the same organ or tissue are treated similarly. Precision medicine, sometimes referred to as personalized medicine, represents a potential shift in how cancers are treated. It first identifies those features that likely contribute to driving each cancer, and then offers therapies targeted to those features.

“Even in cancer types that originate in the same organ, there are many different diseases that are pretty unique,” explains Mark Burkard, MD, PhD, an oncologist and researcher at the UW Carbone Cancer Center. “What we’re hoping to do is identify those differences that may help explain clinically how a person’s tumor spreads and behaves, and then ultimately customize treatments.”

Those differences are, in most cases, mutations in DNA that drive cancerous cells to grow uncontrollably. With rapid advances in DNA sequencing technology over the past few decades, it is now quite simple – and relatively inexpensive – to take a sample of a patient’s tumor and sequence it for one or more of the hundreds of common mutations found in cancers.

“At the same time that we’ve learned to identify these abnormalities or mutations with sequencing panels, more drugs have been developed to target these specific abnormalities. Our hope is that these medications will stop the signaling that drives the growth of these cancers,” says Kari Wisinski, MD, an oncologist at UW Carbone. 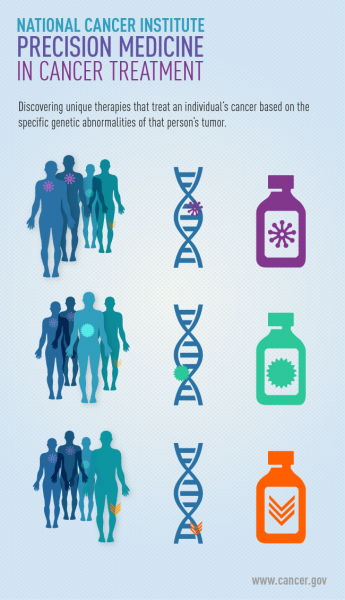 Precision Medicine treats cancers as a genetic disease, regardless of the tumor’s location. Patients’ tumors are sequenced to identify the genetic abnormality suspected of driving cancer growth and a drug that targets the specific abnormality is prescribed. Source: NCI

One example of a successful targeted approach is the BRAF gene in melanomas. Patients with a specific mutation in the BRAF gene typically respond very well to a targeted drug, and their cancers are better controlled than with other melanoma therapies. BRAF mutations are also found in many other cancer types, but the targeted therapy is only approved by the Food and Drug Administration for use in melanoma patients.

Running DNA sequencing tests on cancer samples as a standard of care happens only in a subset of cancers, such as melanoma, for which there are therapies that have proven beneficial through clinical trials. Even then, only one or a few genes are sequenced. A logical conclusion might be that if all cancers were sequenced, then the ones with, say, BRAF mutations would respond to the BRAF targeted therapy.

“But this drug has not been studied extensively enough in those other cancers,” Wisinski says. “With any of these targeted therapies, you can do the sequencing test and find the abnormalities, but I don’t think we can always know how to apply it clinically yet because we don’t have good, robust data to help us.”

So Burkard and Wisinski, along with many colleagues throughout UW Carbone, Wisconsin and the U.S., are actively pursuing research in precision medicine. Wisinski is the national lead on two of 30 targeted therapies in the National Cancer Institute’s precision medicine clinical trial, NCI-MATCH. Burkard is co-director of the statewide Precision Medicine Molecular Tumor Board (PMMTB).

In both cases, patients who are no longer responding to standard-of-care therapies can have their tumors sequenced. DNA sequencing for one tumor sample can identify around 300 cancer-associated genes, depending on which testing panel is used, and identifies the tumor’s abnormalities. If, for example, a patient with a non-melanoma cancer has a BRAF mutation, NCI-MATCH and the PMMTB are set up to allow physicians to prescribe the BRAF targeted therapy.

And while both NCI-MATCH and the PMMTB offer the possibility of a successful therapy to individual patients, they are also precision medicine research programs that seek to improve patient outcomes with evidence-based care.

“We are collecting data about how well the recommended treatment is working and use it to adjust our recommendations as we go forward, benefitting current – and future – patients,” Burkard says.

You can read more about UW’s role in the NCI-MATCH trial here, or the PMMTB here.

UW is involved in two Precision Medicine initiatives, the NCI-MATCH clinical trial and the PMMTB, a state-wide Board that reviews cancer cases and prescribes targeted therapies when appropriate. Source: NCI and UW Carbone.