Home » Art and Science » The Essence of the Arboretum

Along the walls of the orientation theater, in an alcove off the lobby of the University of Wisconsin Arboretum Visitor Center, hang seven murals illustrating the history of the land on which they rest.

Each of the nearly six-foot-long paintings vividly depicts a segment of the Arboretum’s history, from its ancestry underneath the melting glaciers to a vision of a sustainable landscape. Composed by Victor Bakhtin, a Russian artist, the paintings capture the spirit of the Arboretum, says Gregory Armstrong, the former director of the Arboretum.

The UW–Arboretum was first proposed by architect John Nolen in 1911, finally coming to fruition at its dedication by Aldo Leopold in 1934. But long before these men envisioned a restored oak-prairie and savanna in the middle of the city, the land where the Arboretum lies fed and sustained the Ho-Chunk people.

Armstrong had heard of Bakhtin because of a painting that George Archibald, a friend of Armstrong’s and the co-founder of the International Crane Foundation in Sauk County, Wis., had asked him to create. The painting was huge, showing a beautiful scene of the entrance to the ICF headquarters, populated by an abundance of cranes and other birds. 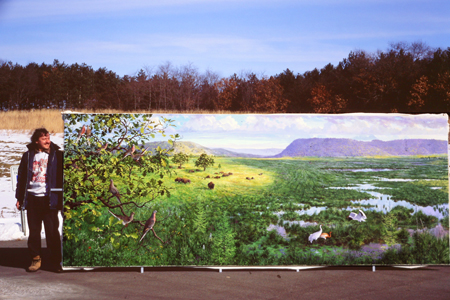 There was a tradition of including pieces of artwork in campus and university buildings and facilities, says Armstrong, and the Arboretum was in need of an artist to convey their scientific mission on canvas.

When he saw Bakhtin’s painting at the International Crane Foundation, with its attention to detail and ecological accuracy, he thought to himself, “that’s the guy I want.”

Bakhtin grew up in the Soviet Union, and became a well known natural history artist for scientific publications and journals. When the Soviet Union collapsed in the 1990s, Archibald invited Victor come work in the United States.

Later, Armstrong recruited him to create a series of artworks for the Arboretum. Bakhtin went to the site and spoke with the staff and researchers that worked there. A stickler for accuracy and authenticity, Bakhtin meticulously researched the content for the paintings.

And the work shows. 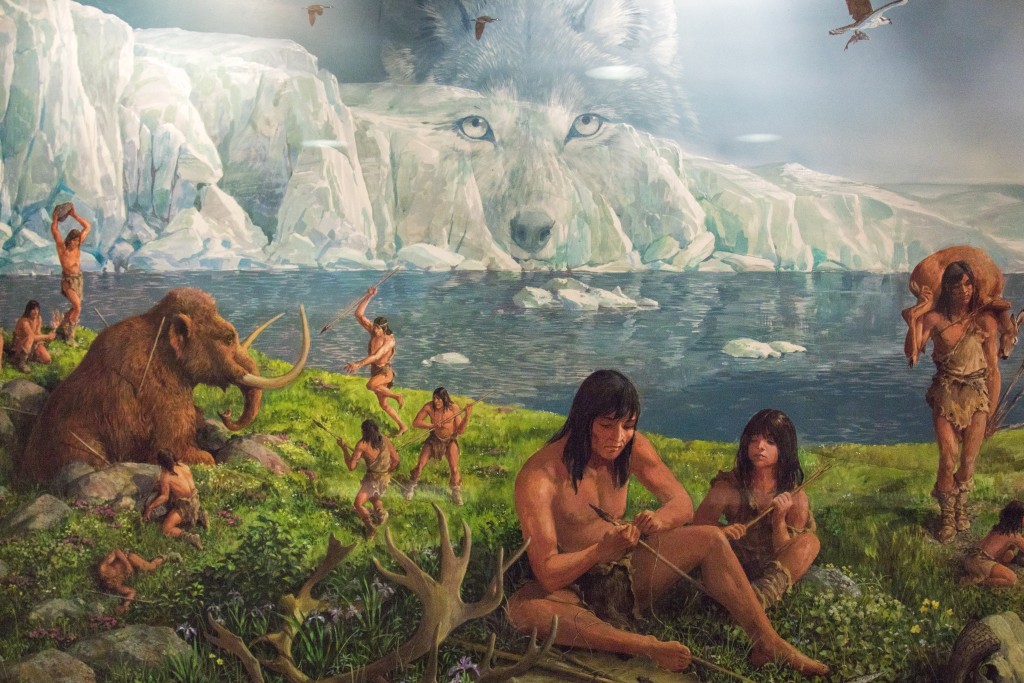 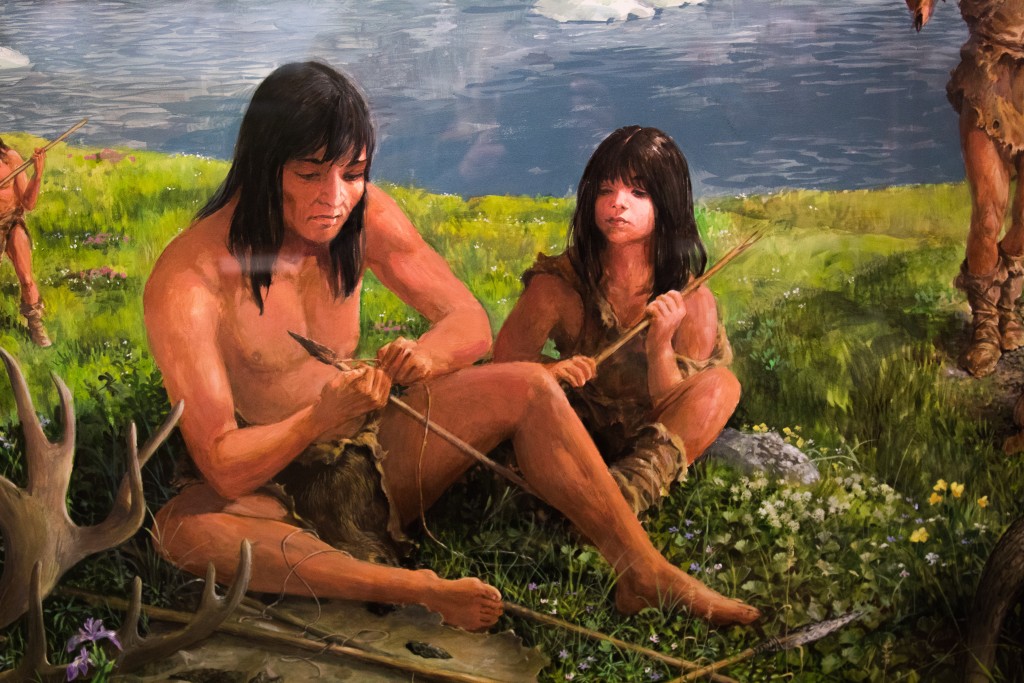 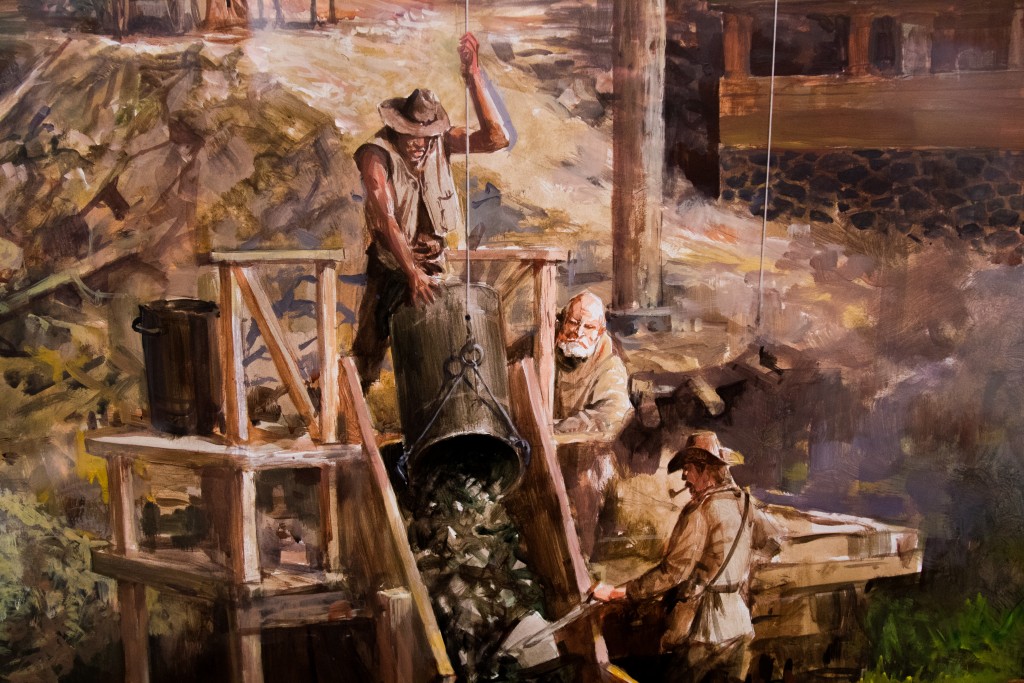 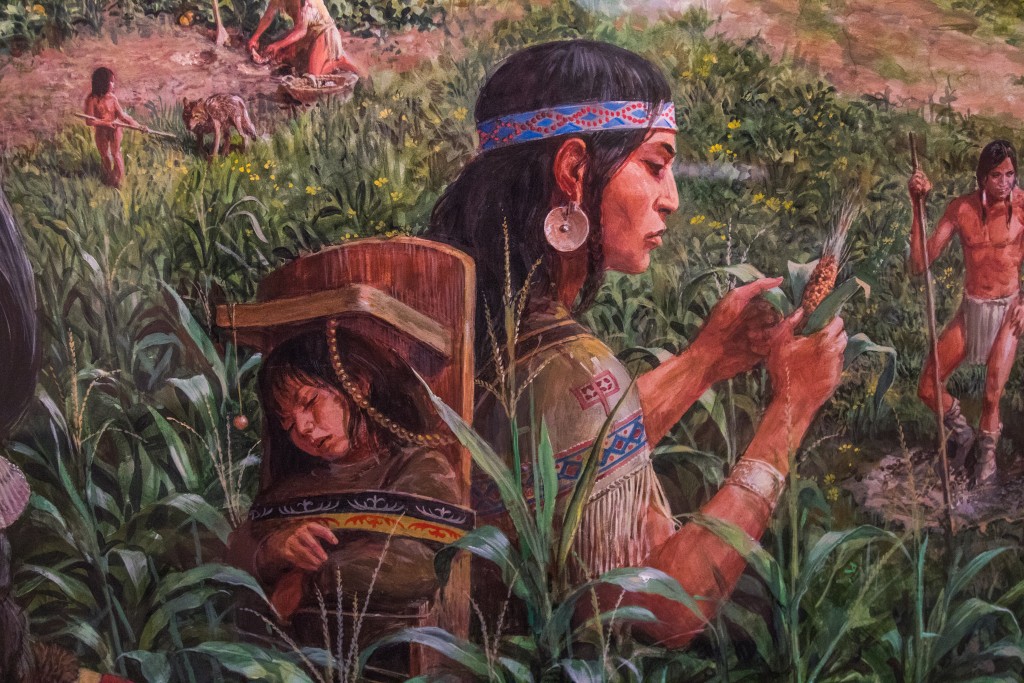 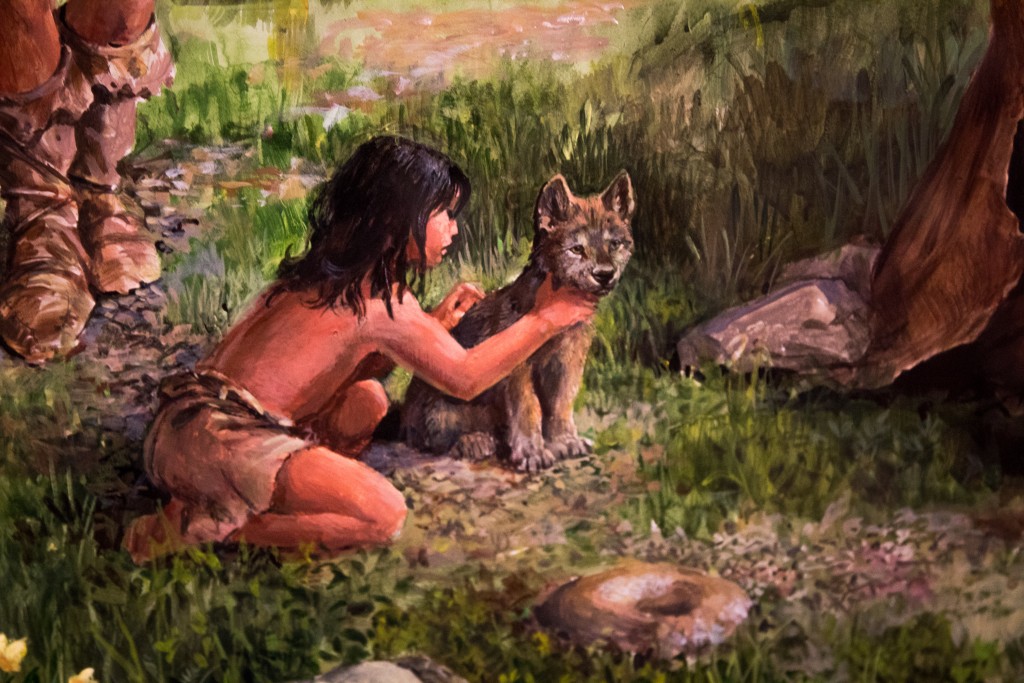 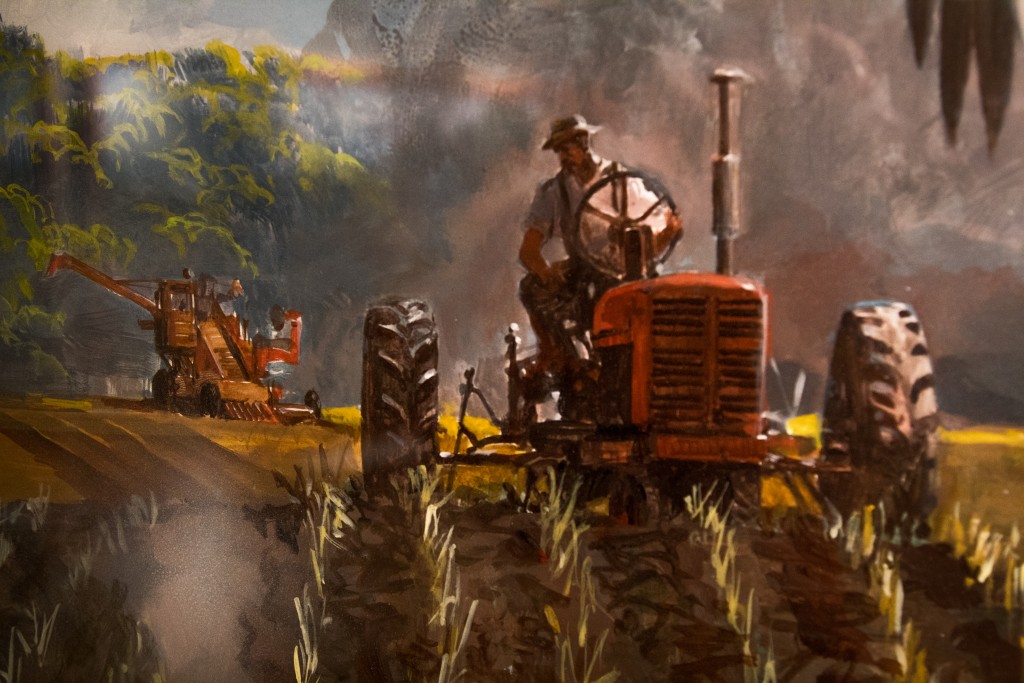 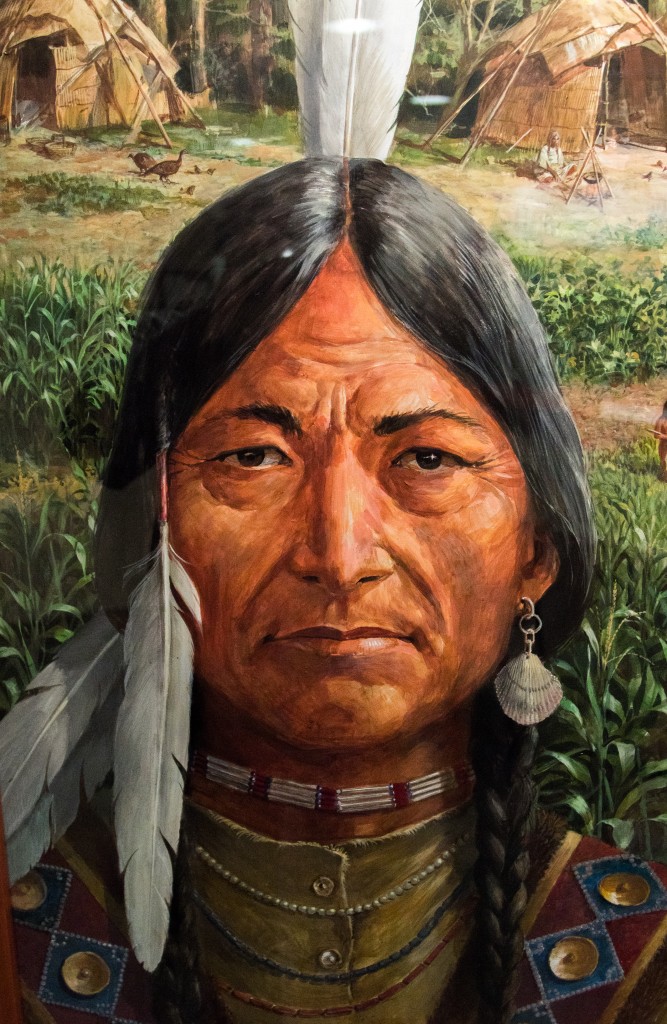 Bakhtin investigated archeological evidence, ecological history and consulted with Harry Whitehouse, a Ho-Chunk artist who offered Bakhtin information on the important cultural practices he would paint. The paintings are all on hardboard, and are the blown-up versions of some small scale studies that Bakhtin used to negotiate the final product with Armstrong and the Arboretum staff.

The paintings do not shy away from the painful history of westward expansion, something that Armstrong is grateful for.

“That’s a tough painting to look at,” Armstrong said, referring to the fourth painting in the series (header image, right side) that depicts the establishment of European colonies in Wisconsin.“But, it’s a statement of the reality.” The mural shows homesteaders pushing Native people off the land, and establishing European industries in their place.

Part of this history is also the damage that past practices have caused to the Wisconsin landscape. In the sixth mural, a studious Aldo Leopold is the focal point, surrounded by the political and ecological affairs of his day, such as the environmental movement, industrialization and the technological sophistication of agricultural practices that marked the second half of the 20th century when the Arboretum and the idea of ecological restoration were first gaining steam. 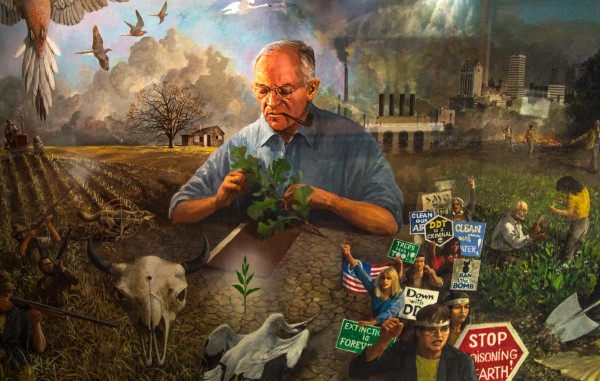 “And (the final painting) is showing some animals that have essentially been eliminated from the landscape here, and bringing them back like the elk and bison and prairie chickens, scissor-tailed kites and whooping cranes,” Armstrong says, gazing at the the prairie scene teeming with life.

Bison ranges historically encompassed a near-majority of the United States, from southern Texas into Mexico and all the way north into Saskatchewan and the Northwest territories of Canada, becoming extirpated from Wisconsin around the 1830s. Elk have a similar story, with efforts underway to bring populations back to northern Wisconsin. 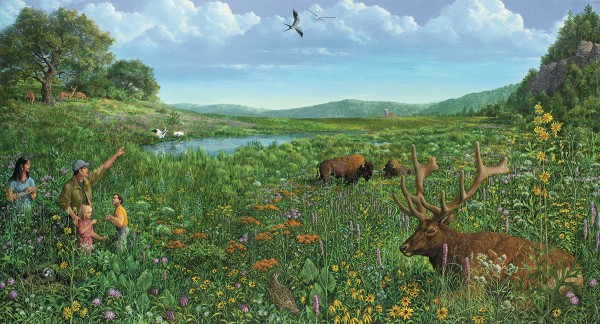 “All of these plants are recognizable native plants to prairies and savannas of Wisconsin,” Armstrong says, pointing out the orange butterfly milkweed, the tall yellow compass plants on the right side of the image, as well as the purple prairie clovers and the black eyed susans.

The series of paintings all lead up to “humans living in some kind of a sustainable relationship with the rest of nature,” Armstrong says.

“If (visitors) take the time to try to understand what (these paintings) are about, I think that they then will understand the essence of the Arboretum, and the significance of what happened here, and what I hope will continue to happen here,” says Armstrong.